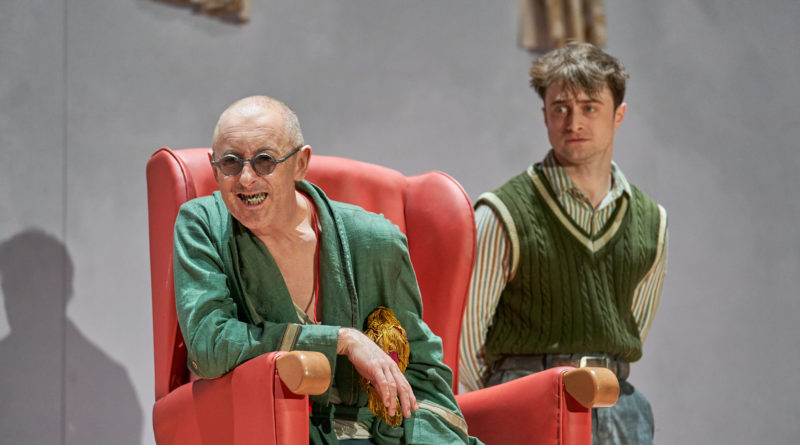 At the heart of so much of Beckett’s work is the darker side of symbiosis. We’ve all heard about the plover birds that eat the remnants from a crocodile’s teeth, getting their own meal and cleaning the crocodile at the same time. It shouldn’t work but, as each creature offers the other a benefit, it does.

In Beckett’s case, the symbiosis is less poetic but no less convincing. It comes from desperate, bereft necessity, two people in a void with no option but to be together. It’s true of Vladimir and Estragon in Waiting For Godot, together forever because there is simply no other option. It’s true of Pozzo and Lucky, the brutal owner and intermittently tragically eloquent slave who they come across – and it’s equally true of Hamm and Clov in Endgame, now playing at the Old Vic.

In true Beckett style the piece takes a classically wry look at despair, a theme that echoes through into the less ethereal, far more earthbound Endgame.

Set in a single oversized near-empty room, with two silver dustbins at the front, an item of furniture is located centre-stage and cloaked with a sheet. Clov (Radcliffe) lumbers around the room carrying the ladder that he needs to open the curtains that hide the small and pointless windows, 10 feet off the ground. This is classic music hall territory – the ladder swinging around near uncontrollably, him clumsily climbing and crashing down again, endlessly berating himself for endless mistakes – think Norman Wisdom but almost crippled with injury and endlessly torturing himself and you have the measure of the opening scene. Then the item or furniture is uncovered and is revealed to be Hamm (Alan Cumming) in an armchair on casters, wizened bare legs hanging over the front, all rotten teeth and blind eyes – and a dark relationship of need and abuse begins to unfold.

While the world outside crumbles away, the apparently once wealthy Hamm and his servant Clov live on, both reliant upon and full of contempt for one another. Neither can leave as they can’t exist without the other. Then of course there are the two dustbins, here incongruously silvered wheelie bins, home to Hamm’s parents (Jane Horrocks and Karl Johnson), grotesquely legless and doing little more than waiting to die. Ever since Harry Potter, Radcliffe has clearly had his pick of roles both on stage and screen, but he has struggled in either medium to shake the baby face and youthful spirit of Potter. In Endgame, thanks in part to exceptional movement direction from Sarah Fahie, there’s not a trace of the boy wizard. Though there’s much talk of time and history, of Clov arriving as a child, of Nagg and Nell approaching death and of the gradual end of civilisation that seems to be taking place both inside and outside the windows, there also has to be a sense that these damned characters have been here forever and will always be so. Radcliffe pulls that off with aplomb, the sense that the rituals of managing this space have gone on for time immemorial and that, whatever he says, it will continue on forever, is tragically believable.

Endgame plays at the Old Vic until Saturday 28 March