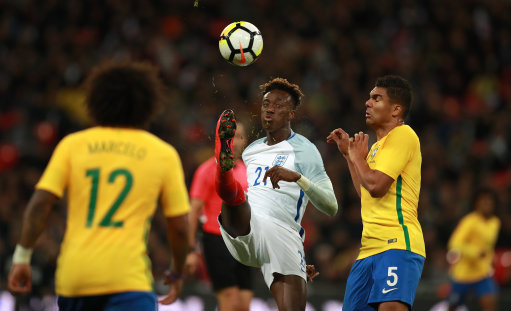 Chelsea’s super young striker Tammy Abraham is proving at club and now country that he has all the credentials to become a legend at Stamford Bridge – and he’s dreaming of doing just that.
Abraham, 20, is on loan at Swansea City and he has already notched four goals for the South Wales club who are struggling in the Premier League.
In the space of five days he had secured two senior England against the best two sides in the world Germany and Brazil –  and he’s not lost either match.
Following on from his debut against World Cup Champions Germany on Friday, the hitman came on as a second-half substitute against Brazil last night.
Level-headed Abraham is pinching himself that he has realised a lifetime ambition already and is keen to have more of it – starting in next year’s World Cup in Russia.
It’s been a quite extraordinary last couple of months.
He said: “Yes, it’s been amazing, obviously to make two senior caps is a big achievement for me, and proves that I am doing the right things. I just have to keep focused and working as hard as I can
Of the Brazil game, how it did it go?
“I think we defended well,” he said.
“Chances were limited as they are a team that likes to keep the ball, but we played well.
The result shows that we can compete against the best teams in the world – that’s a positive.”
Abraham is out on loan for the season, and can hardly believe what’s happened to him on the pitch.
“Of course, of course. I dreamt about it since I was young,” he said of representing the Three Lions. “And to be finally here on the big stage as well, I’ve just played here at Wembley, it’s an amazing feeling, indescribable really.”
The staff at Chelsea’s academy know all about his ability but also mention his love for the game and his unbounded enthusiasm for it – Abraham smiles in agreement.
“Yeah, for me I live football,” he said. “Football has always been in my heart. And every time I step out on that pitch I always want to prove myself and do the best that I can.”

And can he make the World Cup squad, can he see himself there?
“Definitely,” is his instant response. “I’m a person who believes massively in myself, and like the (England) coaches just said to us – we have to go back to our clubs and give 100 per cent and hopefully see what happens.”
It’s a great time to be a young England player – but that’s not always been the case. What’s been the difference?
“I thinks obviously it’s the new gaffer in charge,” he said.
“He is a person who believes in young players, And he obviously is looking at young players, so he wants you to do well. It’s up to you. He will pick you.”
The next England matches are four months away against Holland and Italy – now, Abraham has more pressing matters – securing the Premier League status for Swansea who are second from bottom in the division.
“It’s been tough,” Abraham admitted.
“Obviously results haven’t been going our way. Hopefully our luck will change round and things will go our way.”
Abraham, while focused on his loan club sees his England future at Stamford Bridge.
“Yeah, definitely,” He did.
“Hopefully that will be the dream really. Like I said, I have to do everything right this season and we will see what happens next season.
“Right now, I’m literally just focused on Swansea. Last season I was focused just on Bristol and this season focused on Swansea. So I just have to keep proving myself and hopefully I’ll get my opportunity.”