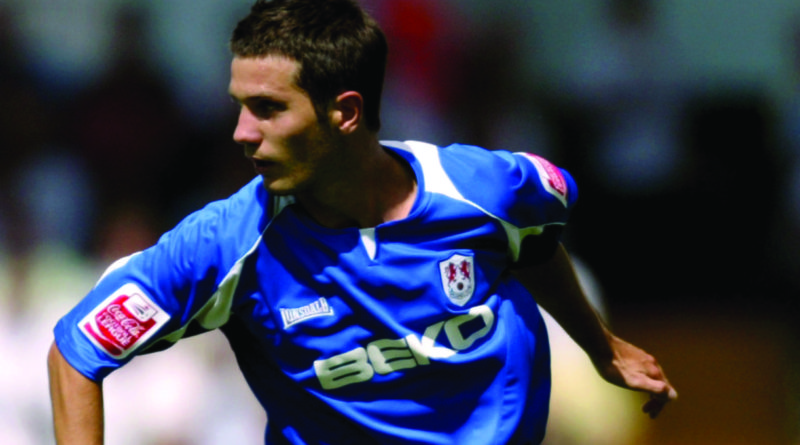 Millwall defender Mark Phillips was confronted by the club’s biggest guns just when he was trying to get into the first team, he has revealed.
But it wasn’t because he was out partying or failing to work hard. It was because they thought the teenage centre-back, who had been at his boyhood club for 10 years, would make a good striker.
He had scored four goals in as many games in the reserves. “As a defender, I knew what defenders
didn’t like – so that is exactly what I did when I played up front,” he said. “It worked quite well.”
Manager Mark McGhee, assistant Steve Gritt, chief scout Bob Pearson and reserves manager Kevin O’Callaghan all tried to persuade him he could do it.
But the Downham resident, training yards from where he was born and raised, never made the
switch. “It would have meant un-learning everything I had learned in the years up to then,” he said.
“One time Mark McGhee sent me on as a sub to play up front when we were losing against Oxford United at The Den.
“He just said go on and try to make something happen.”

The match ended in a 1-0 home defeat.
Phillips still makes regular visits to The Den.

“I have a lot of friends there,” he said. “My two boys are old enough to take, even if sometimes
they will say they are Arsenal and Liverpool fans.
“Gary Rowett has really swung them around. It is a great pity the season might have to stop at the wrong time.”
Phillips was at Millwall for 14 years. The sinuous centre-back was always recognised at The Den as having huge potential. But injury blighted most of his time with the Lions.

Two cruciate knee ligament ruptures, a broken ankle, and countless other niggles meant he never held down a place for too long in SE16. One injury happened a day after he had shaken hands with Paul Ince on a switch to MK Dons. The move collapsed and the injury kept him out for the rest of the season.
“My unusual build for a central defender might have contributed to the number of injuries I got,” Phillips said. “But it also meant I was faster.”
Phillips missed the entire season of the run to the FA Cup final, in 2003-04, because of his first cruciate knee ligament rupture, but scored his first Lions goal in 2004-05 – in a 2-1 home defeat by Sheffield United.
After Millwall, Phillips then played two successful seasons at Brentford – helping them to the League Two title – and four at Southend, including a League Two play-off semi-final and grabbing six goals in one 15-match spell.
He then had spells at AFC Wimbledon, before reaching the play-offs with Braintree and then Ebbsfleet – who he helped win promotion to the National League in 2017. The only game they lost with him playing was when he was sent off.
He joined another ex-Lion, Gary Alexander, at Greenwich Borough in 2017, but when that club ran into financial problems, left for Kingstonian, where he hung up his boots at the end of 2018-19.
He has found he can now focus on his children more, and support and follow son Charlie, who is at Arsenal’s academy as a goalkeeper – like his own father did before he passed away in January 2019.
“I had planned for retirement and was ready – but nothing prepares you for the void in your life,” he said. “It is a huge mental battle to get a sense of reality.
“There is no regular routine or focus. Some end up gambling it away.
“Not many of us have earned a huge amount either – the idea of taking 30 per cent of players’ wages is a joke because it will bankrupt the average footballer.”
These days Phillips is a coach and gets his greatest joy from guiding other youngsters through the skills
and the pitfalls they might need to know about to reach a high level – whether that is at a club or just for their enjoyment.
But he is a director of the firm 6occer Academy – after his preferred squad number – so will get no wages
from the Government during the lockdown.
“I hope we can be back up and running as soon as possible for the kids,” he said. “But there is the bigger
picture – your health is more important.”