Jed Wallace has set a challenge for his Millwall side – to stay unbeaten at The Den until Christmas.

The Lions collected 30 of their 44 points at home last season and they only lost four times in SE16 when they finished eighth in the 2017-18 campaign.

Wallace feels Hull City – the last visitors before the international break – showed respect with their line-up.

“[Jordy] de Wijs played well and they went big with Eric Lichaj and Matthew Pennington,” he said. “They tried to combat us.

“For teams to come to the Den and be happy to get a point is where we need to be. Last season we didn’t get to that with our home form – teams were coming and thinking  they could win.

“Myself and Pearcey [Alex Pearce] have said it in the dressing room: ‘Why can’t we go unbeaten until Christmas at home?’ Why not?  Why can’t we go on a run? 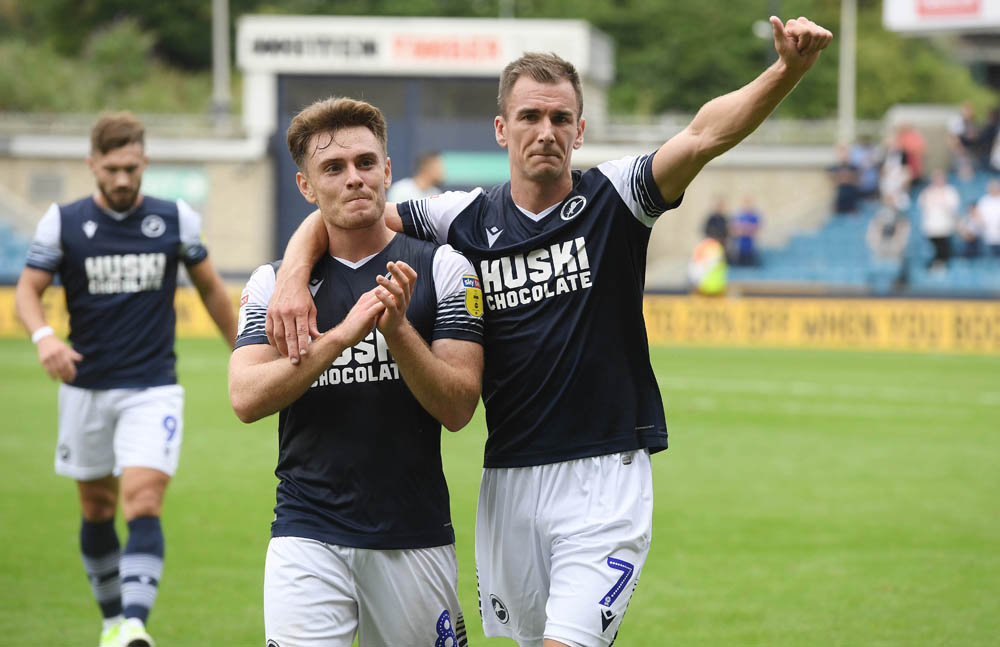 “Our home form is massive for us and we have taken seven points from nine there so far.

“We didn’t create enough chances for the amount of ball we had against Hull. We normally have 25 or 30 per cent possession and make lots of chances.

“We put the most crosses in the box of any team in the league on the day. We could’ve done with a little bit more quality in terms of picking someone out. When we have put 35 crosses into the box and had 11 corners you fancy us to create more than we did.”

Wallace has already had time out of the action before a fortnight of hibernation for the Championship – serving a three-match suspension after being sent off against Sheffield Wednesday.

Referee Gavin Ward brandished a straight red for his challenge on Kieran Lee before half-time. The Lions held on to the lead already given them by Matt Smith to secure all three points.

“I thought at the time it was a yellow,” said Wallace. “I gave him an opportunity to make a decision through bad play.

“If he had given me a yellow do any Sheffield Wednesday players moan about it? No. Does Lee Bullen cry about it afterwards? No.

“It felt like he was desperate to make a decision, to send me off. It was my own fault that I gave him an opportunity to do that.

“When the crowd get up at The Den it makes a difference. We’d won a couple of 50-50s and then didn’t get a foul on Matt Smith. The atmosphere ramps up and you feel like you can win a tackle.

“If I make that tackle 1,000 times I don’t hurt him once. It’s not a dangerous one. My foot isn’t off the floor. If you put it on freeze frame it looks like we are going for a 50-50 and he nicks the ball 0.2 seconds before me and I caught him.

“I understand why the referee sent me off, but he could have given a yellow card.”

But Wallace isn’t set to change his ways. And one of the reasons for that is the style of Millwall’s play.

“When you have 25 per cent possession then you are going to be trying to make tackles to get the ball back,” he said. “That’s how we do it. 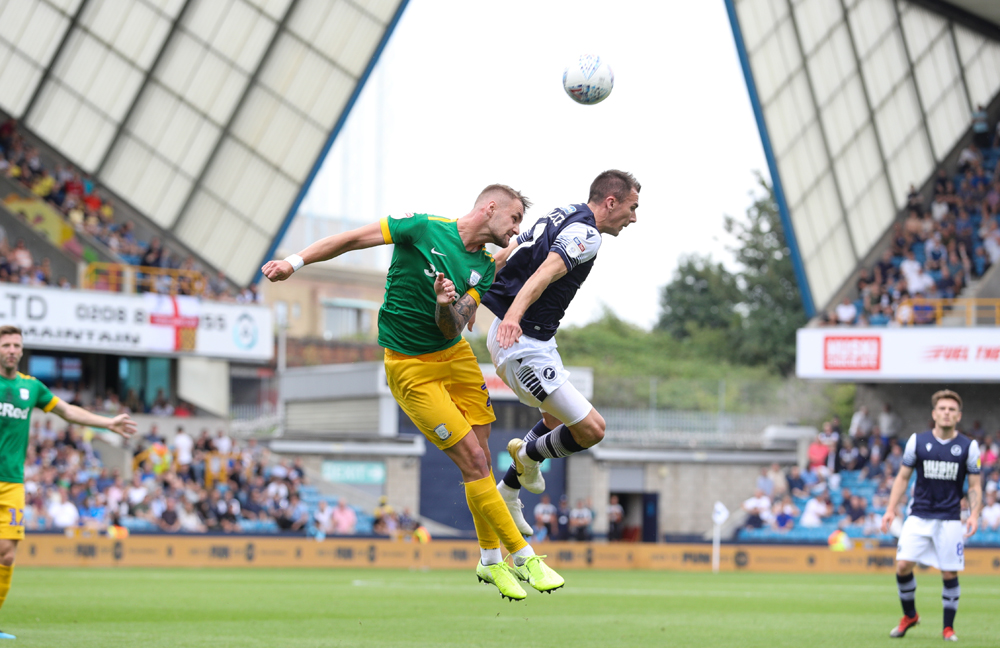 “Our wingers are not going to stand high, wide and wait for the ball, like you see Brentford doing and a few other clubs at this level. We are geared up to be hard to beat.

“Neil Harris teams are going to get yellow and red cards because we play front-foot football.

“It was good to get quickly back into the team and score a goal. You get confidence back and I’m really looking forward to Saturday.”

While home form looks set to be once again pivotal to Millwall’s fortunes – banking them on the road is imperative over the next few weeks.

Three of their next four are away, starting with tomorrow at Blackburn and then trips to Huddersfield and Luton after a derby visit by QPR.

Millwall did not win until New Year’s Day last season – and that came at an Ipswich side who already looked doomed for League One.

“This season we have more opportunity for counter-attacking football away from home,” said Wallace. “Look what we can do off the bench if we bring on Jon Dadi [Bodvarsson] or Matt Smith.

“We can sit in, get more ball or hit people on the counter. I don’t mean any disrespect to the strength in depth we had last season, but we will win games off the bench – 100 per cent.

“We’ve got people like [Jayson] Molumby and [Jason] McCarthy who haven’t been able to get on the bench. That is a proper football club in the Championship. 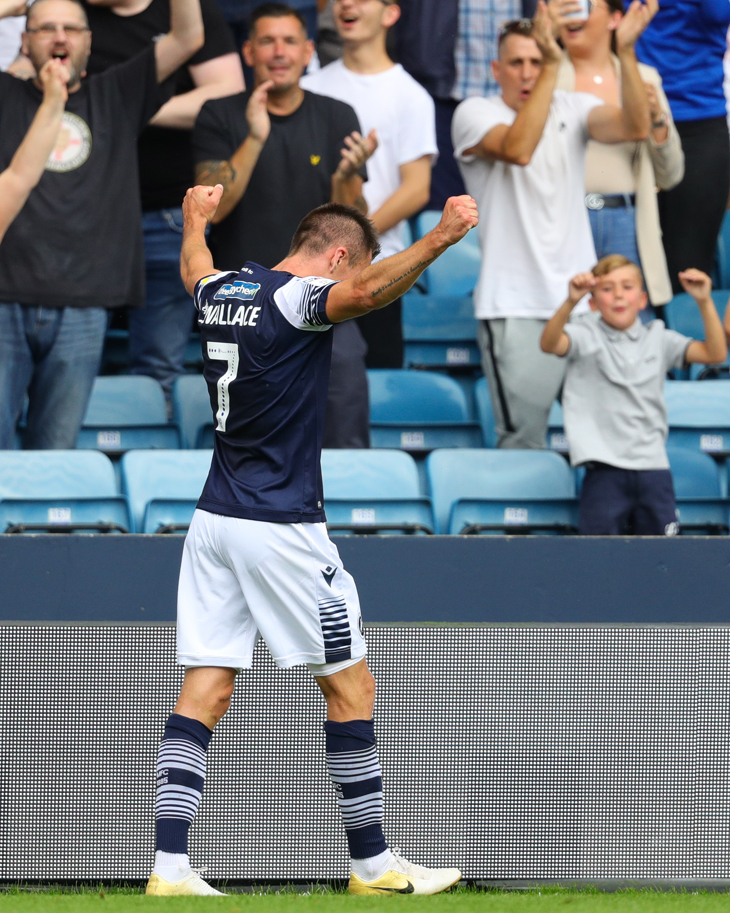 “I know I’ve got [Jiri] Skalak – an international footballer – up my arse trying to take my shirt off me.

“I’m a football fan, I analyse a lot when it comes to Millwall. The problem with the Championship is that you look at some games and think they are winnable, but it’s so hard.

“Wigan and QPR are games we should be looking to win but every club has got quality – QPR signed Jordan Hugill and he cost West Ham about £8million not that long ago. QPR go to Sheffield Wednesday and win, they go to Stoke and win. So they are going to be difficult, difficult matches.

“The home games are massive for us – especially the teams in the mini-league we are in. Those clubs looking to stay up first – Wigan, QPR and Hull.

“We go into them with a clean sheet mentality and try to hit teams  through set-plays and counter-attacking goals.

“I’m sure we’ll be alright. It’s nice to see the fans getting behind the team after a difficult time last season. The togetherness has come back a little bit, which we can help build success on.”

There has been an appeal from Harris for officials to switch on to fouls on his players when they are attacking set-pieces.

“It is hard for the refs,” said Wallace. “A lot of teams mark zonally. You saw a little guy Kevin Stewart [Hull midfielder] in there to honeymoon – to disrupt rather than mark.

“They have the big ones in line and three or four man-marking. But Stewart isn’t there to mark Coops, is he?  He is there to block the run.

“There are a lot of grey areas. They can’t all be given, otherwise we’d get 50 penalties a game. That would be good for me – I might score eight in one game!

“People mark us like that because we’re huge and the ball gets hung up to the back stick. Muzza [Murray Wallace] is a big, strong lad and yet he is fourth or fifth choice header.”

One thought on “Exclusive Jed Wallace interview: His take on red card v Hull City and a Christmas challenge for Millwall”