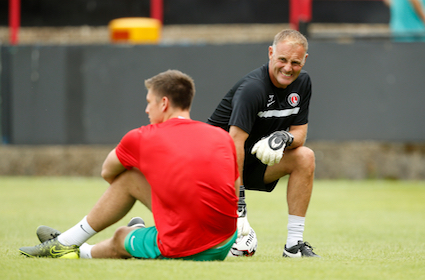 Lee Turner only has one aim as a goalkeeping coach – making shotstoppers develop to their full potential.

And Millwall’s new appointment certainly did that during his time at Charlton Athletic.

And while at Charlton the 48-year-old did a sterling job with Nick Pope and Ben Amos.

Pope’s performances at the tail-end of the 2015-16 season saw him sold to Burnley. At one stage considered a back-up in SE7, he is now with England at a World Cup finals.

Amos spent the last campaign on loan with Charlton, not exactly arriving with rave reviews from Bolton Wanderers fans. But he got better and better as the League One season progressed – proving to be an assured presence between the posts.

Now Turner will try to extract more out of Jordan Archer, David Martin and Tom King at Millwall.

“When I first started working with Nick he was a lad who was really low on confidence and almost belief about how good he can be,” he said. “It’s about showing you have faith in them – keep working on the areas they need to improve. Once they see improvement and that they are going in the right direction, then they trust what you are doing and you get more of that bond.

“In Nick’s case, we just grew together. It is being a good cornerman. Once they see that improvement, suddenly they are away then.

“They get in the side, really start believing it and you never know how far they can go.

“In Nick’s case it was instilling a bit of confidence into him. Nick got in the team and just grew and grew and grew. He was terrific towards the end of the relegation season and that got him the move to Burnley.

“For him to be at the World Cup finals is incredible. I love my work but it is all about them – they are the ones doing it. You’re in there helping as much as possible – keep pushing and pushing to try and maximise what they can do.

“All I want is for them to develop and go forwards – improve under my watch.

“Amos was in quite a similar situation to Popey. You pick them up. He was not quite mentally where you wanted him to be and even physically as well because he had not been playing. He didn’t really have much of a pre-season and Bolton wanted to get him out, he wasn’t getting the bulk of the work.

“He came to use a little bit behind and with catch-up to do. But his attitude was absolutely fantastic. I had to drag him off the training pitch at times. He wanted to catch up and he did. Once he got sharper then the improvements came with it.”

Now comes a new chapter for Turner at Millwall.

Lions boss Neil Harris has already said that his new goalkeeper coach – who has also had spells at Southend United, Crystal Palace and Bolton Wanderers – will assess what he has to work with.

Archer, Martin and King all have one more year on their contracts. It is not outside the realms of possibility that the Championship outfit could add another stopper to the mix if it is felt necessary.

“Tom was a scholar at Palace when I was there but a lot of water has passed under the bridge since then,” said Turner. “I’ve kept half an eye on him, like when he went to Stevenage on loan.

“I’ve watched Jordan from afar. David Martin did a pre-season with Charlton last summer and I saw him close-up then.

“You’ve got a picture in your mind of where they are at but you can never tell until you are in there day in and day out working with them.

“When I go into a club you look at what is in-house, you look at their potential and age – is there room for development? How far can they go? Then there is constant dialogue with the manager. Some managers want different types of goalkeepers and you have to work around that. They want different strengths. Can you give the manager the ammunition they want on a match day? He has got to feel safe on a match day, or as safe as he possibly can.”

Turner’s playing career never saw him play professionally. He had spells with the likes of Ebbsfleet and Margate.

“I bounced around the non-league circuit – the Southern Premier, as it was then, and the Conference. I was always interested in coaching. I was a student of the game, a deep-thinker if you like.

“Fortunately for me as I was winding down my playing career I got a chance at Southend United to go in as goalkeeper coach. Steve Tilson, who was in the academy then, recommended me to Rob Newman, who was manager at the time.

“I had eight years there, an extended apprenticeship.”

Turner left Roots Hall for Palace in January 2011 – tempted away by Dougie Freedman. He followed the Scot to Bolton in December 2012 before a return south to Charlton in July 2015.

There he worked with seven different bosses – when you add in caretaker appointments – initially starting with Guy Luzon. How did the foreign appointments differ in their approach?

“I felt the continental coaches just concentrated on the grass – that preparing of the team. They didn’t really manage the club.

“Russell [Slade] came in as an all-round manager, more British-style who managed everything around the club.

“I was desperately disappointed with the relegation in that first season. It was a big frustration.”

Millwall are a progressive club under Harris, a strong presence who has so impressively re-established an identity which was badly lost under predecessor Ian Holloway.

“What I looked at was the stability,” said Turner. “The chairman has been there a long time and the management team that is in place seemed like a really good group.

“Neil has been there just over three years, everything seemed organised and the structure was good. There is Championship football as well, all of those things were very attractive for me.

“I’m self-driven to push my lads – I drive them every day. I get the impression the Millwall management team do the same to maximise what they have got. I think we’ll work well.”

Hard work and dedication is needed to be at the top level for a sustained period of time.

And he cites examples.

“Julian Speroni – what a guy and what a gentleman. He was Mr Consistent. Again he has a terrific work ethic. Those guys don’t stay doing what they are doing without that.

“The lads that don’t quite have that mindset are the ones who can fall away. Speroni has been around for years and never lets his standards drop.

“At Southend we had Darryl Flahavan who was only 5 foot 10 but stayed number one for a number of years, he maximised what he had. Adam Bogdan was a great worker but was plagued by injuries, quite a few knee ones.

“The lads who do well are the ones who really buy into what we’re doing.”