Activists have been seen carrying a coffin through Wandsworth as part of a protest against council’s lack of action about climate change.

The pallbearers formed part of Extinction Rebellion’s “March for Life” which saw residents join forces with activist groups to protest against Wandsworth council’s failure to address the problem of toxic air.

On July 24, members of XR Wandsworth were joined at the march by representatives from Wandsworth Stand Up To Racism, the Save York Gardens campaign, Putney Pollution Busters, Little Ninja UK and more than 100 residents.

Six protesters with white death masks carried a coffin to represent the 300 Wandsworth residents who die prematurely each year due to air pollution.

When the protest reached Tooting Broadway, a ‘Tree of Life’ grew from the coffin and passersby wrote messages to Wandsworth council on ‘leaves’, which were hung on the tree.

Messages included “Be brave. Make the changes needed for us to breathe” and “Wake Up Wandsworth, clean air is not a luxury”.

Speaking at the protest, David Smith of Little Ninja UK said: “We shouldn’t have to bully and embarrass the Council to look after our kids. That’s their job, that’s what they’re supposed to do.

“We’re talking about an emergency – a climate emergency and an air pollution emergency.” 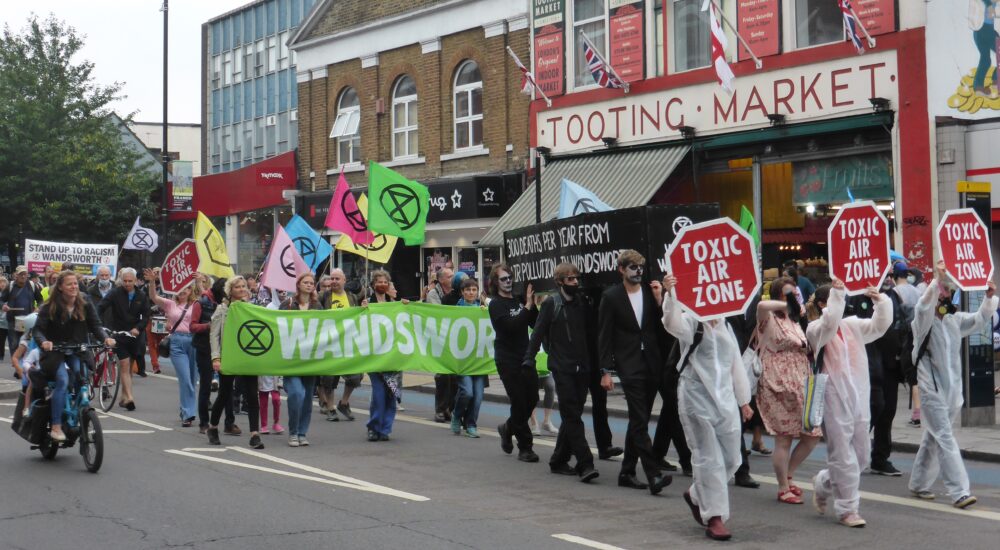 The protest is part of XR Wandsworth’s Wake Up Wandsworth campaign in response to the council’s failure to act on the climate and ecological emergency, which it declared in July 2019.

The campaign was launched on April 7, when protesters declared themselves to be ‘in open rebellion against Wandsworth council’.

Four out of ten of London’s worst air pollution areas are in Wandsworth and Putney High Street has the second highest levels of NO2 in London at 58mg/m3. The legal level is 40.

The first of XR Wandsworth’s four demands of Wandsworth Council is to reduce air pollution to within legal levels by May 2022.

The group’s other three demands are around trees and green spaces, food waste collections and divestment from fossil fuels.

XR Wandsworth is also calling on the council to convene a Citizens Assembly to help the council work out how to reduce air pollution.

A spokesman for Wandsworth council said: “The council is implementing a vast range of measures to help us achieve our ambitious target of becoming a carbon neutral organisation by 2030 and which will help improve air quality. This includes action to green our vehicle fleet and our pension fund, plant thousands of new trees, explore food waste recycling, support the switch from petrol and diesel to electric vehicles and introduce energy efficiency measures in our housing blocks.

“We have secured funding for e-cargo bikes for our services and also local businesses, moved to purchasing zero-carbon renewable electricity, installed dozens of bike hangars, overseen the third highest number of school streets in inner London and implemented the second highest number of publicly available EV charging points of any local authority in the country.

“Our efforts to date have been positively highlighted in an independent report produced by University College London which evaluated councils on their ability to lower carbon emissions.  This report placed Wandsworth 3rd out of all councils evaluated, ahead of Oxford, Nottingham, Sutton, Islington, Brent and Lambeth. The report’s authors recognised that we are delivering real action against our climate change commitments and judged us to be out-performing other local authorities.”