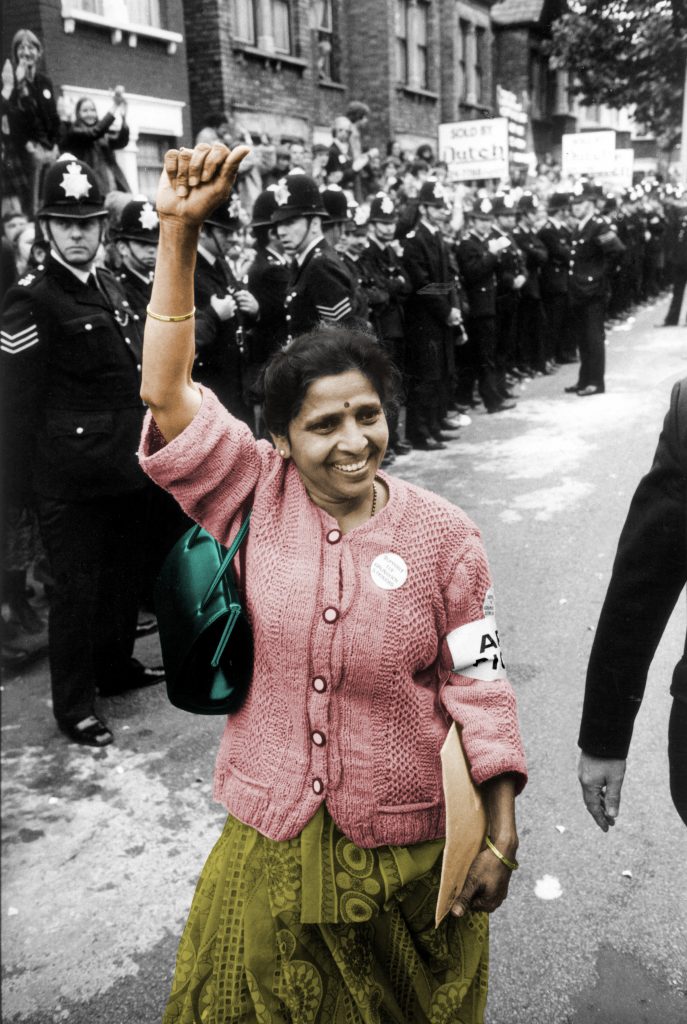 Many people in Britain, my parents among them, remember 1976 as the hottest summer on record, but it was famous for another reason too. On Friday 20 August 1976 a group of workers, led by Jayaben Desai, walked out of the Grunwick Film Processing Factory in protest against their working conditions.

This was a very particular community of workers. A majority were of South Asian origin, from families that had settled in countries in East Africa during British colonial rule. When Kenya, Tanzania and Uganda gained independence in the 1970s, many of these families were forced to flee and many, having British passports, came to the UK in search of a new life free of persecution – and in search of work.

A former worker at the Grunwick factory said, “There was no question of whether you wanted to or not – you had to work, so you did. And wherever you found work, you had to take it. It wasn’t that you were educated, so you only wanted certain kind of jobs – we had to work in factories and that’s how we brought up our children. We used to have people working for us, and now we had to work for others. That’s life.”

However, working conditions in the factory were appalling, stripping the employees of their dignity despite their determination to earn a living and support their families, so finally Desai led the workers out on strike – a strike which was set to change the way trade unions looked upon migrant workers in this country. After a few months of picketing by Desai and her co-workers the cause of the Grunwick strikers was taken up by the wider trade union movement, despite a reputation for disregarding the plight of migrant workers. By June 1977 there were marches in support of the strikers, and on some days more than 20,000 people packed themselves into the streets around Dollis Hill tube station to take part in the protest.

The strike ultimately failed but the ripples it sent out across the country and down the years were astonishing. Desai herself said “Because of us, the people who stayed in Grunwick got a much better deal. When the factory moved, the van used to come to their home and pick them up because it was difficult for them to get to the new place. Can you imagine that? And they get a pension today! That was because of us, because of our struggle.”

In 2016 Desai was included in the Radio 4 Woman’s Hour Power List, celebrating the seven women who have had the most impact on British women’s lives over the past seven decades. Now her story has been turned into a stage play by writer Neil Gore. The show, titled We Are The Lions, Mr Manager after a quote by Desai comparing the Grunwick factory to a zoo, has already enjoyed a sell-out run at the Tara Arts Theatre in London and now it comes to Greenwich Theatre for one special performance on 13 April.

“Her resolve and courage should be remembered and celebrated” said Gore. “Grunwick raised many wide-ranging questions about trade unionism, rights in the workplace and dignity at work – themes that still resonate and are relevant today.”