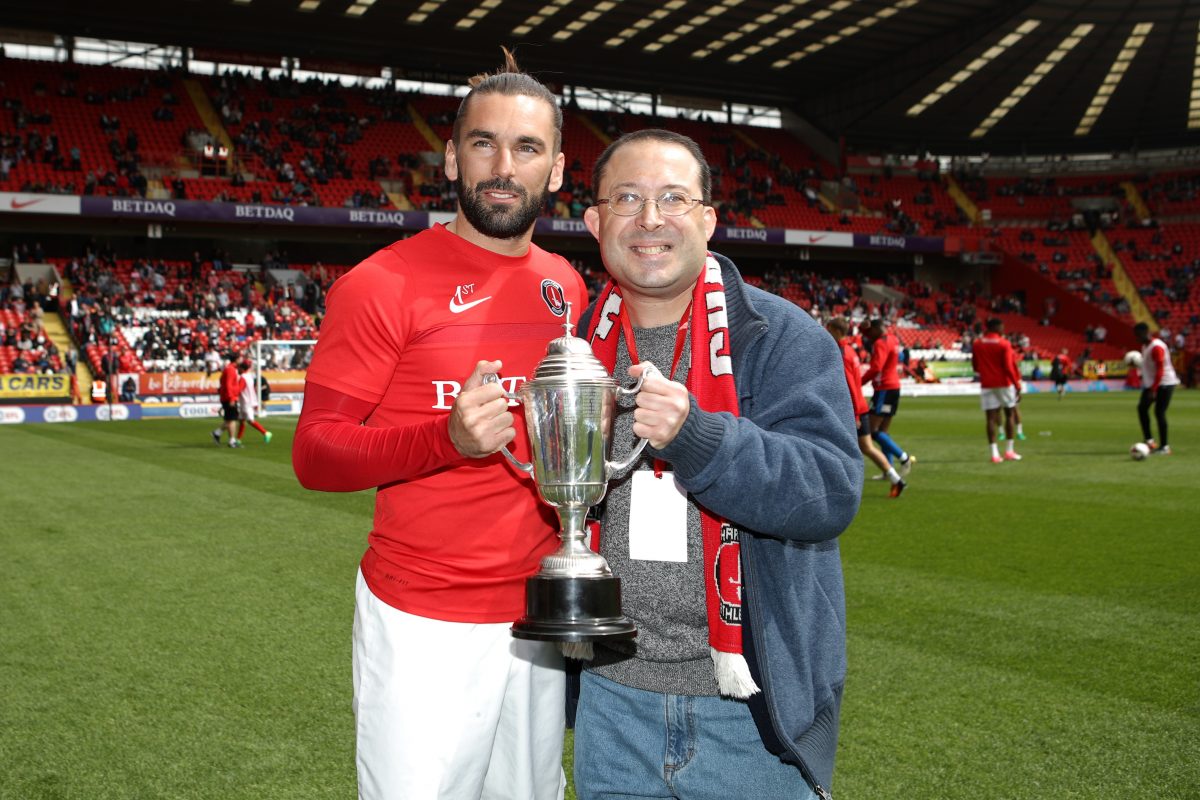 To most of us, missing a game of football because of a back twinge would be a minor inconvenience.

But for one Charlton fan, it was a more than that – because Ollie Lewis missed his first Addicks match, home or away, in 19 years. The 43-year-old had been to 887 consecutive first-team Charlton games, without missing a single one, stretching back to 1999.

But the 520-mile round trip to League One rivals Blackpool last Tuesday night was just more than he could manage. Ollie, from Blackheath, said: “It felt strange not to be there on Tuesday.

“It becomes an addiction almost. You feel you have to be there.”

The freelance administrator had to pull out of the trip after developing a back problem over the weekend. This was the first Charlton match he had missed since Barnsley away on December 4, 1999.

Ollie said: “You think all that time that the run goes on – when is something going to come along either to yourself or a relative, a health issue? But up until this week, I had been lucky.”

To make matters worse, Ollie’s brother, Seb, is still on to make 1,000 games, as he has reached 968
consecutive matches, a run stretching back to February 1999. Ollie said: “I love the game and I love the team. Way back when it started, I don’t think either of us envisaged that it would continue for such a long run.

“It sort of kept going. Then, after a while it was like a drug, I suppose. You thought, ‘I want to keep
this going.’”

The brothers were introduced to the club by their father in the early 1980s. They were there celebrating
Charlton’s dramatic play-off victory in 1998. They have traveled north of the river to watch the Addicks beat Arsenal 4-2 in 2001 and trudged up to Anfield on Easter Monday in 2004 for a 1-0 win.

Ollie said: “The club is the major social event of our lives.

“I get to the ground about noon, have a bite to eat, start to meet a few people, and then go in as soon as they make the announcement that the turnstiles are open.

“I used to have a few pints before the game, but I’ve stopped that now.

“I like to keep a clear head for the football.”

With Charlton’s latest run of form, Ollie may well be turning ba ck to the booze. Their 1-0 defeat by the Seasiders on Tuesday came after a stoppage time goal from Blackpool’s Jimmy Ryan.

He said: “Over time I have learned to take defeat in my stride. But when you concede a goal in stoppage time it hurts.

“You come away feeling how on earth did we throw that one away.

“I’ll support them whatever happens, though.”

Ollie was awarded the fan of the season award in April last year, which he describes as one of the “proudest moments” in his life.

As a result, he presented Ricky Holmes with his Player of the Year award. A spokesman for Charlton Athletic said: “We’re sorry to hear Olly missed Tuesday’s game against Blackpool and we wish him a speedy recovery.

“His support over the last two decades has been phenomenal and was recognised by Charlton fans last season who selected him as Supporter of the Year for his commitment.”

Are you or do you know a super fan who can match or better Ollie’s achievement?
Email calum@slpmedia.co.uk