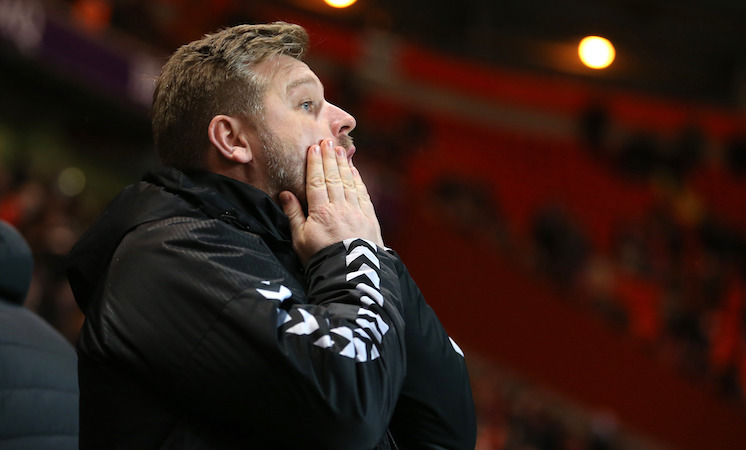 Charlton’s propensity for conceding late goals is hampering their top-six hopes – and we’ll only find out at the end of April just how costly it has been.

If the Addicks do get into the play-offs then it all becomes immaterial. A reset for every club that extends their season with no major need for a post-mortem for the South

Londoners, whose chance of snaring one of the two automatic spots seemed over a fair while ago.

But if they miss out, then their results so far in February will have a major bearing. Oxford United, Doncaster and Bradford have all fought back and deprived Karl Robinson’s side of seven extra points. That would have put them on the same total as Scunthorpe – 55 – and with a healthy buffer on the chasing pack in the top 10.

Instead they still have plenty to do, even if they have two games in hand on the clubs above and below them.

Those late turnarounds are trying everyone’s patience – especially the fans. The criticism is more severe and aimed at the manager when there is an inability to see out a result from a position of strength.

Karl Robinson’s post-match rant at referee Nicholas Kinseley focused on his lack of protection for his flair players. But he was also asked if that was an attempt at deflecting away from yet another disappointing ending. The only deflection the Liverpudlian felt mattered was on the cross which Bradford sub Tyrell Robinson powered home.

Charlton had dominated from start to finish at Doncaster. But that wasn’t the case in midweek.

They are pleasing on the eye – Tariqe Fosu, Jay Dasilva and Sullay Kaikai capable of rapier dribbles – but they also have possession that doesn’t hurt teams enough.

Their periods of ascendancy, Mark Marshall’s shot pushed onto the left post by Colin Doyle as they began with a bang in a dominant first 20 minutes, too often fails to provide enough rewards.

Josh Magennis’ deft header from Marshall’s cross put Charlton in a deserved lead but they failed to build on it against a Bradford side who did not force Ben Amos into significant action in the opening 45 minutes.

That was to change after the break. The on-loan Bolton man’s save from Adam Chicksen was one you would expect him to make but Bradford went on to have clearcut chances which could have put them into the lead, let alone level.

Magennis did a terrific job clearing Paul Taylor’s shot off his own line while Amos was beaten by Tony McMahon’s free-kick, only for the bar to come to the rescue of the hosts.

Charlton failed to get an effort on target in that period, Fosu whipping a drive over the bar and then scooping wide when picked out by Marshall inside the box.

Kinseley was poor. He failed to notice a clear push by Charlie Wyke on Magennis in the box in the first half and then initially cautioned Romain Vincelot for a foul on Fosu when McMahon was the offender.

Bradford’s gameplan was clearly to stop Fosu from gaining momentum as he broke forward – his temperament being tested as he picked up a caution for a late tackle on McMahon.

But would Robinson raise the issue if his team had won 1-0? I’d have to say no.

Whatever the reason, Charlton have an inability to lock down games.

Part of that is down to the attacking nature of the side. Jake Forster-Caskey and Ahmed Kashi do a good sweeping job down the middle but there are definitely inviting inroads to be made down the flanks.

Particularly that Charlton left-hand side.

Dasilva is exhilarating in full flow – one run in the first half carrying him past at least three Bradford players – but so many goals have come from that area of the pitch of late. The latest of those coming on Tuesday.

Wyke was in a pocket of space for the goal. Ezri Konsa’s attempt to shut down the threat was unsuccessful as the big striker’s delivery looped invitingly into the path of Robinson, who got there before Chris Solly to beat Amos at his near post.

formation and a lack of a plan B are problems. Yet there are plenty of clubs who have had success with a tried and tested formula – Millwall’s 4-4-2 under Neil Harris a prime example. And Magennis was not isolated, with Charlton usually a 4-2-4 when in possession.

Until they stop looking so fragile under pressure, things are not going to get any easier. Or less stressful. The Addicks are too often gaining points the hard way.