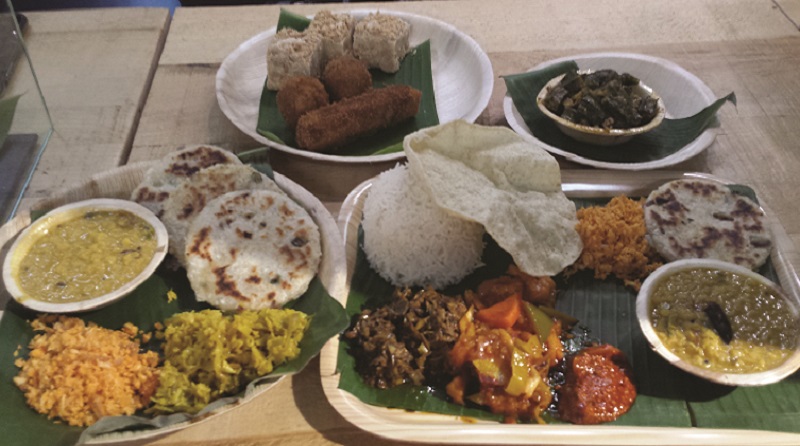 There’s little doubt that Boxpark Croydon has well and truly shaken up the town’s culinary credentials, with now some 40 restaurants sitting snuggly under one roof. But what does that mean for the restaurants themselves?

Huge competition, that’s what. Sadly each time I visit, I notice closures since my previous visit. Therefore, when I spot a new kid on the block, a fleeting thought about how long they’ll last usually floats through my mind.

K&K, open only since last autumn, should give master classes in how restaurants can pit themselves head and shoulders above the rest.

Its position has been to bring authentic street food from the owner’s Sri Lankan homeland to the South London masses, and it’s fair to say this strategy has been met with wide and heartfelt applause.

For me, the food was among the best I can remember tasting at Boxpark Croydon, since it opened in 2016.

Don’t get me wrong, most experiences have been good, but this was exceptional – so good that I spent the following few days telling anyone I thought (or perhaps that’s hoped) would be interested in learning about my most recent find.

Apart from the name that is. A restaurant’s name is so important – it’s the first opportunity to draw the diner in, either because it paints a picture of what they can expect or perhaps leaves them wondering what’s behind a quirky name.

K&K does neither, but perhaps I’m missing something. I discover that K&K has a rather nice back story, which goes that the three founders were so tempted by the delicious smells of street food carts next to beaches in remote villages in Sri Lanka, they would beg their parents to stop for a snack and subsequently felt compelled to share the culinary secrets of their motherland.

Everything the restaurant offers up is spot on and elevates the average Boxpark Croydon experience to far higher ground.

First off, it has indoor seating, which is a huge plus but not for the reason you might expect.

It’s not the temperature I’m worried about, Boxpark Croydon has this covered with freestanding and overhead heaters that do the trick, even in our recent cool clime.

For me, it’s the noise factor. My visit was on a Friday night when the Boxpark Croydon is rocking and the music turned right up.

Added to which, one of my dining companions is hard of hearing, so the inside spot was most welcome.

Everyone else seemed happy to sit in the main throng, so we had the place to ourselves from 8pm until the restaurant closed at 11pm.

Seated right near the action of the kitchen, it made it particularly difficult to fight off greedy urges of, as my toddler would say, “More”.

In truth, I didn’t put up much resistance. The roti was just too damned good.

I am well used to Asian and Caribbean roti, but Sri Lanka’s contribution to the roti world is new to me, and if the food stuff were not heavenly enough, this one has coconut at its centre, adding a sweetness.

The menu is compact and I wanted to try it all. Banana Leaf Meals, rightly described as “variety on a plate,” seemed the best way to have it all. These meals are inspired by the large dinners the owners’ parents hosted for visiting family and friends.

One of the owners said: “Our mothers would be in the kitchen all day preparing a feast, and when we start sitting down to eat, we would be amazed by the number of different dishes on the table.

“There was something for everyone and served to us on banana leaves.”

This particular banana leaf hosted white rice, two vegetables of the day (curried okra and curried potatoes), appalam (a large, thin, crispy cracker which looked like a poppadom), lime pickle, and dal as the central dish.

The selection and diversity of flavours encompassed blew me away.

And of course, there’s a green message not to be forgotten here. The tradition of serving on banana leaves dates back centuries, and they contain large amounts of polyphenols that are natural antioxidants, also found in many plant-based foods and green tea.

Food served on the banana leaves absorbs the polyphenols, which it is said help to prevent many diseases. The leaves also have anti-bacterial properties.

We couldn’t leave without trying a few more dishes – Mutton Roll – with its crispy shell and soft, juicy inner of mince and potatoes, seasoned with freshly ground spices and herbs.

And for dessert, Milk Toffee – Sir Lanka’s answer to fudge, fragranced with cardamom.

We didn’t manage to get round to Kothu Roti – probably one of Sri Lanka’s most famous dishes – so we’ll back soon for this.