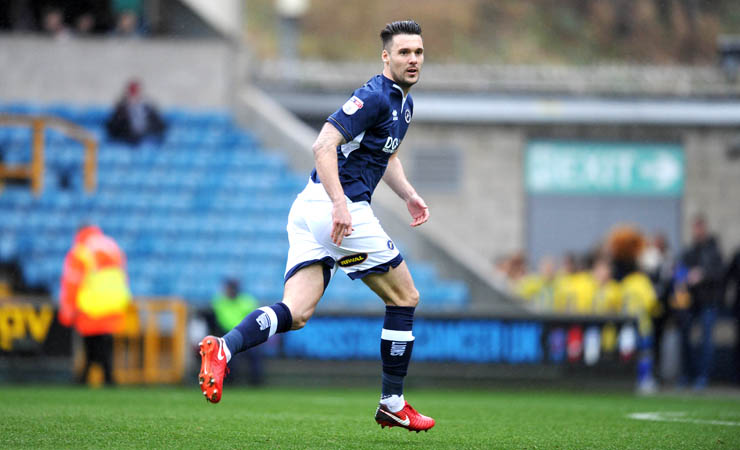 Jason Shackell knows where he will be until the start of May – but beyond that his future is uncertain.

The 34-year-old defender signed on loan for Millwall towards the end of the January transfer window.

Shackell has been the subject of three big-money moves in a career which spans over 15 years – Derby twice paying in excess of a million pounds with Burnley also splashing out a seven-figure sum.

Yet at the end of June, the Stevenage-born centre-back is set to be a free agent.

“I can’t remember ever having a contract coming to an end – it could well be a first time,” said Shackell. “It is a bit different but something I want to embrace and enjoy.

“Hopefully something good comes out of being here. It has been a great first few weeks, I’m thoroughly enjoying it.

“You can only do what you can do. I’m happy with where my body is at – that’s the main thing. If I have any opportunities to be back involved I need to try and play well and see what comes out of it at the end of the season.”

Shackell underwent back surgery in March, with Derby boss Gary Rowett adding “he felt as if he was playing at 80 per cent and couldn’t sprint as well as he would like to”.

His return came in the EFL Cup as he played the full 90 minutes against Grimsby Town and former club Barnsley. His only other action before his switch to the Lions came in Premier League development fixtures.

Shackell only made one start for the Rams in the 2016-17 Championship season after September 10 – at Leeds on January 13.

“It was tough,” he said. “I came out of the team at the start of last year and then ended up having a back operation.

“I didn’t get back until nearer the end of August, by the time I’d got my fitness with the under-23s. I was chomping at the bit to go somewhere and get back involved. You do miss the buzz on a Saturday, it’s what you want to be doing.

“There was an incident [with his back] some time before and it just gradually got worse. You are putting yourself out there until the time came when I had to get it sorted. That is behind me now and I feel great.

“I think the longest I’d been out before was a few months with a groin injury when I was at Doncaster on loan. I’ve been fairly lucky with injuries so far, hopefully that continues.”

Shackell has played 382 times in the Championship alone, with total appearances weighing in at 474 matches. He has won promotion with Norwich, Wolves and Burnley as well as making the PFA Championship Team of the Year in 2013-14.

“As long as my body feels perfect I’ve got no intention of stopping – I want to play another couple of years,” he said. “I reassess each year.

“Being out of it for a while probably gives me added motivation, because I realise how much I miss it. I still want to win games. I want to play and I want to play well, simple as that.”

That determination to be back in the cut and thrust of a competitive match saw Shackell make his debut in the 2-2 FA Cup draw against Rochdale despite suffering from food poisoning.

“It was not ideal preparation,” he said. “I had my meal on Friday night but by midnight I was spending a bit of time on the toilet. I just felt a little weak – as you do when you’ve been in the bathroom all night and I didn’t have any good inside me.

“But I wanted to get out there even if it wasn’t the ideal performance or the ideal result.”

Shackell faces a challenge for game time with Shaun Hutchinson and Jake Cooper both in excellent form. Back-to-back clean sheets have been recorded in the Championship since his arrival.

“That’s what you want – it’s all about the squad doing well and pushing each other,” he said. “The boys played really well against Derby and were fantastic on Saturday, full deserving the win.

“You need to take your chance otherwise you won’t be playing at all.

“Both of the centre-backs are very good players. Coops is huge and gets on the end of a lot of set-plays as well. He’ll go from strength to strength – he’s left-footed as well and there is not an abundance of them.”

No-one inside the Millwall camp will say it, but Championship consolidation looks a formality after an impressive start to 2018.

“I’m not surprised with where the club is in the league table at the moment but until we get the points on board to be mathematically safe you’ve got to keep pushing,” said Shackell. “We just need to keep winning. I fully believe we will be more than comfortable at the end of the season.

“To come up from the league below it is tough. There are a lot of teams who do throw a lot of money at it. You’ve got top teams coming down and if they stay down then there are another three who then come down.

“This will be a very good achievement for Millwall and it gives a solid foundation to build on for next year.”