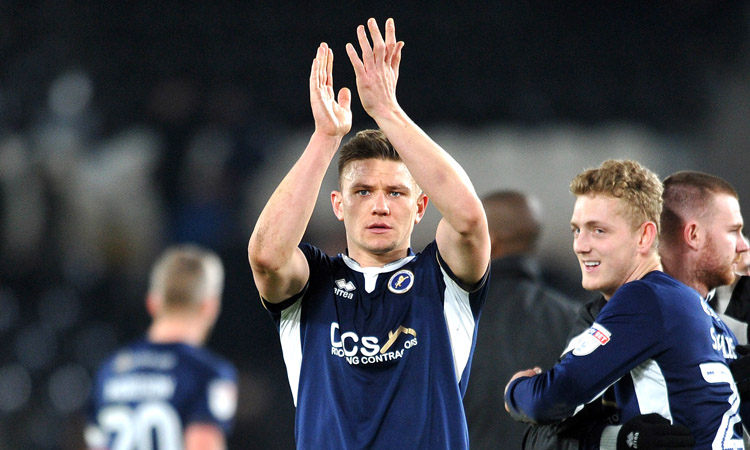 Championship sides might be sitting up and taking Millwall as a serious threat now – but Shaun Hutchinson never needed convincing that the South London club could be the real deal at this level.

Even back at the end of August, when the Lions were still adjusting to life in England’s second tier, the Geordie centre-back reckoned that just targeting staying up come May was selling himself and his team-mates short.

Hutchinson has proven to be correct. Jump to the present day and Millwall still have a shot at the play-offs with eight matches remaining of the campaign.

They are second in the form table for the last six games with 16 points collected – only a 1-1 draw at home to Sunderland spoiling their winning streak.

“After the first two or three games you get to see what the competition is like and I definitely felt that just aiming for survival wasn’t an option,” said Hutchinson. “If you do that at the start of the season then you are writing yourself off to fail.

“I knew we had the players to push on, and that’s what we have done.

“The run-in this time around is different. Last season everyone expected us to get the wins, we went into nearly every match as favourites and the opposition weren’t really coming out of their half as much.

“We have played with no fear and some teams have underestimated us and got a little shock when the game kicks off.”

The bookies still don’t fancy Neil Harris’ side to make it three play-off finishes in a row. They offer 11/1 on Millwall achieving the feat with Bristol City (2/1), Preston (11/4), Middlesbrough (2/3) and Derby (1/2) all shorter odds.

“All we can ask for is to give ourselves a chance with two or three games to go,” said Hutchinson. “If we have a little sniff of it then, we will be happy.

“We know how hard a task it will be. We hear the press writing us off and saying it is not possible – but we believe. We need to keep ticking each game off and trying to prove people wrong.

“Easter is important because we have two games in a short space of time. If we get beaten in those two then that would probably be it, because things turn around so fast.

“If you look at the fixture list then the Nottingham Forest match [today] is pretty much must-win. Ipswich [on Easter Monday] have dropped a little bit off form. It’s not often you say it, but we will be going there for three points and if we only get a draw we’d still be disappointed.”

Millwall battered Forest in their opening fixture of the 2017-18 campaign but lost 1-0 at the City Ground. The shooting and attacking statistics were hugely slewed in their favour but they headed back to South London pointless.

“I will take the opposite at The Den,” said Hutchinson. “I wouldn’t mind them having all the shots on target and us just getting the one that nicks the result, then they can have a taste of their own medicine. It is all about the points.”

So has the international break come at the wrong time for Millwall?

Hutchinson said: “It can work against you because when you keep winning – and feel unstoppable – you just want to keep playing Saturday–Tuesday Saturday–Tuesday and get them points on the board.

“Especially the way we play – very intense – we carry a lot of niggles and are fatiguing as the game goes on. So a little break is good for recharging the batteries ahead of the strong push we’re going to need to put in for the end of the season.”

Hutchinson has a perfect record in the Championship this season – playing every minute of their 38 matches.

His displays have landed him an improved and extended contract. His first season after arriving from Fulham saw him start just 13 times in the regulation League One campaign due to niggling injuries.

“I’d not really played a lot the year before at Fulham, something like 10 games, so my legs were kind of a bit unconditioned,” he said. “At Millwall I was straight back into it and it was a little bit of a shock to the system.

“This season I have worked a lot with the fitness coach Laurence Bloom doing a lot of general strength in the legs and core, trying to stabilise everything for the demands I put on my body. It seems to have worked so far.

“You can see the players are grafting for one another, I’m the sort who thrives off that.”

Hutchinson gets a second bite at his old club Fulham on April 20 after a hugely unlucky 1-0 defeat at Craven Cottage in November.

The Lions’ pressing game is set to be in full effect against the ball-playing west Londoners.

“If teams want to take the risk – it is called the beautiful game – then we are happy to try and nick it off them. We know they’ll have lots of possession but there are plenty of different ways of winning football games. I hope out style of play comes out on top.

“Fulham seem to have started to tick well and have brought in a striker [Aleksandar Mitrovic] who feels like the missing piece for them.”