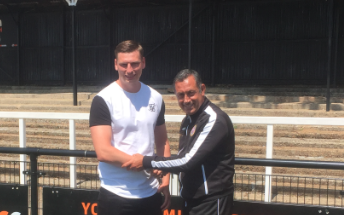 Jake Goodman is back in full-time football – and the former Millwall centre-back reckons that is the secret to realising his full potential.

The 24-year-old defender started on the Lions books but was released in 2015 and dropped out of the professional game.

But Goodman signed for National League Bromley this week and feels that will hugely improve his game.

“Since I left Wimbledon I have only been part-time and it has taken a long time, longer than I hoped, to get back into a full-time set-up,” he said. “Hopefully now I can push on, get that real sharpness you get from training more and progress as a player.

“Sometimes, before, you might get a manager telling you not to train Tuesday and they’ll see you on the Thursday – that’s a big gap from a Saturday game. You’re feeling sluggish because you’re sitting around the house all day.

“For me that is hard. I’m a big guy and I need to train and be on the move to be at my best.

“After I left Millwall I went down to National South with Margate, there was supposed to be this big dream of getting into the Football League within two seasons. But circumstances happened and I left and went to Braintree under Jamie Day, who I’ve known for most of my time in football.

“I wasn’t at my fittest because I didn’t do a pre-season and he needed me to play. It was a frustrating year because I kept getting injured – he probably brought me back too soon.

“Maidenhead was fantastic. It was what I needed at the time. I had a manager in Alan Devonshire who ran me constantly in the two days we trained – the most I had done since my pro days – and got me as fit as he possibly could. It proved to be the right call with how I played on a match day.”

Goodman never made a first-team appearance at Millwall.

“Being released has made me mentally stronger,” he said. “When things do get tough I know I can get through them. I’m not going to speak about what happened from Millwall to Margate. But it made me become a man very quickly through circumstances.”

Now comes a chance for Goodman to work again with Alan Dunne. The Lions fans’ favourite was player-coach at Bromley last season.

“He will always say his opinion – which any leader would,” explained Goodman.

“It was the same with Paul Robinson and Darren Ward. They’ve got 1,000 games under their belt between them and when they talk then you listen.

“You need people like that around you when things get testing.

“I’ve got to go to Bromley and impress. Unless you are Lionel Messi then a starting place is not guaranteed. You have got to work and earn it. That’s exactly what I intend to do.

“The aim is to get in the Football League. It’s what I want to do. Careers are only short and you need to get as high as you possibly can.

“I got a call off [Bromley] assistant manager Mark Hammond, he was my teacher when I was at Millwall when I was doing a BTEC course in sports. He said: ‘Do you fancy meeting for a coffee?’

“I went to the ground and met him, the manager [Neil Smith] and Dunney. We spoke about what they want, what I want and the ambition of the club. They made me feel a million dollars and I couldn’t wait to sign.”