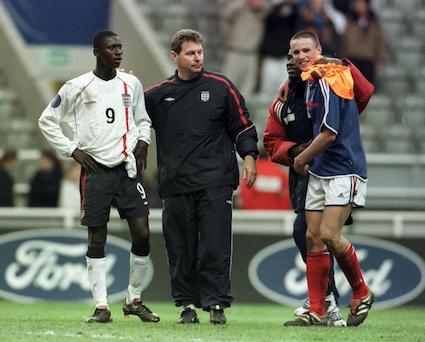 Cherno Samba did not do things by the book as a player – but he hopes putting his life down on paper will make sure other top young footballers do not make the same mistake.

The Peckham-raised youngster was the hottest of properties while on Millwall’s books – playing through the age groups for England and being marked out as a superstar of the future.

To put the battle for his signature into context, Liverpool boss Gerard Houllier got Michael Owen – Samba’s favourite player – to show him around their training ground complex in Melwood. Manchester United and Leeds, then a major force in the top flight, were also keen.

But a dream move to the Reds collapsed as the Lions could not agree a compensation package for the striker. Samba admits his career never recovered.

When it comes to the blame game though, he is the first to turn the focus on himself in his autobiography – Still in the Game.

No subject is off limits – whether that be lavish spending, taking an overdose while playing in Spain or pretending to be on international duty for Gambia because he hated a spell in Finland. There is also a passage where he talks about being fined two weeks’ wages for spitting in the face of a team-mate while on Plymouth’s books.

But Samba, who reckons his biggest blowout was splashing £11,000 on clothes while out in the USA negotiating a potential transfer, says that the book has helped him come to terms with missing out on that life-changing move to the Premier League.

“At the time it was all part of my journey – I had a chip on my shoulder,” he said. “I haven’t held anything back. A lot of ex footballers write all about the glory. Sometimes it’s good to say exactly what it was like, so people can learn what they should do.

“I was 15 when the Liverpool move came up. I didn’t know any better and what didn’t help was I was being labelled the best in Europe at that time. You can imagine what that would do to grown-up players now. It would go to their head, let alone at my age then.

“Millwall had a prized asset and they didn’t want to let me go. It’s like when you look after your best clothes or trainers. Unfortunately they couldn’t agree a fee. There is nothing wrong with that but at the time I didn’t understand.

“Fair play to Millwall, whatever happened they gave me a breakthrough to become a professional footballer. I’ve got nothing bad to say about them. They are my home club.

“But when it didn’t go through it broke my world. It crushed me. That’s when I thought I don’t want to play football. For six months I had fun with my friends.

“I decided after that I wanted to look after my myself financially and my family. That was my motivation after that. I lost my appetite for the game right there and then.

“It really damaged me and affected the rest of my career. I kept thinking about it. Now the book has come out it has allowed me to let that go.”

Samba grew up on the Sceaux Estate in Camberwell. He admits that football led him away from the gang culture. Charlton and West Ham were also interested in him after he scored 132 goals in 32 matches for St Joseph’s Academy in Blackheath.

Samba makes a pertinent point in his book about Tony Craig. The defender, who came through the Lions youth scheme and captained the club, has played over 500 career games.

Samba played just 23 times in English football – 19 of those for Plymouth before a loan to Wrexham.

“I wish I’d been one of those kids to walk through the back door and not the front, who everyone took notice of.

“Tony worked hard and is a prime example that there are no shortcuts in football. If you put the hours in then you get the reward – Tony did that. Some players who have the best ability don’t want to work hard – that was the case with me.

“If there was a running drill I’d do four or five bits out of the 10. If there was shooting practice after training then instead of being there for an hour then I’d probably do it for 10 minutes. The team would go to the gym and I’d walk off.”

Samba also became something of a cult figure due to his stats in Football Manager – a computer simulation game.

He was a youngster who everyone signed because he did become a superstar. It is a subject matter which he has been quizzed on more than once.

“Before I talk about Football Manager, I’m very proud of what I achieved,” he said. “People seem to forget I played in the Championship, which is one of the hardest leagues in the world.

“I played for England from U15 to U20 level, I got 64 caps and scored 36 goals. I haven’t had a bad career. A lot of people would wish to have that career.

“When Football Manager came out it was something I embraced.

“It didn’t help, at the same time, because it put certain pressure on myself. The stats were saying this [high numbers] so I felt I had to produce that on a football pitch all the time.

“When I am 91 years old there will still be people who come up and talk to me about Football Manager. I can’t change that.”

But Samba’s story is not over yet.

He is doing his coaching badges with the intention to start working at academy level.

“My advice is that you have got to work hard – it is what let me down.

“You need to stay away from the pitfalls. In life there are no shortcuts, nothing is for free.

“I’ve lived the dream. I want to get into coaching and help emerging talent. You have to stay steady and be humble. It will make them a better person.

“My ultimate goal is to manage the Gambian national team. My parents are from Gambia and we have never qualified for an Africa Cup of Nations or World Cup.

“But I want to do things differently to when I was playing – get my head down, smell the grass and gain experience.”

Still In The Game is available to buy now. To get your copy go to www.chernosamba.co.uk. It is also available on Amazon.