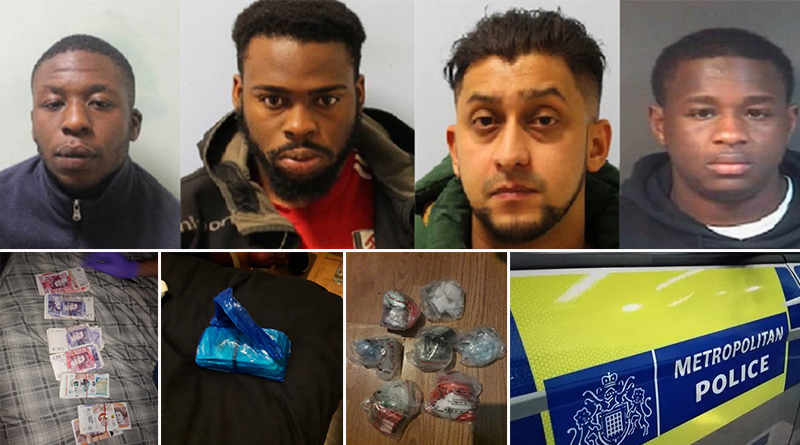 Four men have been jailed for a total of over ten years after pleading guilty to dealing drugs across London.

Michael Fahm, 25, of Comber Grove was jailed for 45 months and Shakeel Dan-Othman, 22, of Beaconsfield Road was sentenced to 24 months in prison after both pleaded guilty to supplying Class A drugs and Class B drugs, as well as possession of criminal property.

The court heard how on March 6 officers out on patrol in Comber Grove, Camberwell stopped a car and Fahm, the driver, was searched by officers at the scene.

Fahm admitted to being in possession of £800 in cash before making a run for it down an alleyway but was cvaught and a bundle of cash found in his possession.

Class A drugs were found in his waistband and he was arrested on suspicion of possession with intent to supply Class A drugs, obstructing a police officer and money laundering.

A further search of Fahm in custody identified six wraps of cannabis hidden in his underwear and £1,250 in cash.

On June 20 officers were in Comber Grove preparing to execute a search warrant at a residential address which found £5,820 in cash and substantial amount of drugs including cocaine, ketamine and MDMA.

Whilst waiting for further officers to attend and assist with the search, a dark grey BMW was seen to leave the area.

It was established the vehicle was registered and insured by Fahm. The vehicle stopped further along Comber Grove and Fahm was inside.

Officers seized a white iPhone from his possession and subsequent analysis identified several WhatsApp messages relating to the supply of drugs.

From these messages, Ali, Lawson and Dan-Othman were connected to the conspiracy to supply drugs across London.

Search warrants were carried out at Ali, Lawson and Dan-Othman’s addresses and Dan-Othman and Lawson were also arrested on suspicion of a conspiracy to supply Class A drugs.

There was a substantial amount of drugs found at Dan-Othman’s address including Class A and B drugs and £6130 cash. A further £430 was also seized from Lawson’s address.

The total street value of drugs seized was approximately £15,000.

DC Raymond Sekalongo, of the Violent Crime Taskforce, who led the investigation, said: “We have been clear that drug dealing is linked to the high proportion of violence we have seen in London.

“Thanks to the work of the Violent Crime Taskforce, this investigation exposed all four men’s involvement in a London drug supply conspiracy and they will now serve time behind bars.

“The weight of evidence against these four individuals meant they had little option but to plead guilty.

“I hope these sentences act as a deterrent to those involved in this type of criminality.”