Viktor Gyokeres had put the Sky Blues into a ninth-minute lead at The Den.

But Saville was cued up by Jed Wallace and his shot took a slight deflection on its way past Coventry keeper Simon Moore.

Here are Richard Cawley’s four takeaways from the match.

Saturday’s match was entertaining and open – both teams intent on trying to get the victory. But Millwall have drawn their last three Championship matches and that has been the outcome in five of their opening eight league fixtures. The xG [Expected Goals] 0.87-1.04 showed that Coventry had marginally the better chances, although the big talking point was referee Keith Stroud’s decision to disallow Tom Bradshaw’s first-half effort. After back-to-back away matches at West Brom and Swansea – the latter an unhelpful Wednesday night kick off that left little recovery time – a point is no bad return.

JEERS FOR THE OFFICIALS

Millwall fans made sure that the match officials knew all about their displeasure as they came off the pitch, both at half-time and full-time.
It was the assistant referee who flagged for offside after Bradshaw had guided Scott Malone’s cross past Simon Moore. Replays showed that Matt Smith was penalised.
It would have put Millwall 2-1 up – the South Londoners have not beaten the Sky Blues at The Den since November 2011. Stroud’s call ensured the wait continues. Even Coventry manager Mark Robins admitted it looked “a good goal”. Rowett, who followed him in addressing the assembled press, said video footage showed both Bradshaw and Smith were onside. 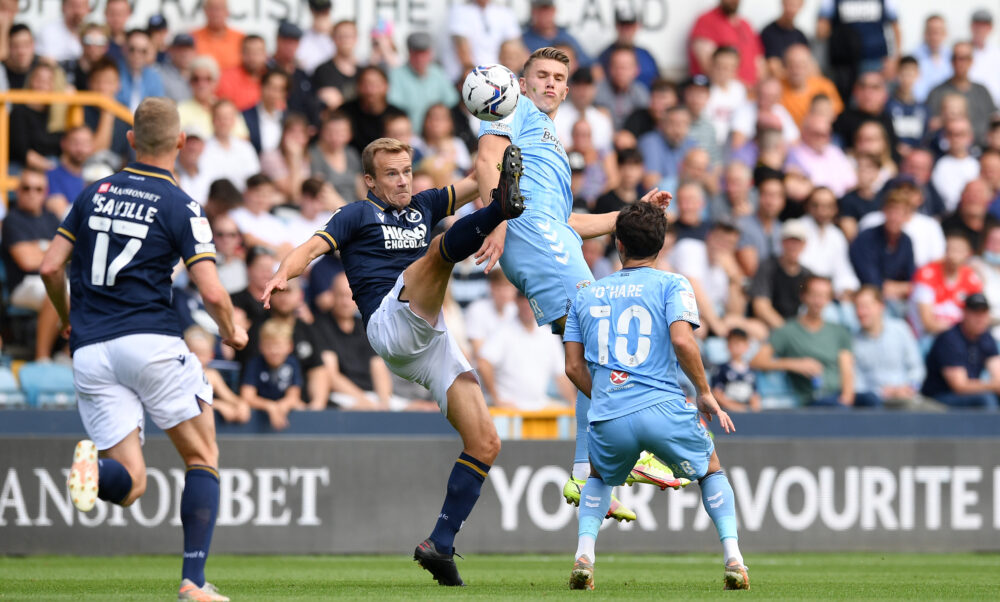 Rowett made two changes to his starting line-up, and one of those was to bring in Matt Smith for Mason Bennett. It saw a switch of formation to 3-4-3 with Jed Wallace and Tom Bradshaw deployed either side of Smith. Bradshaw, just as he did at Swansea, covered plenty of ground and dropped deeper to pick up the ball or close down. He nearly had a good shooting chance early on but he took one touch too many and that allowed Kyle McFadzean to make a sliding challenge. There were another two set-up changes by Millwall as they went to 3-5-2 after Billy Mitchell replaced Smith, before looking like more of a 4-4-2 once Connor Mahoney and Mason Bennett came on for Bradshaw and Maikel Kieftenbeld. But the only chance created in the second period came in the 58th minute, Moore turning Bradshaw’s header around his left post.

WALLACE WITH ANOTHER ASSIST

Jed Wallace doesn’t pay too much attention to assists but he now has three for the season, along with three goals. And you could see he was cramping up a touch towards the end after winning a corner. Last time in SE16 he provided a moment of inspiration with his long-distance free-kick to level things up against Blackpool – rightly nominated as a Goal of the Month contender for August. This was a rare afternoon where he didn’t get a shooting chance of his own.

George Saville managed double figures in his last campaign in a Millwall shirt – earning that big money move to Middlesbrough. And yesterday he made the sort of run into the penalty box that was so effective and productive when he was in his pomp under Neil Harris. His last Championship goal before Saturday for the Lions at The Den was in a 1-0 victory over Brentford in March 2018.