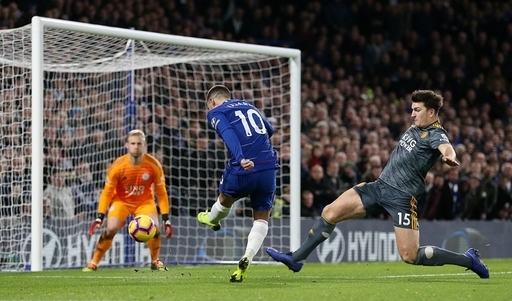 Chelsea succumbed to their first home league defeat of the season as Leicester’s City’s smash and grab approach secured all three points thanks to a Jamie Vardy classic strike.

The Blues now have Arsenal breathing down their necks with only goal difference between the two sides, and could drop out of the top four as they face two tricky away matches at Watford and Crystal Palace in the festive period.

The Blues were terrible in the second half, while the visitors stuck to their deep defending and lightening quick counter-attacking.

Chelsea simply could not get past the the Foxes back four enough times, and on the rare occasion they did, the woodwork came to their rescue – Eden Hazard rattled the crossbar whle and last-minute Marcos Alonso effort saw a low effort bounce off the foot of the post and zip across the goal-line before going out to safety.

Both sides started off confidently, but Kasper Schmeichel missed a long ball from David Luiz and Willian almost sneaked in, but failed to get the necessary  touch to prod the ball goal-bound.

With the visitors set up to counter-attack, that almost reaped dividends on 10 minutes when ben Chigwell cut through the Chelsea defence. David Luiz was the quickest to react and cleared the ball away.

Luiz was inches away from getting onto a flicked header from a Willian corner but the centre-back was just a half second away from nodding into the net at the far post on 17 minutes.

Cesar Azpilicueta thrashed the ball high over Schmeichel’s crossbar on 27 minutes as the Blues struggled to find a passing path through the packed Foxes’ defence.

On the one occasion they did Eden Hazard found himself inside the penalty area but he rattled the crossbar with a fierce right-footer on 33 minutes.

Five minutes before the break Kepa produced the save of the season, denying a venomous long-range effort by Wilfred Ndidi, by finger-tipping the ball over his crossbar.

Jorginho tried a similar effort on 45 minutes. The ball wasn’t struck  struck quite as firmly and Schmeichel simply punched it clear.

Within minutes of the restart, Chelsea were undone by a wonderful piece of counter-attacking when James Maddison, slotted the perfect pass to in-running Jamie Vardy, who needed no second chance to smash a fierce right-footer past  Kepa.

Willian tried an angled shot a two I minute after the goal, on 53 minutes and Schmeichel needed a second touch to fully grab the ball into his body.

Hazard forced Schmeichel into a find stop with a powerful angled shot  on 58 minutes as Chelsea attempted to rectify the deficit.

he was quickly followed by Cesc Fabregas for the ineffectual Jorginho with 15 min utes left on the clock.

Rudiger had a great chance with two minutes left, but his close-range glancing header went wide.

Alonso then raced clear and saw a low left-footer beat Schmeichel but then bounce off the post and roll across the goal line and cleared.

Next up for Chelsea is a Boxing Day trip to Vicarage Road to face Watford, kick-off 7.30pm.