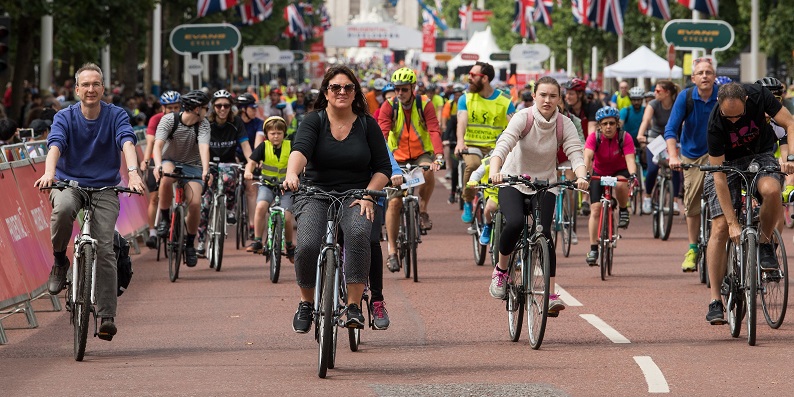 Prudential RideLondon, the world’s greatest festival of cycling, is expected to attract more than 100,000 cyclists tomorrow and Sunday, the fifth edition of the festival.

It combines the fun and accessible element of a free family ride in central London with the excitement of watching the world’s best professional cyclists race.

Taking a cue from the London Marathon, amateur cyclists also participate by riding a 100-mile, 46-mile or 19-mile challenge on the same closed roads as the professional men, with the added incentive of raising money for good causes.

The best action is broadcast live on TV both on BBC TV in the UK and internationally.

Prudential RideLondon FreeCycle, on Saturday, offers the chance for all the family to enjoy an eight-mile traffic-free circuit on closed roads through central London, passing some of the capital’s most iconic landmarks.

Everyone is welcome, no matter what their age or ability. Cyclists will be able to cycle the route at a leisurely pace and as many times as they like with the ability to stop off en route at seven different festival zones where there will be a range of bicycle-based entertainment and activities to enjoy.

Prudential RideLondon Classique, also on Saturday, will take place on a spectacular 5.5km circuit in central London, beginning and finishing in The Mall.

This is a UCI WorldTour race for a third successive year.

The prize money for the Prudential RideLondon Classique is the highest ever offered for a women’s one-day race and the same as the prize money on offer in the men’s race the following day.

Prudential RideLondon-Surrey 100, on Sunday, will see 25,000 amateur cyclists take on a cycling challenge like no other through London and Surrey on a similar route to that of the London 2012 Olympic road cycling races.

The Prudential RideLondon-Surrey 100 will start at the Queen Elizabeth Olympic Park, then travel through the capital and on to Surrey’s stunning country roads and through the Surrey Hills before a spectacular finish in The Mall in central London.

As well as an opportunity to take on a personal challenge in completing the ride, participants’ involvement will benefit good causes, with thousands riding for charity.

A record-breaking £12 million+ was raised for charity in 2016, bringing the total raised by riders since 2013 to more than £41 million.

Returning for a second year is The Amstel Ride Together, where teams of four can ride the full 100-mile distance together.

There’s also a Peloton Relay for teams of four, where one rider starts the event, rider two joins after 26 miles, rider three joins after 48 miles, rider four joins after 75 miles and the full team of four rides the last 25 miles together to finish in The Mall.

Prudential RideLondon-Surrey 46, this year taking place on Sunday, was held for the first time in 2016 and was created specifically as the ideal first mass participation sportive for newer cyclists and also younger cyclists.

It comprises a spectacular 46-mile route on traffic-free roads, beginning at Queen Elizabeth Olympic Park in east London and following the same route as the Prudential RideLondon-Surrey 100 for the first 27 miles before taking a new two-mile route which then links up with the last 17 miles through London to finish on The Mall.

BBC Sport and British Eurosport will be showing live coverage.