Walworth might have been mentioned in the Domesday Book and been an inspiration for Charles Dickens’ Great Expectations and painter Samuel Palmer. It might also have been the headquarters of the Labour Party from 1981 to 1997, but it is only now recovering from decades as a deprived area. FRANK PACHAS tells some of its history and reports on a grant to improve its image.

Walworth was a long rural area producing a lot of fruit and vegetables in the 17th century, but as Victorian London expanded, it became a bustling area and the cultural hub of South-east London.

It also gave birth to the club which created one of the world’s most important sporting stadia.

The Montpelier Cricket Club leased a cabbage patch and market garden in Kennington from the Duchy of Cornwall in 1845, took turf from Tooting Common and turned it into The Oval, one of the most famous cricket venues in the world and created the Surrey County Cricket Club.

Walworth also used to house the Royal Surrey Gardens, a large public entertainment hub with a zoo that rivalled the newly-opened zoo at Regent’s Park.

Today, it’s Pasley Park – and much smaller than it originally was.

But from 1831 to 1856, the Royal Surrey Gardens were the perfect destination to see a menagerie including lions, tigers, rhinos, bears, giraffes and even llamas. 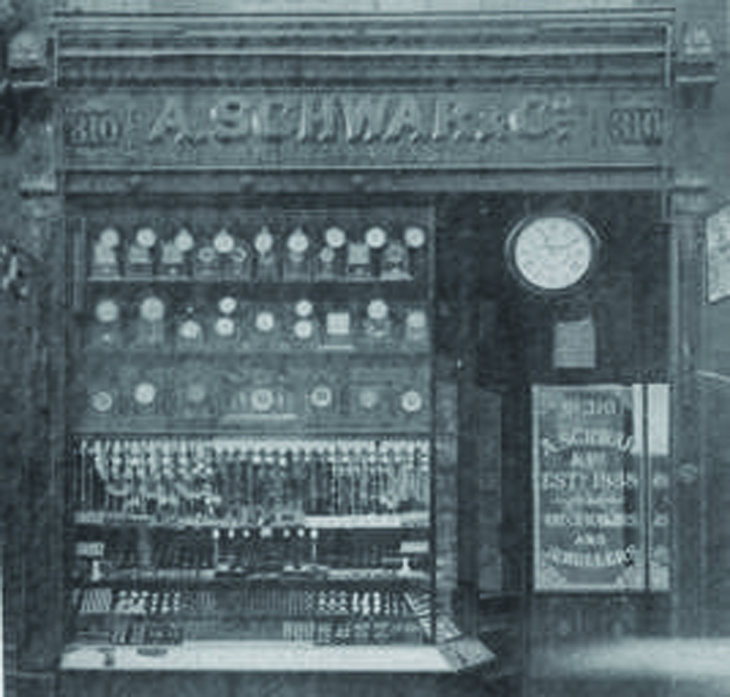 After suffering intense competition from the Great Exhibition at the Crystal Palace in 1851, the zoo was sold off and the Surrey Music Hall was built in its place.

Like Crystal Palace, this theatre was largely built from cast iron over three floors, becoming the largest venue in London with a capacity of 12,000 spectators – until it was destroyed by fire in 1861.

One building dominating the view from the intersection of Walworth Road and Liverpool Grove is St Peter’s church, built as a result of Walworth’s growing population by Sir John Soane in 1825.

Walworth, while still belonging to Kent until 1900, when the district became part of Southwark, was home to notable tradesmen with businesses in Walworth Road.

They made the one-mile high street into a thriving microcosm of Walworth, whose population had increased eightfold, reaching 122,000 inhabitants by 1901.

One of those migrants was Adelbert Schwar, a clock and watchmaker from Baden, Germany who founded Schwar & Co at 250 Walworth Road in 1838. The jewellery shop still has its Victorian façade, 183 years later, buying and selling mainly gold and diamond pieces.

During those years, Walworth remained a rural area with easy access to the city through Borough and London Bridge.

Walworth was also the birthplace of pioneers in other disciplines. Painter Samuel Palmer, a key figure in Romantic painting in Britain, was born in Surrey Square off the Old Kent Road in Newington in 1805.

Inventor Charles Babbage and poet Robert Browning were also born in Walworth in 1791 and 1812 respectively.

Babbage, likely to have been born at 44 Crosby Road (now Larcom Street), invented the first mechanical calculator, which he called his Difference Engine in 1822.

Robert and his later wife the poet Elizabeth Barrett were trailblazing writers, both liberals and supported the emancipation of women and the abolition of slavery.

Although Mary Wollstonecraft, one of the intellectual founders of feminism, was born in Spitalfields in 1759, she also lived on and off in Walworth.

Walworth started to deteriorate quickly after the mid-19th century, but important and promising figures still emerged from it.

Although there is no official record of his birth, Charles Chaplin is believed to have been born in 1889 at East Street.

The area is also the place where Nigerian born Otegha Uwagba, a bestselling author, grew up. For her, Walworth still feels like a quiet and familiar area where a less troubled community has grown in recent years.