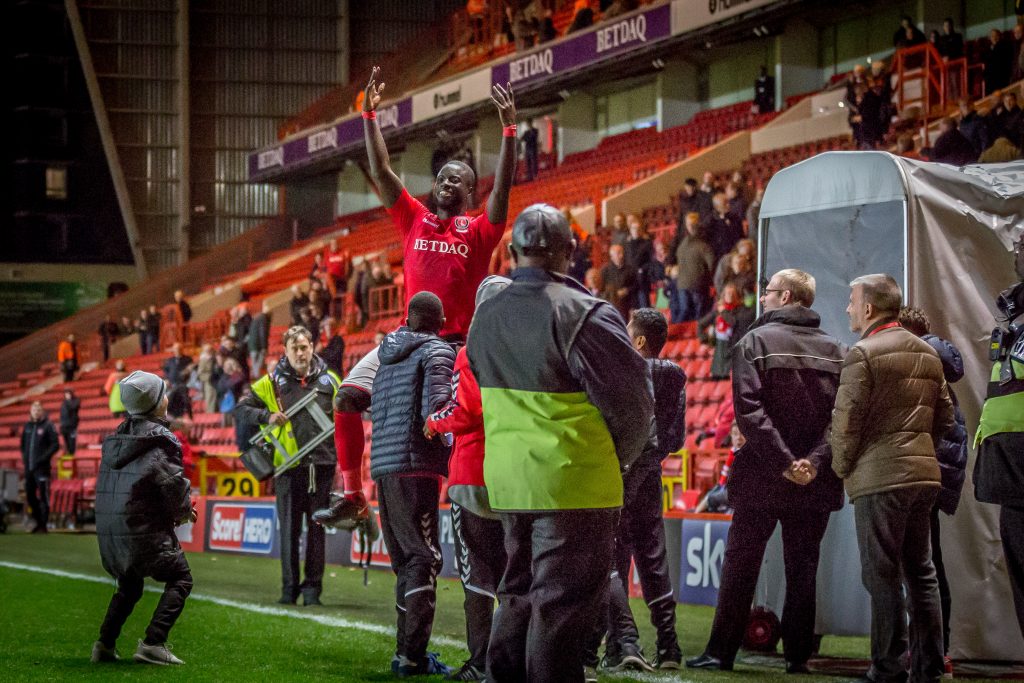 Naby Sarr has spoken of his determination to turn around his Charlton Athletic career – and insists he never eyed a summer exit.

The 24-year-old was the Addicks’ most expensive outlay of the 2015-16 season from Portuguese side Sporting CP but suffered a torrid start to life in the English game.

Sarr made just nine starts in the Championship and failed to play a single minute after the start of January as Jose Riga was appointed.

The Addicks’ relegation to League One saw the Marseille-born centre-back loaned to Paris-based Red Star FC in the previous campaign.

Sarr’s stock in SE7 was at a low when he left. But he has been brought back into the fold under Karl Robinson, with his performances making him something of a cult hero to many Charlton fans.

Tuesday’s 2-1 win over Rochdale was his 11th appearance in all competitions for the Addicks this season. And his ball-playing tendencies have not been shackled by Robinson.

“I had to adapt to this new league. I was in Portugal and before that I was in France – the rhythm is totally different. “It’s another kind of football. I had to take this year to adapt, to learn. Even if it went bad, I learned a lot. It was also beneficial. My year at Red Star gave me a lot of games too, so when I came back here I knew better my subject.

“I came from Portugal. In Portugal they never kick long. I wanted always to play – and that was the problem. In the Championship, if you’re always trying to play, sometimes the striker takes the ball and afterwards they score.

“You could see on Tuesday, that sometimes now I play and sometimes I just go forward. You have to adapt to the situation. Before I wanted to always play, play, play. Now, I know when to make the right choice.

“My desire is to stay in England. I love this Championship. I went on loan to France, to Paris. I left my parents three or four years ago – it was good for me to get closer to them for one year.

“After that I came back here and started stronger, to prove that I can play in this team and I’ve changed from two years ago.”

Sarr holds no resentment over the criticism he received. At one stage he was held up as a perfect example of the botched overseas signing strategy employed by the Addicks under Roland Duchatelet.

Slowly but surely he is changing that assessment.

When asked if he was judged too soon, Sarr replied: “No, I don’t think so. We got relegated – so they [the fans] were right to shout and scream. They want the same result as the players – it was normal.

“Every football player doesn’t like to play badly – yes, that was tough. We also had the relegation. In this tough period you have to take the good, to learn from it and go ahead.

“I didn’t expect that. The most important thing is on the field. When you do well on the field, everybody can see it.”

Israeli Guy Luzon was jettisoned in October 2015 and replacement Karel Fraeye lasted just 14 matches before his dismissal in January with Riga returning and failing to secure survival in the second tier of English football.

Robinson celebrated a year in charge of Charlton yesterday – a period of solidity when judged upon Duchatelet’s volatile changes of management.

Sarr said: “When you have three different managers in one year – one manager wants to play like this, the other one plays like that and one wants to bring in some other players. It changes all year – you can’t have some stability. With Karl as the manager we have that stability that we missed a few years ago. It’s good for everybody.

“Most importantly, he has the confidence in me so I can play free.”

Robinson has even talked about Sarr being a back-up option to Josh Magennis in attack – with Charlton light on physical presences if the Northern Ireland international is not available.

“I have no problem to play up-front, left-back, midfield, centre-back,” said Sarr. “Where the gaffer needs me, I will play and give my best.”

Charlton were far from at their best against Dale but Jake Forster-Caskey’s brace earned them maximum points. They are sitting pretty in the table – fourth with a game in hand of Wigan and Shrewsbury, who occupy the automatic promotion slots.

“Even if we concede we keep going and we know we’re going to score.

“Our team gives us options to play. We have [Ahmed] Kashi and Jake in the midfield. We have Ezri (Konsa] who wants to play like me. We have Ricky and Reevesy. “Everybody wants the ball – nobody is hiding. Whatever the team we’re playing, we can play our football.

“We don’t have to worry about the other team.”

Sarr’s starting spot will come under threat now Patrick Bauer is back from a groin strain, which saw him miss the 2-2 weekend draw with Milton Keynes.

Jason Pearce – a rock in the middle of the backline – is closing in on a return from a knee injury.

“There’s lots of competition – but it’s healthy competition,” said Sarr. “It pushes everybody to work harder and to think in our mind that nobody’s place is safe for the whole year. “Every game you have to prove, to prove, to prove. Even if you’re on the bench the next game, the game after that you have to prove again. Everybody stays at a high level.

“The objective is to get promoted because I think Charlton doesn’t serve to play in League One. I think it is at least a Championship club.”