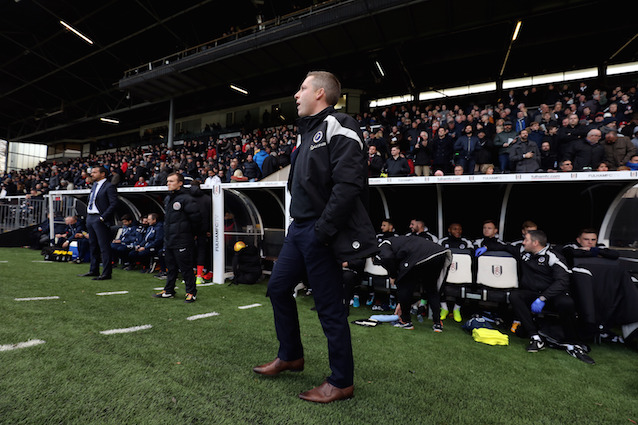 The Lions hit the woodwork twice and their direct style of play had the west London hosts in all sorts of problems.

It is now 10 games away from home without a win for Millwall but they had chances to leave Craven Cottage with at least a point.

Harris made two changes to his starting line-up from Tuesday’s stalemate with Hull City.

Lee Gregory – who missed a late chance to nab a winner at The Den – dropped to the bench along with Aiden O’Brien.

Harris preferred the pace of Fred Onyedinma out wide and opted to go with two targetmen in Steve Morison and Tom Elliott.

The Lions’ height advantage was a glaring one with the home side hardly blessed with tall defenders.

Elliott went so close to a fifth goal of the season after six minutes but his header from a Conor McLaughlin cross came off the far post – Fulham keeper David Button may have got a vital touch.

Jordan Archer clawed away a Sheyi Ojo effort that was heading for the top right corner of the net before Shane Ferguson hammered a low strike across the face of goal as the hosts lost the ball looking to pass out from a goal-kick.

McLaughlin made an excellently-timed block to deny Kebano on 32 minutes. Tom Cairney’s pass unpicked the Lions backline but the Northern Ireland international got enough of a touch to only concede a corner as he deflected the shot.

Elliott threatened again on 43 minutes. Ferguson supplied the cross and it looked like the big targetman got totally the wrong angle on his header.

Fulham opened the scoring just before half-time. Stefan Johansen produced a flick over the Millwall backline and Archer needed to come off his line to frustrate Kebano. But from the resulting corner, Rui Fonte went down and McLaughlin was booked. Norwood drove home the penalty in virtually the last action of the half.

Chances in the second half did not flow. Cairney’s shot was straight at Archer while George Saville released Morison on the right of the box but his floated striker cleared Button but was wide of the target.

Millwall struck the woodwork for the second time on 77 minutes. Saville produced a delicious curled strike which came back off the left post with Button hopelessly beaten.

The Lions did not make the most of their set-pieces and Saville curled comfortably over after a free-kick was awarded just outside the penalty area for a foul on Elliott.