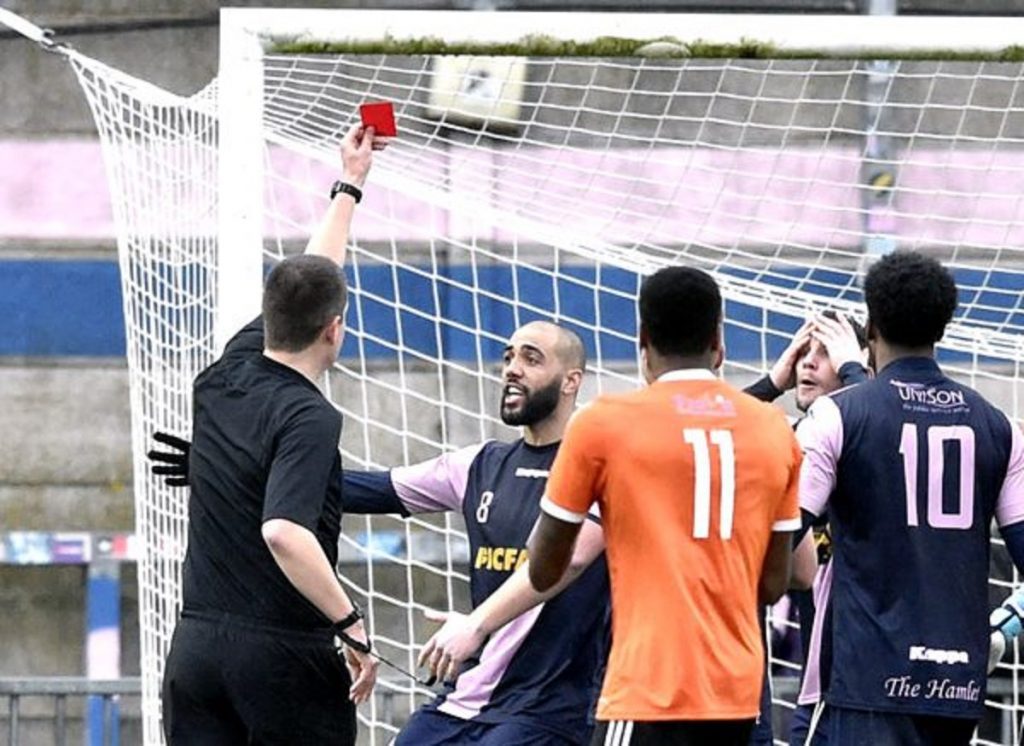 By Anthony Scales at Champion Hill

Nailed-on certainties to secure at least a Bostik League Premier Division play-off finish a month ago, Dulwich Hamlet saw their top-five-chasing rivals again gain ground on them at the weekend, as the Champion Hill side were held to a frustrating goalless draw by Met Police.

But after taking just Saturday’s solitary point from their last four league matches, Dulwich manager Gavin Rose bridled at criticism of his side, who missed enough chances in the opening quarter of the game to have buried the Met.

“We’re second in the league, that’s the facts. I prefer to look at the facts, we had done really well beforehand,” said Rose, when asked about his side’s worst run of the season. “There was a decent gap [between Hamlet and the third-placed team]. It’s a long season and where we are at the end of the season is what we need to focus on.

“So far, as a group, I think we’ve done quite well. Yes, our recent form hasn’t been great but it would be very silly of me to be clouded about what we’ve done as a team throughout the season, we’ve been very good. It’s a competitive league, it isn’t a league where we ‘should’ be second. We’ve got some good competitors, so let’s remember that and show respect to those that we’re playing against because every team in our league doesn’t know if they’re going to win games – it’s not that easy in this league.

“I’m not too carried away with our recent run because we’ve done well as a team and if we lose that perspective then it can be a bit gloomy. We’ve dropped 11 points from 12 and we’re still second – that says a lot about the boys.”

Dulwich could have been out of sight by the time left-back Nathan Green’s pacy cross rolled inches in front of a lunging Kenny Beaney midway through the first half on Saturday. But the game became stodgy after that and the hosts ended up indebted to goalkeeper Preston Edwards, who saved a second penalty of  the season from Met striker Lloyd Macklin after Beaney was sent off in the 51st minute for using his arm on the line to prevent a goal.

Met keeper Luke Williams was in inspired form at the other end early on, getting the faintest of touches to tip over an Ashley Carew free-kick in the 13th minute after a cynical foul by Jeremy Arthur on Reise Allassani – a challenge which drew the first of the game’s three yellow cards for fouls on the former Crystal Palace prodigy.

The Blues’ Luke Robertson chested the ball off the line from the corner that came as a result of Williams’ save and the keeper somehow denied Allassani from point-blank range in the 16th minute, after Sanchez Ming had wriggled to the byline on the right and sent in an inviting cross.

Nyren Clunis also went close as the Met were pinned back in the opening period but it was the visitors who came closest to taking the lead after a piece of criminal defending from Dulwich four minutes into first-half injury time, Williams almost claiming an assist as his mammoth goal-kick was allowed to bounce into the Hamlet area where Bayley Mummery thrashed it against the underside of the bar with Edwards a spectator.

The pivotal moment came six minutes after the break, when Dulwich failed to deal with a corner from the right and a shot from Olli Robinson was kept out by Beaney’s arm. Referee Graeme Ions pointed to the spot before reaching for the red card but midfielder Beaney’s sacrifice paid off as Edwards, who had stopped a Macklin penalty in the reverse fixture, hurled himself to his left to claw away the forward’s spot-kick.

The game opened up as Rose refused to withdraw either of his strikers and Williams again worked wonders to tip over an Allassani effort after a delightful reverse pass from Nathan Ferguson in the 66th minute.

Rose was left bemoaning his side’s ability to finish their chances and Dulwich’s profligacy could have been even more costly, with Met sub Jo Nurse firing just wide five minutes from time.

“Again, not taking chances,” said Rose afterwards. “We had a decent amount of chances in the first half and obviously, when you don’t score goals it gives teams a chance to regroup, and they did that well.”

Despite having Nana Boakye-Yiadom on the bench, Rose said his team’s failings in front of goal could prompt him to return to the transfer market.