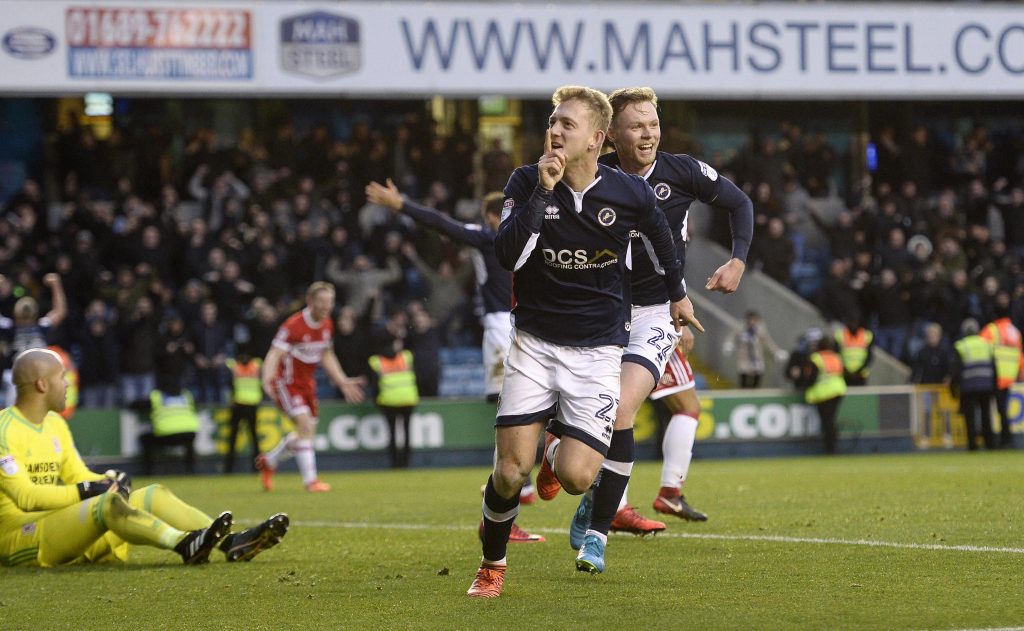 George Saville has promised to revise his goal target upwards after finding the net seven times in just under half of the Championship season, writes Ben Kosky.

The midfielder took his tally to seven by grabbing Millwall’s second goal in their 2-1 win over Middlesbrough last weekend, more than he has ever previously netted in a full campaign.

Now Saville is aiming higher – and he has no doubt that his unbroken run of league games in the Lions team is the main reason behind that increased scoring rate.

He said: “I’ve always wanted to add goals to my game and obviously that comes from the rhythm of playing games regularly and consistently.

“The gaffer’s given me that opportunity and given me licence to get in the box and I’m doing everything I can to repay him.

“When I was at Wolves I never had that consistency of playing games.

“I had one period where I played half the season and scored five in about 20 games, so I know it’s in there.

“I think the harder you work, the luckier you get – and last Saturday proved that again. It was maybe a bit scrappy but a goal’s a goal and nobody says anything at the end of the season about how they went in.

“At the start of the season you always set yourself individual goals and, for me, one of those was to score more often.

“Scoring seven times at this stage is great, but now I’m going to have to rethink the plan, try and chip in with a few more and see where that takes me.”

Saville may have surprised himself with his scoring run since he returned to the Den on a permanent basis from Wolves at the start of the season.

But he is quick to give credit his team-mates – particularly midfield colleague Ryan Tunnicliffe, with the pair forging a strong understanding since Shaun Williams’ injury at the end of September.

“Tunny stepped in and he’s done a great job, mirroring what Willo did at the start of the season,” said Saville.

“It maybe took him one or two games to understand the role but he’s been fantastic in the last few and we’ve started to build a good relationship.

“Everyone’s been pulling their weight, the boys have done well in creating opportunities and to be honest I think we should have more goals as a team than we’ve got.”

Saville also feels that the Lions’ performance and win against Middlesbrough proves they have nothing to fear when facing the Championship’s more fancied teams.

That includes league leaders Wolves – the next visitors to the Den on Boxing Day – although the 24-year-old expects his former club to be crowned as champions at the end of the season.

“No doubt about it, they’re the best side in the division,” added Saville. “I’ve said that since we played them earlier in the season.

“I don’t think there are many other sides that have really got the better of us.

“It’d be great for them to get promoted – they’re a fantastic club and obviously I’ve still got friends there.

“But hopefully we can beat them at the Den.

“The Middlesbrough game was massive for us, mentally more than anything – with the depth of their squad and the subs they were making, to beat them was a big statement.

“To beat a club like Middlesbrough gives us confidence going into any game.

“There’s no reason why we can’t finish in mid-table and we should be there now, to be honest.”