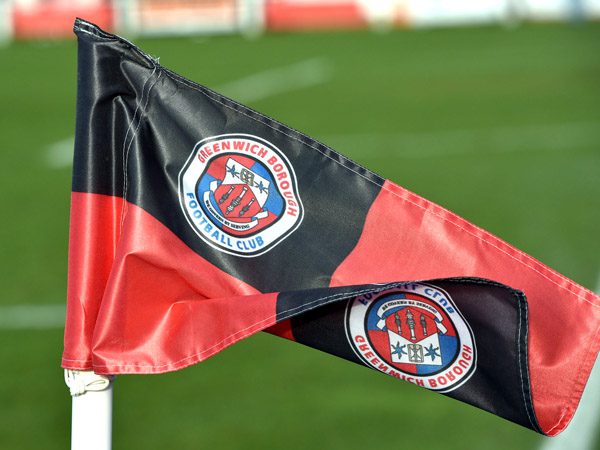 Sport
6 February 20185 February 2018 Richard Cawley 0 Comments
By Richard Cawley
richard@slpmedia.co.uk
Greenwich Borough are just two points off second-placed Cray Wanderers and have a game in hand after a 2-0 win at Horsham on Saturday in the Bostik League South Division.
Chinedu McKenzie and a Jack Barham penalty extended their unbeaten run to 13 matches.
Borough were forced into a number changes with Jack Tucker picking up a knock with Gillingham on Friday, Travis Gregory unavailable due to a virus and Danny Fitzsimons still recovering from a knock in the previous game.
Boss Paul Barnes gave a debut to new signing Nassim Dukali and shuffled the pack – going with a back line of Kaka Dembele, Nathan Paul, Calum McGeehan and Tom Carlse in front of Michael McEntegart in goal.
Horsham came out of the blocks fast, forcing mistakes, but they did not really test McEntegart.
Greenwich slowly started to play themselves into the game and through Dukali looked the biggest threat to create opportunities. With the help of Carlse and Ali Fuseini he set up McKenzie, who should have converted a great chance.
Dukali should have got his name on the scoresheet before the break.
The second half saw a completely different Greenwich Borough with Fuseini, Bradley Pritchard and Sam Corne dictating play from midfield. That allowed Carlse and Dembele to impose themselves on the game from an attacking perspective and finally get Barham, Dukali and McKenzie looking like a threat in every attack.
Dukali released Barham down the left, he centred for the onrushing McKenzie to convert in the 49th minute and continue his brilliant goalscoring form since joining.
It wasn’t long before it 2-0 with the impressive Dukali slipping the livewire Barham away, he beat his man to the ball and was cynically taken down. He stepped up to coolly put away the resulting penalty.
Horsham had the best chances towards the end with McEntegart brilliant again, making it two clean sheets it two games.
Nathan Paul stepped into the centre-back role and looking assured in a man-of-the-match performance.
Greenwich boss Barnes said: “We weren’t at it first half, at half-time we spoke about the need to raise the tempo and break lines quicker with the ball.
“The lads were superb in carrying out the instructions in the second half, and the lads at the back were solid, the clean sheet makes it three in a row and shows that we are getting it right at both ends of the pitch.”
Mid-table Thamesmead Town drew 0-0 at home to Lewes.
VCD Athletic took an 85th-minute lead through Aymun El-Moyhalbel but Hastings found a 90th-minute leveller thanks to Ollie Rowe as the clash at Oakwood ended all square.