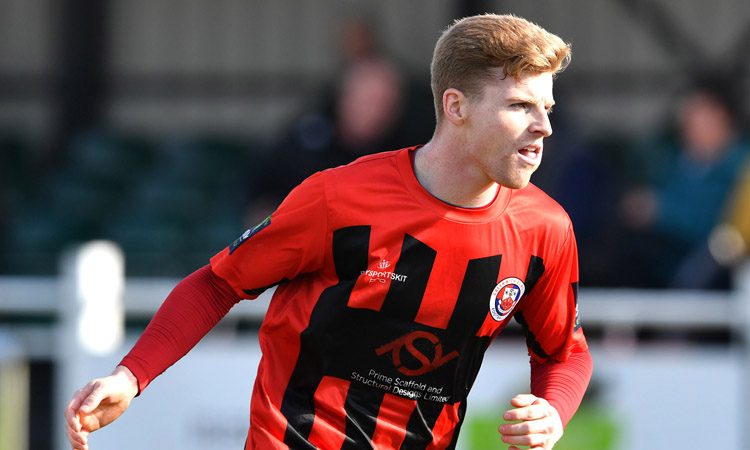 Jack Barham hopes his scoring spree at Greenwich Borough will earn him a jump up the football pyramid – and reckons he deserves a chance to test himself at a higher level.

The 21-year-old striker moved to the Bostik League South Division side early in the campaign from Phoenix Sports and has notched 35 goals in all competitions.

Barham, who has spent time training with Millwall and Cambridge United this season, will stay with Borough until the end of the season.

But after that it looks almost a formality he will weigh up options to play elsewhere.

And he cites the story of Mohamed Eisa, who left Greenwich in the summer, as an example of how a club’s gamble can pay off.

Eisa has scored 22 goals this season for Cheltenham Town in League Two.

“He didn’t get anywhere near as many goals as I have got at Greenwich but look at him now,” said Barham, who has netted 33 times in the league. “A manager took a chance on him. I just hope I get the same sort of opportunity.

“I’m not on a contract or anything. I want to get to the end of the season and see if anything pops up. You need someone to take a punt on you. I’ve never been in the pro game before and not had full-time training – I can only get better.

“I’m an ambitious person. I feel like I’m ready. Next season I’d like to go either National League or League Two. I’ve been in the Isthmian League for three years now and it feels like my time to go and get my dream, to go as far as I can go.

“When I was at Phoenix Sports at the start of the season, Ebbsfleet came in for me but I turned them down.

“I spoke to Tim [Miller, his agent] and we agreed I really wanted a whole season getting as many goals as I can to give me the best platform. Looking back at it, if I’d gone to Ebbsfleet early then it probably would’ve fallen down. The strikers they have got there at the moment, I don’t think I’d have been given an opportunity.

“There have been six or seven National League South sides that have wanted me, right up to the play-off positions as well. The stats don’t lie. People would look at the end of the season and ask ‘why did he move so many times in one season?’

“Even when Gary [Alexander] left [as Greenwich boss] I could’ve gone somewhere else, followed him, but I decided to stay where I am.”

If Barham’s aim was to hit the goal trail and make people sit up and take notice, he has done just that.

He scored five goals against Molesey in a 6-1 thrashing in early March.

“When I got three I thought the manager would sub me, because we had a lot of important games coming up, but he kept me on.

“I didn’t expect to get this many goals, not at all. I gave myself a target of around 20 or 25. As soon as I went past that my target was 40. With us probably being in the play-offs we have extra games for me to hit that.”

Former Millwall striker Alexander helped kicked Barham’s career on when he brought him to the DGS Stadium.

“He’d come and watched me a couple of times at Phoenix and said the service I was getting was not great,” explained Barham, who lives in Rayleigh Essex and supports Tottenham. “With him playing my position he knew he could develop me a lot more.

“The coaching I was getting at Phoenix was nothing compared to what I got at Greenwich. Gary is a striker, he knows how it works. He was doing extra sessions, improving my short game around the six-yard area.

“It has helped me so much. Barnsey has come in and he is a good manager with his tactics. I really want to get Greenwich up.

“I’d love to have two promotions on my CV at the age of 21, I couldn’t really ask for too much more. I got promoted with Thurrock through the play-offs last season but I only get 15 goals then.”

Alexander’s links with the Lions paved the way for a stint with the Championship outfit.

“It was more with the under-23s and gave me a really good insight,” said Barham. “I went there for two weeks. I think they are still keeping an eye on me and if we get in the play-offs then I imagine they’ll be down to watch.

“I played in a game against Coventry and everybody said I did well.

“Shaun Derry was in charge at Cambridge when I trialled there and he said he liked me a lot and he was going to speak to the board. The way it worked there he didn’t get the final say. I didn’t hear anything from him after that, it just fell to pieces.

“I thought I was going to get something because everything was sounding so positive, there had been no negatives.”

Borough lost 2-1 at home to Thamesmead Town on Tuesday despite taking the lead through Nassim Dukali.