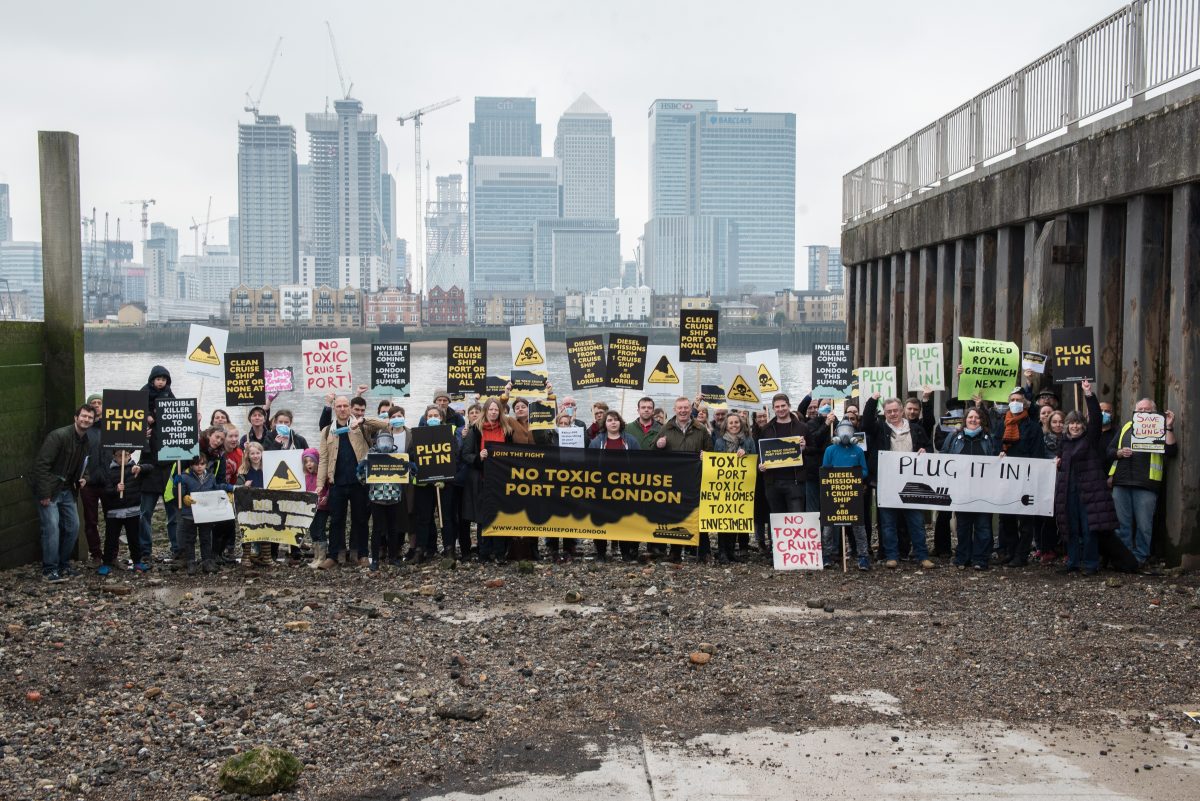 Campaigners have renewed an almost decade-long battle against a massive cruise ship terminal being built on their doorstep, which they say will spew out toxic pollution.

Greenwich residents gathered on the shores of the Thames to launch their No Toxic Cruise Port campaign.

The event was organised by the East Greenwich Residents’ Association (EGRA), which is calling for the installation of a clean onshore power supply which will reduce pollution as docked ships can plug in and switch off their engines.

Laura Eyres, 54, EGRA co-founder and leader of the campaign, said: “We don’t want fumes spewing into our neighbourhood, into our homes, into our schools, into our kids’ lungs.

“What’s incredible about all this is that there’s no law actually governing emissions on the river.

EGRA claims a typical ship would emit the same level of pollution as 688 idling lorries.

Current council planning permission makes no requirement for a clean power supply, meaning docked ships would use their own generators.

The site, owned by Morgan Stanley, is currently on sale. Jones Lang LaSalle (JLL) is marketing the rebranded Maritime View development after housing developer Barratt withdrew from the scheme.

Campaigner Ralph Hardwick, who lives opposite the development site, said: “Why would you want to live in a flat right by a cruise port with ships belching out toxic fumes?”

Ms Eyers said: “We think the tide is turning on the cruise liner terminal.

“The developers seem to be getting cold feet. It’s not popular with the community and it’s beleaguered.”

Kate Joekes, 51, a lecturer at the University of Greenwich and an east Greenwich resident, said: “Why would you put a large ship in the middle of London kicking out lots of pollutants?

Initial plans to develop the cruise ship terminal were approved by Greenwich council in 2011.

Plans for a larger development, which include the building of 400 apartments, were given the go-ahead in 2015.

Many Greenwich residents, lead by EGRA, have opposed the plans throughout. An unnamed resident lodged a judicial review challenge in 2016, on grounds relating to air quality.

The legal action was supported by a crowdfunding campaign, which raised £16,000.

A High Court judge ruled in favour of Greenwich council and dismissed the claim.

EGRA continued its opposition by presenting a petition to the European Parliament arguing that
environmental assessments had not followed EU law.

The commission advised that any member state that grants permission to a project that will pollute beyond recommended limits should take compensating measures to balance out the effects.

A spokeswoman for Greenwich council said: “The Enderby Wharf development will bring new jobs and businesses to the borough, increase tourism and deliver a significant economic boost to the local economy, further contributing to Greenwich’s strong tradition of welcoming visitors from across the globe.

“From the outset, the Royal Borough followed due process relating to this planning application, including seeking independent reports on specific technical areas such as air quality.

“We know that a number of local people feel passionately about Enderby Wharf. We have always sought to listen to their opinions at all times and will ensure that the conditions and obligations put in place by the planning board are honoured by the developer.”

JLL said: “On this occasion we have no comment.”

One thought on “Greenwich residents anger over cruise ship plans”