The striker hit a daisy-cutter eight minutes  from the end, which went a pack of players and plonked itself in the back of the net.

Deep into added time Fran Kirby notched up the second.

The relief was palpable from the 2,716 crowed who had expected a goal-fest.

Instead they got the stodgiest and anaemic performance of the season.

Eight changes were made, significantly goalkeeper Ann-Katrin Berger and Jess Carter, the architects of the three giveaway goals for the Germans were benched.

Fran Kirby had the first effort on goal for the Blues against Leicester City – a curling angled, right-footer from the edge of the Vixens inched wide of Kirstie Levell’s right post on six minutes.

Niamh Charles was next up, on 10 minutes, but after good set-up play, her effort went wide of Levell’s left post.

Canada’s Jesse Fleming, was at least on target with her 20-Harder, Levell, dived confidently, to her right to parry the ball wide. 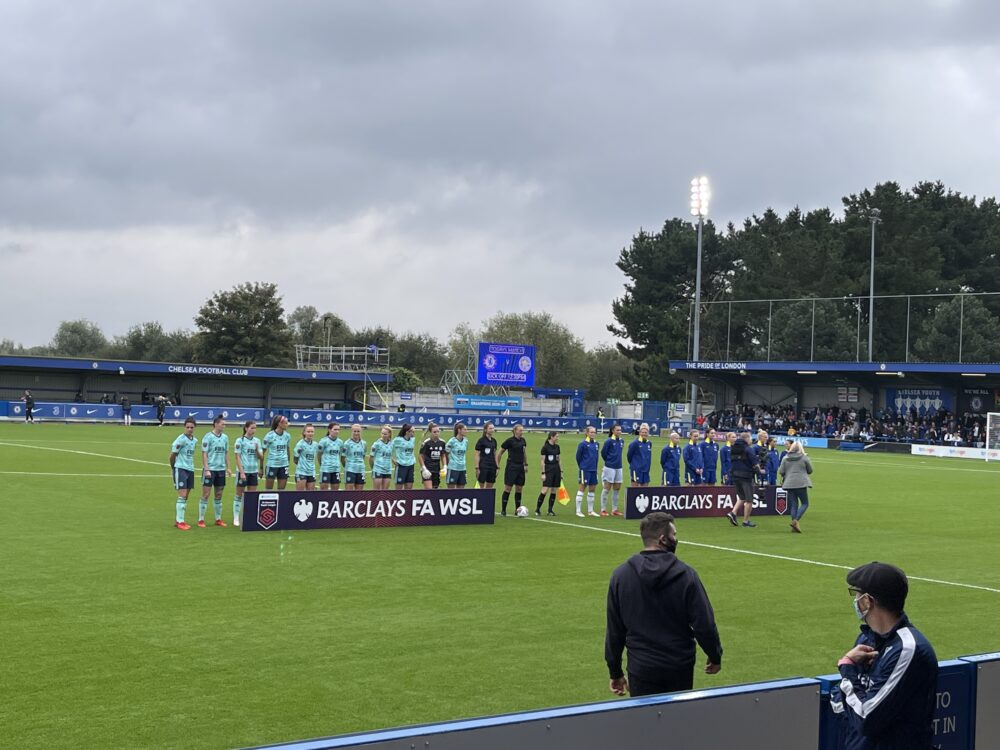 Aniek Nouwen had a good chance to redeem two poor passes earlier in the game to score on 24 minutes.

She got her head to a Fleming free-kick, but could not produce the necessary power or direction to trouble Levell who gleefully grabbed the ball.

The insipid first half saw Hayes make two changes at the break.

Off went unlucky Beth England – the striker had very little service, and on came Sam Kerr.

Magda Eriksson saw her close range header cleared off the line three minutes after the restart – Jessica Sigsworth seemed to injury herself s a consequence of the goal-saving clearance.

A brilliant save by Levell prevented Kerr from scoring with a point-blank, close-range header on 61 minutes after Kirby’s byline, cross was met powerfully by the Australian striker.

Hayes felt further changes were required, and on came Ji and Guro Reiten – Sophie Ingle and Jonna Andersson made way on 66 minutes.

Levell,was quickly becoming the player of the match – she kicked away a Harder shot, on 70 minutes as the Blues, while creating chances, looked anything like confident.

Hayes then took off her Centre-back skipper Eriksson and brought on attacking Erin Cuthbert.

With eight minutes left on the clock and the crowd sensing an embarrassing  0-0 draw, Cuthbert  fed Fleming on the right. She cut a byline cross back and Harder was on the spot to drive the ball home past the hapless Levell.

Kirby, who kept up her high energy levels throughout the game was rewarded deep into added time, when she broke free and slotted cooly gone to double the lead.