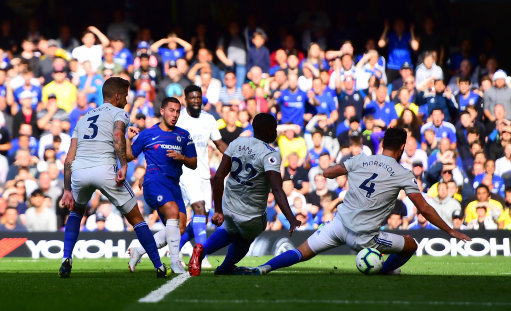 Eden Hazard showed just how vital he is to Chelsea’s cause by scoring a hat trick for the west Londoners as they came from behind to put Cardiff City to the sword, 4-1 at Stamford Bridge this afternoon. Substitute Willian, arguably scored the pick of the goals, a beauty from the edge of the Cardiff penalty area as the Blues went top of the league on goal difference from second placed Liverpool.

But it was Hazard pulled the Blues back into the game after going behind to a Sol Bamba header.

A daisy-cutter, a slightly deflected close-range effort and a penalty may not be the most attractive three goals, the Belgium will ever score but they were the difference to Chelsea and significantly earned the three points from a dour, dogged and defence-oriented Welsh side.

He scuffed a left-footer from a fierce drive by Marcos Alonso just wide of the Cardiff goal, as the Londoners went positively in search of the opener.

Cardiff looked strong on set pieces and Sol Bamba was unlucky not to head home from a corner meet. The downward just going wide of Kepa Arrizabalaga’s right post.

The warning as there and on 15 minutes a simple free kick was headed across goal and Bamba made no mistake from the six-yard line and tucked the ball home.

Chelseas responded quickly with two chances in a minute, the second saw Mateo Kovacic clip the ball goal wards  only for Etheridge to tip the ball away for a corner.

Terrific play with Giroud and Eden Hazard saw the France player shoot on goal, only for Bamba to make a last-ditch block.

Pedro was next up in attacking the Cardiff goal, but his sensational, left-footed curler from the edge of the box just crept past Etheridge and his goal.

Two more efforts by Pedro were wayward as a degree of desperation began to creep into Chelsea’s attacking play.

But the nerves were settled on 36 minutes thanks to the golden right boot of Hazard.

Receiving the ball from a move started by Giroud, the Belgium playmaker, let rip from the edge of the Cardiff penalty area. Sending a daisy-cutter that zipped across the grass, and across Etheridge and into the side-netting to level the score.

Two minutes before half-time and Hazard slipped home number two after a series of intricate one twos involving Giroud. The ball deflected off the body of Bamba but the mercurial midfielder certainly claimed it.

Mateo Kovacis limped off with a thigh injury on 50 minutes – Ross Barkley taking his place.

Twice Pedro went close to adding to the score, both times his effort were inches off the mark.

Bobby Reid saw his low curler just go the wrong side of the post.

Willian was next to enter the fray, Pedro coming off on 68 minutes.

A brilliant through ball by Hazard set Willian free on 80 minutes. The Brazilian raced into the penalty area and was upended by Bamba. Up stepped Hazard who slotted cooly home, sending Etheridge the wrong way way to notch only his second Hat trick for the Blues.

Seconds later and Willian found him self free on the edge of the box and he produced a sublime shot which, smacked the top of the Cardiff next to send most of the 40,499 crowd in to delirium.

Head coach Maurizio Sarri, took Hazard off to be replaced by David Zappacosta and to a standing ovation.

Next up is a midweek trip to Greece to face PAOK Salonika in the Europa league before a trip[, on Sunday across London to face relegation-haunted West Ham United.