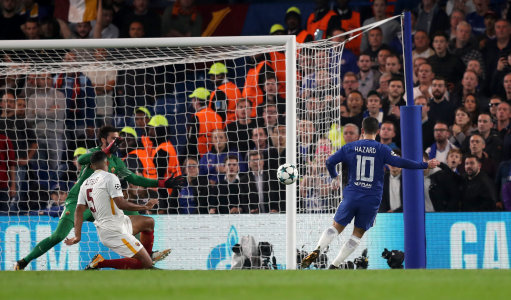 Chelsea survived a scare in an exhilarating Champions League group match tonight against Italian giants Roma, drawing 3-3 after first going 2-0 up, then conceding three before snatching an equaliser through Eden Hazard.

The Blues were far below their best and halted a run of two defeats on the spin.

They remain in control of Group C with seven points, Roma in second with five.

Chelsea while never in control of the game, cruised to a 2-0 lead through
counter-attacking strikes from David Luiz – his blistering 25-yarder screamed into the back of the Roma net. Hazards’s close range volley put the Premier League leaders firmly in the driving seats.

But then it all went wrong as ex-Manchester City duo Alexander Kolarov and a brace from Eden Dzeko plunged Stanford Bridge into silence.

But Hazard popped up to restore parity and claim a point which will have eased the growing pressure on head coach Antonio Conte.

Alvaro Morata had a golden chance to open the scoring for the Blues’ in their first attack of the night on five minutes.

Marcos Alonso, latched onto a loose pass and set off on a counter-attack, Tiemoue Bakayoko collected the ball, which in turn went to Eden Hazard. The Belgium playmaker cut open the Roma defence, allowing Morata a clear run at goal. However the Spain forward decided to take the ball early, just inside the penalty area, and side-footed an easy and weak effort straight to Alisson Becker in viola.

At the other end, two minutes later Diego Perotti, let fly a fierce shot from just outside the Chelsea penalty area and the ball zipped inches over Thibaut Courtois’s crossbar.

But on 11 minutes, the home side struck from the sweet right boot of centre-back David Luiz, who, after seeing his pass rebound back to him 25 yards out, produced a sublime curler of a right footer, to bend the ball around the despairing dive of Becker and plonk firmly into the back of his net.

Courtois was spot on in his positioning on 30 minutes, denying Radha Nainggolan at his near post as Roma took advantage of the exposed left flank, where Alonso had been caught napping and out of position.

Deservedly Roma struck back almost immediately when ex-Manchester City man Alexander Kolarov, on the left swept in and let fly on the edge of the Chelsea penalty area. The ball took a little nick off Andreas Christensen, but it was enough to slightly alter the flight of the ball, deceive Courtois and smash into the Chelsea goal.

There were no changes at half time by either side.

But a change was made bu Antonio Conte and David Luiz was angry that it was him on 58 minutes.

Luiz saw the indicator board with his number and waved a dismissive finger at the Chelsea bench. When he was replaced a minute later he drugged to the bench, sat down for less than a second before heading to the changing room for an army shower.

Assistant manager Carlo Cudicini attempted to call him back to no avail.

Chelsea’s lead evaporated in a moment on 65 minutes when another ex-manchester City striker Edwin Dzeko latched onto a regulation through ball. The hitman struck a wonderful left-footed volley that arrowed past a surprised and flat-footed Courtois.

However a minute earlier Morata had a chance to make it 3-1 to the Blues but fluffed a chance to round Becker in goal. His angled shot hopelessly wide of the mark.

Bakayoko entered referee Demir Skomina’s book for a needless foul just outside his own penalty area on 70 minutes. That proved disastrous as from the resultant free kicks Dzeko had the easiest chance to glance home a header from the six-yard box to incredible putt the Italian side 203 up.

But despite being second best for much of the game, The Blues took just five minutes to level. The glancing header, this time from Hazard from a clipped Davide Zappacosta pass, inched past Becker and slipped into the side of the net.

Two changes, Antonio Rudiger for Zappacosta and Willian for Hazard followed as Conte went inn search for the winner.

Next up it’s the visit of high-flying Watford to Stamford Bridge in the league on Saturday.