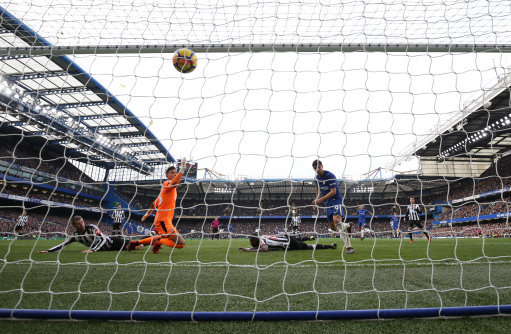 Chelsea woke from their early-morning slumber to overcome a deficient to beat lacklustre Newcastle United 3-1 at Stamford Bridge with Eden Hazard once again the main protagonist, scoring twice, with Alvaro Morata getting then other with an opportunist header.
Like Swansea in midweek, this was not the Blues at the most fluid or potent, but it was enough to overcome the Geordies who had former Chelsea interim manager Rafa Benitez at the helm.
Chelsea remain in third, a point behind Manchester United, and, more significantly, eight ahead of Spurs.
Chelsea looked shaky at the back from the kick-off and so it was no surprise that the first effort, albeit a tame one came from the visitors with Mikel Merino slide-footing an edge-of-the- penalty area shot straight into Thibaut Courtois’s hands on eight minutes.

The inevitably goal came four minutes later when errors by Andreas Christensen and Marcos Alonso let in Dwight Gayle and the striker stroked home the simplest of chances.
Christensen attempted to make amends five minutes afterwards, but his scuffed header from a Cesc Fabregas corner sailed over Karl Darrow’s crossbar.
Hazard broke through only for Darlow to thwart him, Alvaro Morata failed to get a strike on goal with the follow-up.
Christensen the smacked the Newcastle crossbar on 20 m injures as the Blues finally woke up and started to press forward.
That proved critical as the Blues levelled a minute later. Morata put Ciaran Clark under pressure, the ball fell to Hazard and his crashed his angled ball into the ground and it bounced over Darlow, who should have stayed on his feet rather than go to the turf.
With confidence oozing the Blues took the lead on 32 minutes. Moses took advantage of some wayward heading just inside the away side’s penalty area. He zipped across a fierce byline cross from the right. Morata, was on the spot, taking advantage of a slip by defender Javier Lejeune to comfortably nod home from six-yards out.
It was the Spain striker’s third goal in 12 appearances, his ninth league goal overall.
There were no changes from either side at half-time, but at least the Blues were on the front foot from the beginning of the half.
Despite much possession, The Blues were making little headway against a dour defensive-orientated Newcastle.
A deflected shot by Hazard on 54 minutes, was the second half’s opening effort.
A flying long-range effort by Ayoze Perez, which cut across Courtois and a way for a goal-kick, was the last effort by the player who was replaced by Issac Hayden on 61 minutes.
A clipped header by Victor Moses from a Azpilicueta cross was goal-bound, but this time Darlow got his body behind the effort and saved easily. A sublime piece of attacking play, involving Hazard and Fabregas saw the Spain midfielder bisect the Newcastle defence, sending in Moses. The wingback took one touch before being hacked down by Matt Richie.
It was an easy penalty decision and Hazard took the spot kick, dispatching the ball Panenka-style, tapping the ball down the middle mom the goal as Darlow, embarrassingly dived to his left.
Conte then decided to rest Hazard and Fabregas for Tuesday Champions League match against Atletico Madrid, at home. The duo were replaced by Tiemoure Bakayoko and Willian.
This was quickly followed by Gary Cahill replacing Christensen.
The game was over, three points won.