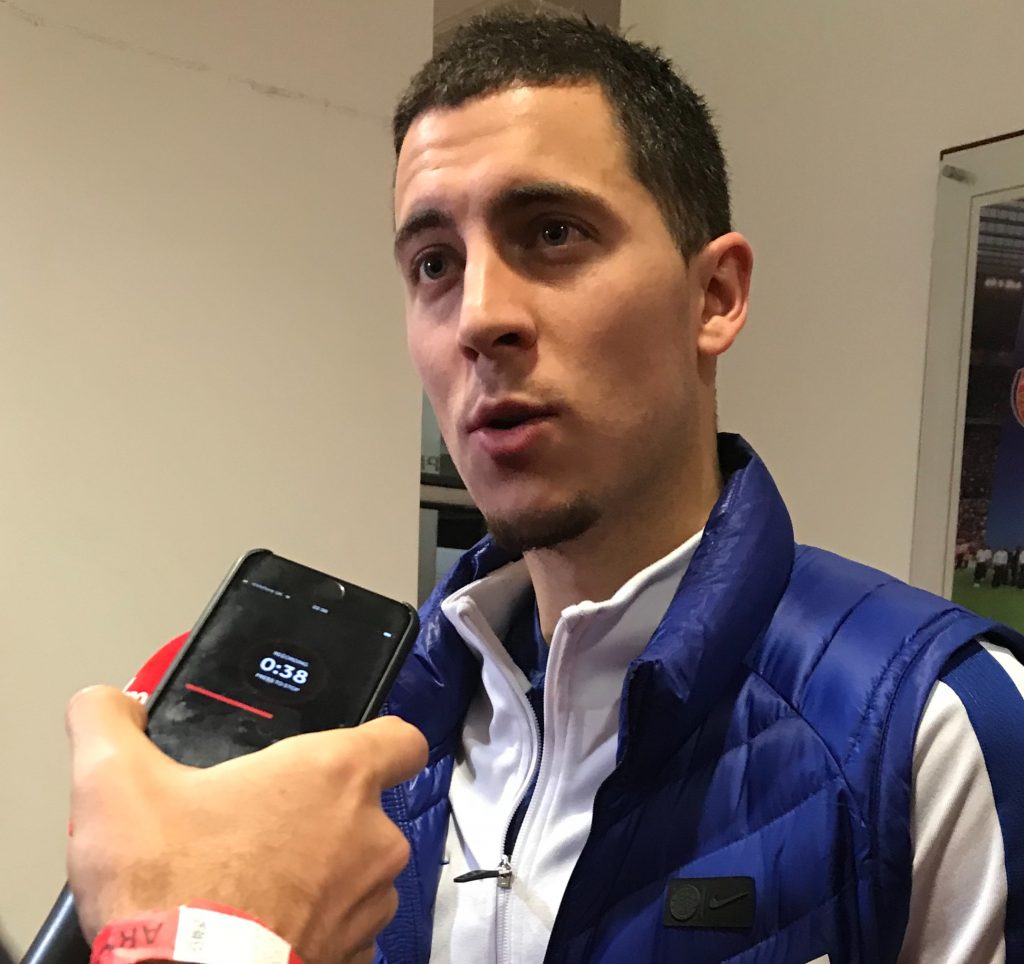 Eden Hazard has told Roman Abramovich to keep his money in his pocket, he doesn’t need to buy another striker.
The rumours of Antonio Conte needing another hitman are gathering apace with Roma’s Serbian
Edin Džeko apparently flying in tomorrow to have a medical ahead of a transfer to the champions.
Hazard hit a brace in the 4-0 rout of Brighton on Saturday, as Chelsea went on a goal rampage after a succession of 0-0 draws.
Hazard does not think the Blues need worry about getting anyone else in.
He said: “Football is simple – keep the ball on the ground and try [to play] like we did. I think we have two very good strikers in Alvaro and Michy.
“If they are not ready to play I can play striker, so I don’t think we need [another one].
“Because we are missing chances people are saying we need another striker, but if we are scoring goals we are the best attack in the league and no one can say we need a striker.
“It depends on the form of the team and I think we’re happy with the team we have.

“If you want to play with long balls you need a target man, if you want to keep the ball on the floor you need a small guy. It depends how you want to play.”
With the transfer window closing at the end of the end of the month, Hazard once again reiterated that he is happy at Chelsea. But would not say if he would sign a new contract.
Responding to his father’s comments linking the Belgium with a move to Real Madrid, Hazard joked that his father was in trouble.
“My dad says some bad things,” he said.
“Yeah. I talked with him, no worries. I’m focused with Chelsea. I’ve got two years contract left and I’m happy here. Like I said 10 times before, I want to finish this year and then we’ll see. But I’m happy here.”

Hazard was in imperious form at the weekend and is now fully fit and ready for the business end of the season.
He lasted the full 90 minutes against the Seagulls.“Yeah I was not sure, but now I’m sure! It’s good to play, good to score, so everything was good against Brighton.

“When I’m on the pitch I try to give my best, when I’m not on the pitch on the bench I want the team to do the best. That’s it.”
Having missed pre-season due to injury, now he is feeling more than Hazard confident.

“I think it’s normal when you miss two months of pre-season with an injury,” he said.
“I had a good start to the season after the injury, and then it’s not easy to stay on the top. But I try, I try to work in training and when I’m on the pitch I try to give everything.
“Sometimes it happens like against Brighton when we play an amazing game, sometimes not. I just keep going, keep training hard and try to do my best.
“From the first minute until the last one you feel confident. When you score early it’s easier because you have the confidence straight from the start of the game.
“When you see the second goal with Willian, it’s one of the best of the season because we create movement with one touch, one touch, and then the finishing is good. We want to do more like this.

“Of course we are sharp on the floor, so maybe it’s easier to do the movement we are working on in training.”
The game was in sharp contrast to recent dour scoreless matches.
Hazard suggested: “I think when we play against teams they defend a lot, because they know we have good quality players. We need to find the solution – when it’s not me it has to be Willian, or Michy, or Alvaro when he’s there. If we are not ready to do that we are in trouble. That’s why we are working in training and then we are trying to do our best.”