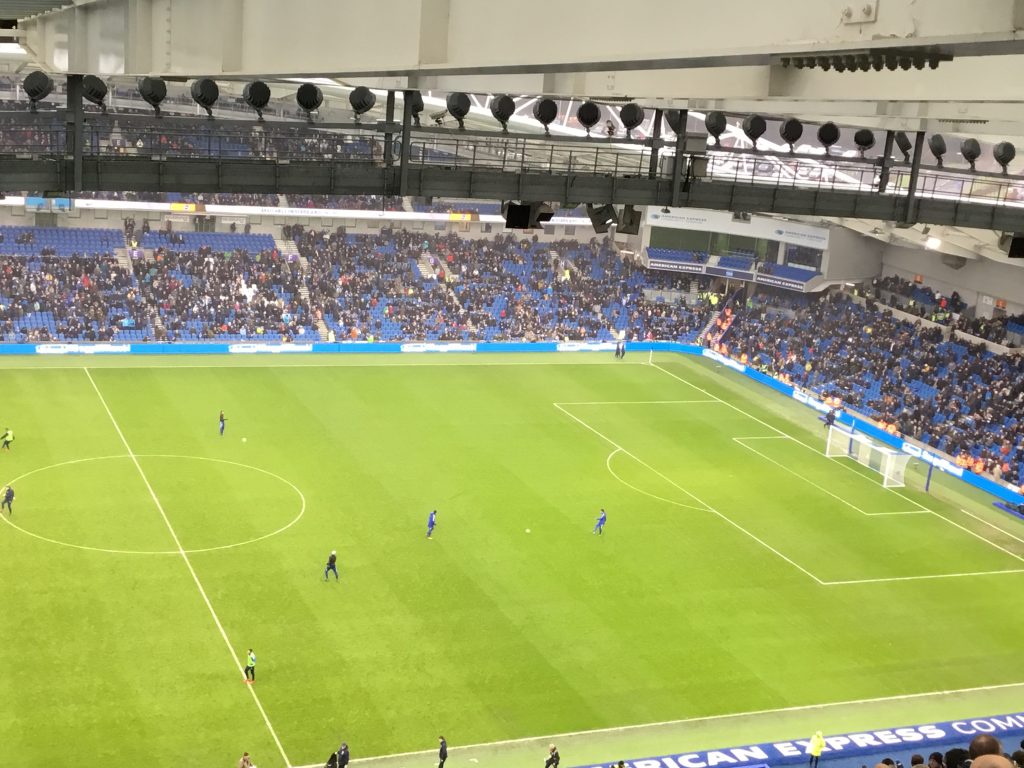 Eden Hazard struck twice as the mercurial midfielder mesmerised a shocked Brighton as the Blues went on the rampage and clipped the wings of the Seagulls. 4-0 was the scoreline, but it could have been more.
Chelsea recorded their first win in six matches and are back to goal-scoring ways following a spate of disappointing 0-0 draws. Chjelsea’s Other goals came from Willian and Victor Moses.
But the rout was all down to Hazard.
This was one of those games, when the ball stayed at his feet as he tore Brighton apart at every opportunity.
His two goals, the second were power and grace combined.
The Blues went 2-0 up within six minutes and Hazard’s second half beauty.
A weak Willian free-kick on two minutes was easily held by Mathew Ryan as the Blues started well.
And a minute later the champions struck. Excellent work by Michy Bakayoko, fed the ball wide to Victor Moses. His run and byline cross deflected off the boot of Sale Stephens, into the gleeful path of Eden Hazard. The midfielder took one touch, and then smashed the ball high past Ryan and into the back of his net From eight yards out.
Another three minutes later and the goal of the Chelsea season was scored. Lewis Dunk lost possession and in the spate of five seconds, sensational interchange play between Willian, Hazard, Batshuayi saw the Brighton defence mesmerised and Willian was on hand to thump the ball past Ryan to double the score.
Dolly march, on 14 minutes, had then first real effort for the home side. But his low drive was no problem for Willy Caballero, in for the Thibaut Courtois, who injured his ankle in training.
Caballero hacked down Ezequiel Schelotto, on 16 minutes – but referee Jonathan Moss ignored the justified penalty pleas.
Caballero made a goal-saving, acrobatic save to thwart Tomer Hemed’s almost perfect downward header on 30 min utes.
Somehow, the ex-Manchester City stopper hooked the ball away from the goal line with his left hand.
Schelotto then demanded another penalty on 35 minutes, after falling to the ground from a Bakayoko challenge. Moss ignored the pleas once again- this time justified.
His dissent earned him a yellow card.
There were no changes at half-time by either side.
On 50 minutes, with Andreas Christensen tending to a head injury, Brighton went onto a counter-attack. The centre-back was waved back onto they pitch by Moss, but not before the home side crashed the Chelsea crossbar from a venomous header by Davy Propper.
Christensen could not continue and on 58 minutes decided to come off, David Luiz replaced him.
A Willian free-kick a minute late, beat the Brighton wall, but Ryan managed to get a tip of his finger-tips to it and the ball rebounded off his left upright.
A deflected shot by March, zipped past Caballero, and thankfully, his goal as the ball ent for a corner.
Caballero came to Marcos Alonso’s aid on 66 minutes when the left back failed to latch onto the ball on the edge of his area. Schelotto brushed him aside, took a single touch before driving the ball towards the Chelsea goal. Caballero was quickest to react and smothered the left-footed effort.
Alonso’s day ended on 75 minutes. He was replaced by Davide Zappacosta.
Hazard completed a perfect day for himself, by scoring his second.
Picking the ball up from midfield, on the left, he Stroud majestically towards the Brighton goal. He cut inside, and while the Seagulls defence were backing off, the maestro cooly slotted home from just inside the penalty area, with Ryan left flat footed.
Charley Musonda had 10 minutes to impress Antonio Conte as he replaced Willian.
Victor Moses tucked home beautifully from close range after latching onto Musonda’s defence-splitting ball.
Next up for the Blues is a Carabao Cup second leg semi-final, on Wednesday against Arsenal at the Emirates, Stadium.