Josh Davison has revealed how Lee Bowyer’s tough approach helped kick on his game after a “surreal” start to life at Charlton Athletic.

The Addicks’ poor opening to the League One campaign has handed the 22-year-old striker the chance to impress with manager Nigel Adkins yet to field a settled side over a sustained period.

Davison has started three of their last four matches and scored in back-to-back fixtures against Portsmouth and Bolton Wanderers.

Davison has fully justified Adkins’ decision not to send him out on loan again after spells with Woking and Forest Green Rovers last season.

The Tottenham fan made his Charlton debut as an 88th-minute substitute against West Bromwich Albion in October 2019, just eight days after joining on a deal until the end of that season.

Davison had opted to leave Enfield Town after netting 21 times in 25 matches for the Isthmian League Premier Division outfit.

“It was all a bit quick and surreal,” he told the South London Press about his move to SE7. “I went from non-league, playing in front of 300 or 400 people to being on the bench at Bristol City.

“The players we had in the team were unbelievable – Conor Gallagher, Lyle Taylor and Naby Sarr – and I was a bit shell-shocked to be around it at first. At first it didn’t feel real. After a while you become accustomed to it. Darren Pratley was very good, he helped me settle in. Him and Pearcey [Jason Pearce] looked after me.”

Davison made five starts and 10 appearances in the 2019-20 season. He admits he developed under then boss Bowyer, who was not afraid to tell home truths to players.

“Him and Jacko [Johnnie Jackson] both helped me to do extras and they told me what they wanted,” said Davison.

“Bow was quite rough with me about my hold-up play. That was one thing I had to learn quickly. He pushed me hard and now it is one of the best things about my game, so it was a good learning experience.”

Davison’s improvements saw him sign a new two-year contract, with an option of an extra 12 months, in June 2020.

He started off on Peterborough’s books following a successful six-week trial but was released at 18. 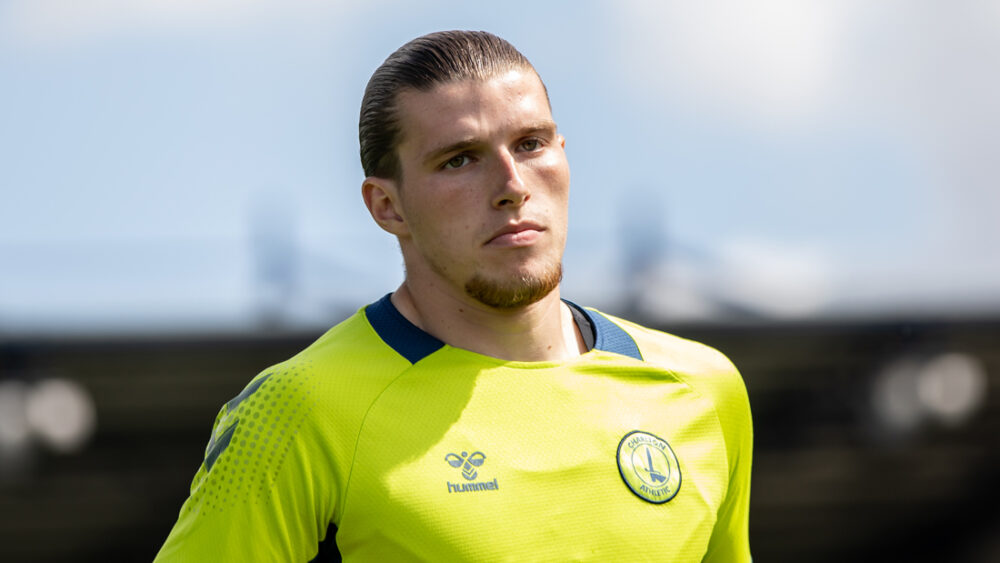 “The gaffer changed towards my decision day there,” explained Davison. “Steve Evans came in and he released me. There was no real reason given, he didn’t even sit down with me. I got told by an academy director.

“You feel low and you panic, thinking what the next step is. But I just thought about coming home and trying my hardest to get back in the system as quickly as possible.”

Davison trialled with Stoke City and Millwall. He also toyed with the idea of signing for Latvian side FK Liepaja. They are managed by Gordon Young, who used to be a coach at Falkirk and Dundee United.

“He is also Latvia’s national team assistant manager and he asked me to come over and see if I liked it,” said Davison.

“I went over there for a month and a bit, but I didn’t end up staying. I didn’t enjoy it that much.

“The language barrier was tough to deal with at a young age and I was living by myself in a different country. I didn’t feel happy. I felt coming back and playing non-league was a better option for me.”

And that desire to chase and hound has aided his passage into the senior set-up.

“I’m happy to be scoring and contributing to the team but it comes with a pinch of salt if we’re not winning as much as we should be,” said Davison, who has scored five goals in 21 appearances.

“Training week in and week out in a first-team environment helps because the expectation of what you need to bring ever day is a lot higher. That all adds up to you improving. Technically I feel I’ve got better, due to the calibre of player that I’m around.”

Davison and Stockley might be competing for a spot in Adkins’ team but that doesn’t stop the older man from passing on advice.

“I’ve never seen someone as good in the air as Jayden,” said Davison. “The way he wins the ball and holds it up is unbelievable.

“He talks to me a lot about how he does it. It’s good to be learning that, even though you can’t mimic that straight from the off.”

He added two more as a strong line-up won 4-1 against Southampton U21s to qualify for the next round of the EFL Trophy.

Tomorrow’s scheduled fixture against Rotherham United was postponed due to international call-ups. Davison said: “We’re taking a break just as it seems like we may be able to go on a run now, so it might slow us down.

“But hopefully it is a chance for us all to get together as a group, get stronger and be ready when we come back.”