Hercules Wimbledon Athletic Club’s cross country runners boosted their chances of lifting this season’s Surrey Men’s League Division One title with an emphatic victory in the second match of the season on Wimbledon Common on Saturday.

Dan Cliffe, the reigning Cheshire cross country champion, who headed the senior men’s race early on, made an impressive debut for Hercules Wimbledon. He led the gold and red sash-vested runners to team victory by finishing third of the 275 runners, completing the five miles course in 26:43.

Packing their first five scorers in the top nine, the Hercules Wimbledon squad ran out comfortable team winners with their lowest-ever score.

After two of the season’s four matches Hercules Wimbledon (288) already have a firm grip on the title with a big lead over second-placed Belgrave (681) and holders Kent AC (730).

Veteran Richard McDowell helped make it a double for Hercules by leading the B team to victory, finishing 32nd in 28:19. 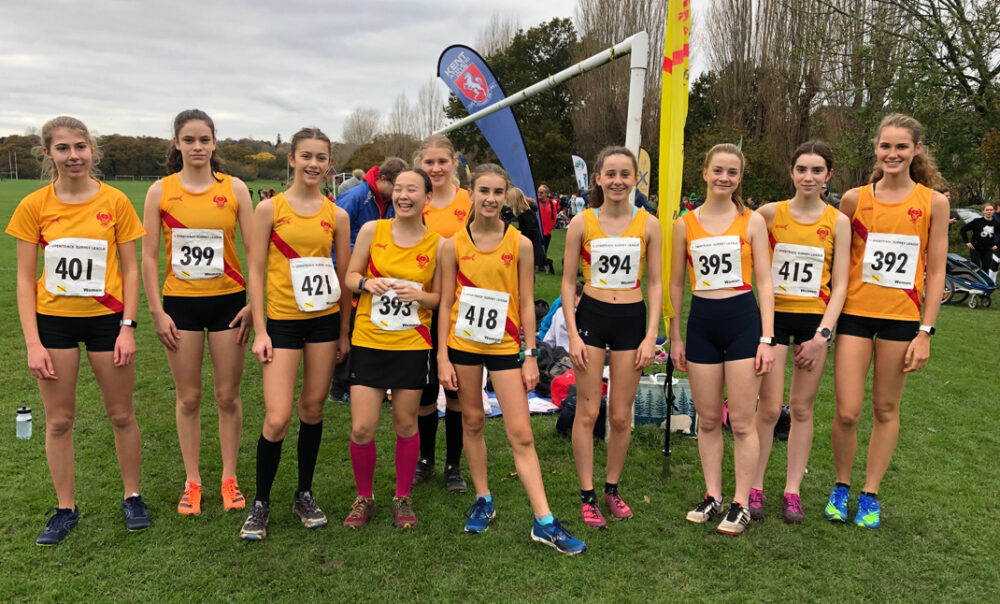 The club’s youngsters also ran well with Will Taylor finishing third in 15:36 leading the U15 and U17 team to third place and Sam Dyson, fifth in 12:30, leading the U13 team to runners-up spot.

The U17 girls were the most successful from the club in the Surrey Ladies League fixture, also staged on Wimbledon Common. Packing three in the first four finishers they narrowly beat first match team winners Epsom & Ewell.

Emily Grey, who was just pipped for the individual honours by one second led the winning Hercules team in taking runners-up spot in 13:38 with Mille Thorpe third in 13:44 and Lulu Weisz fourth in 13:47. Charlotte Lam completed the winning team, finishing 13th in 15:17.

Their U13 girls were runners-up out of 19 teams. Top finisher was Isabella Harrison, third of the 59 runners in 13:32. Charlotte Gurney led the U15 team to fourth spot.

Veteran marathon runner Claire Grima was the top Hercules Wimbledon finisher in the senior women’s 6km race, taking 28th spot out of 279 runners. She was third veteran over 40.

Supervet Lisa Thomas was the best of the 23 Hercules Wimbledon runners in action in 11 different parkruns. She was third woman on Wimbledon Common in 21:16.