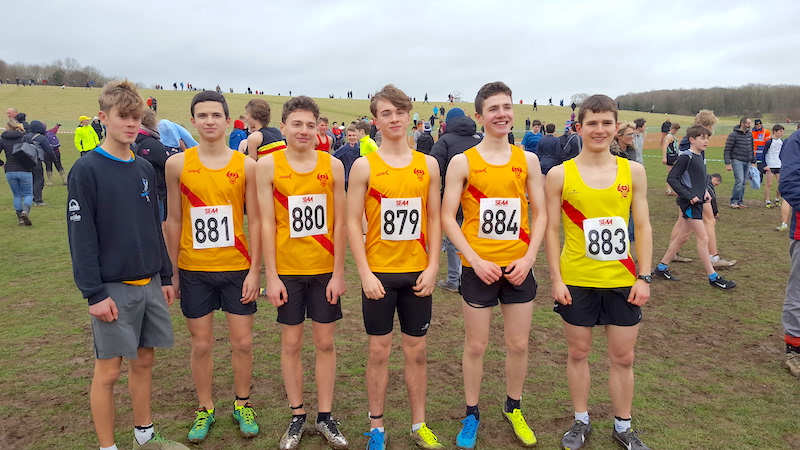 The senior men’s cross country team posted their best effort for almost 50 years when they finished fifth in the South of England cross country championships over a quagmire of a course and in pouring rain at Stanmer Park, Brighton, on Saturday, writes Tom Pollak.

The side, which recently completed a hat-trick of wins in the Surrey championships at Dorking, retained their Surrey senior team title.

None of the team was born in 1974 when Hercules Wimbledon finished third in the South of England championships at Parliament Hill Fields led home by Frank Briscoe who took the individual title 44 years ago.

They go into the final Start Fitness Surrey cross country league Division One match on Wimbledon Common with a narrow lead over holders Kent AC.

Once again the team was led in by Ben Toomer, who finished 31st of the 733 runners to complete the challenging 15km three-lap course. He was followed by Fred Slemeck (49th), Andrew Penney (57th), Alex Robinson (62nd), Dimos Evangelidis (63rd) with Matt Sharp (65th) completing the scoring six. There was plenty of back-up for the scoring team from William Russell (81st), Jonny Cornish (89th), Finn Johnson (99th) and Jonny Earl (146th).

Team manager Fred Green said: “It was a tremendous result in absolutely awful conditions. It was dry for the first lap but the skies opened and it poured down. Runners were sliding, slipping and falling all over the place. It was real cross country but our team showed their strength in the most testing conditions.”

The under-15 girls were the second best Surrey quartet. Georgina Clarke was 36th, just one second ahead of Ellen Weir (38th) with Johanna Tofte (44th) and Selma Hegvold (118th). Lloyd Hodgson was the top Hercules Wimbledon finisher in the under-13 boys race in 66th place out of 260 runners with Sam Spencer, two days after finishing a fine seventh in the Middlesex Schools Championships at Harrow, 99th.

Hercules Wimbledon were top Surrey team in the men’s under-17 championship with Zac Purnell 51st, Henry Silverstein 73rd, Sam Barker 98th and Daniel Illis 138th out of 169 finishers. The under-13 girls team was third from Surrey. It was led in by Lulu Weisz (25th) with Lauren Armitage (37th), Millie Thorpe (68th) and Bailey O’Leary (132nd) completing the team.