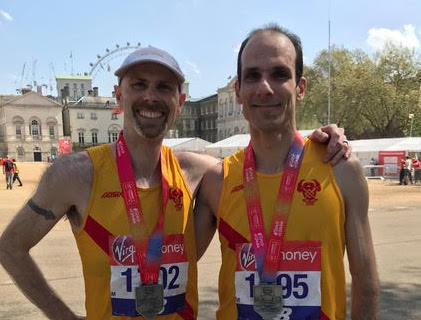 Richard McDowell was the leading Hercules Wimbledon runner in the London Marathon from Blackheath to The Mall, reaching the halfway point near Tower Bridge in one hour 13 minutes 15 seconds.

Evangelidis managed to pass McDowell at Big Ben with about a mile to go to finish 14th in the championship race in 2:27:39. McDowell, who celebrated his 39th birthday three days earlier, one place and 17 seconds behind.

Evangelidis said: “It’s always great to run negative splits. My plan generally is to approach the marathon conservatively. I was extra cautious as I’d had a sore throat and cough and had been feeling under the weather the previous week, plus the expected heat – which I can’t stand despite being Greek.”

Third Hercules finisher was Robbie Hynes – 457th out of more than 40,000 runners in 2:50:29 on his London debut. He took almost five minutes off his PB set in York last year.

Claire Grima, running the London marathon for the 12th time, achieved her aim of being the top veteran woman over-40 finisher. She was eighth in the women’s championship in 2:53:13.

She said: “That was the toughest marathon to date. I’m pretty disappointed with my time. I was really hoping to get a PB, but it just wasn’t my day. The W40 win was a silver lining and I placed eighth which was the same as last year, so I have some positives to take from it.”

Hercules Wimbledon had 21 youngsters in the mini-marathon over the last three miles of the main course from Old Billingsgate.

Sam Barker, running for Merton, and Henry Silverstein (Wandsworth) finished 18th and 57th in the same category in 16:07 and 17:16.