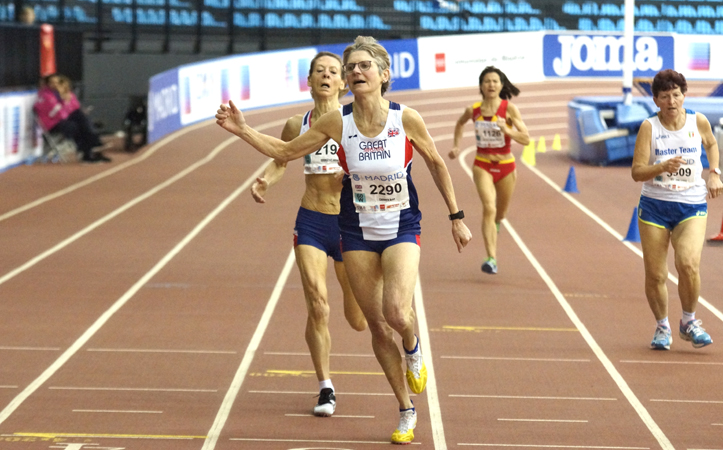 Garnier, 63, snatched an unexpected victory in the women’s over-60 1,500 metres final in 5:49.21 seconds, less than half-a-second ahead of British rival Alison Bourgeois. It reversed their finishing positions in the British Championships at Lee Valley a fortnight earlier when Bourgeois won by more than a second.

Garnier said: “I was very nervous before the 1,500m because I’d been through a low patch in January. Once out on the track the nerves turned into positive adrenalin. The race unfolded with a Spanish girl some way ahead and Alison tight behind me. I ran safely within myself but when Alison rallied I countered. We overtook the Spanish girl and at the bell I went for it and it worked. I wasn’t going to lose!”

Garnier also competed in the 5km cross country championship where she again managed to beat Bourgeois, this time by three seconds, but had to settle for individual silver behind a Spaniard who won by 29 seconds.

“I decided to give it everything not knowing much about the opposition apart from my British team-mate who told me she was going to let me lead the way. I knew she would be hot on my heels.

“Conditions were very unpleasant with a bitter icy wind which blew strongly into our faces as we ran up a tough hill only 200 metres from the start. We did that three times. We were kept for 25 minutes at the start so my warm-up went up the spout.

“As I finished up the final little hill I was fighting with all the grit I had. Alison was four seconds behind and a stunning Spanish lady was the well-deserved winner. However best of all was that our third scorer ran so well to finish sixth and we took a wonderful team gold. It was frighteningly close but we won by 17 seconds. Such a great win.”

Earlsfield-based Bogor-Ingram, the British Masters 60m, 200m and 400m champion, thought his best chance of a gold medal in Madrid was the 400m but his hopes failed to materialise as he was beaten by a powerful German who broke the meeting record of 52.47 seconds ahead of Bokor-Ingram’s 53.31 which was disappointingly much slower than the 52.67 he posted in winning the British title at Lee Valley a fortnight earlier.

He said: “The winner took us through 200m in 24.4, which was a bit quicker than I would have liked and it took it out of me for the second 200m. I was obviously very pleased with the 800m. I executed my race plan exactly right and ran an indoor PB.

“I was most pleased with the 200m as I had to run the semi-final two hours after the 800m final and managed to qualify. I then ran an indoor PB of 24.16 in the final from lane two. The most fun was the relay though where the British team managed to snatch a bronze.”