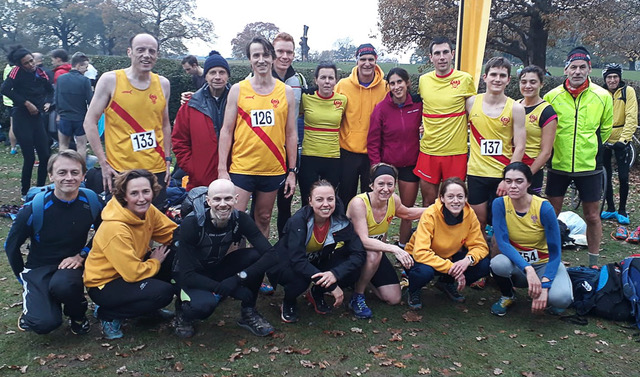 Andrew Penney gained a historic victory in the Financial Services cross country championships in Richmond Park when he became the first athlete from the club to take the title.

Penney, 27, was competing in the event for the first time and was among three runners who broke away from the 200-strong field soon after the start of the 5.75 miles race before edging away to win by nine seconds in 30:11.

He led BlackRock, who were also contesting the championship for the first time, to fifth team place.

Most of the club’s top runners gave the South of the Thames 5 Miles Cross Country race a miss. Richard McDowell led the men’s team home in eighth.

Jonny Cornish and Claire Grima had strong runs in the Bushy Park 5km parkrun on Saturday morning with Cornish taking second place out of 1,118 runners in 15:18 and Grima third in the women’s race in 18:13. Justin Reid was first over-45 veteran in 17:14, posting the top male age-graded performance of the day.

Hercules Wimbledon had three runners among the top six finishers on Wimbledon Common with David Lewin leading the 17-strong club contingent home in 17:41. Teenager Hector Revill was fifth in 18:09 with Joe Toomey sixth in 18:32.

Richard Evans, who ran in Morden Park later in the day, was top over-55 veteran finishing 15th in 19:58. Albane Fery was sixth woman finisher and Lisa Thomas ninth.

Alexie Calvert-Ansari was seventh out of 449 runners in his first appearance for 15 months in the Fulham Palace event in 17:01, just 17 seconds slower than his best.