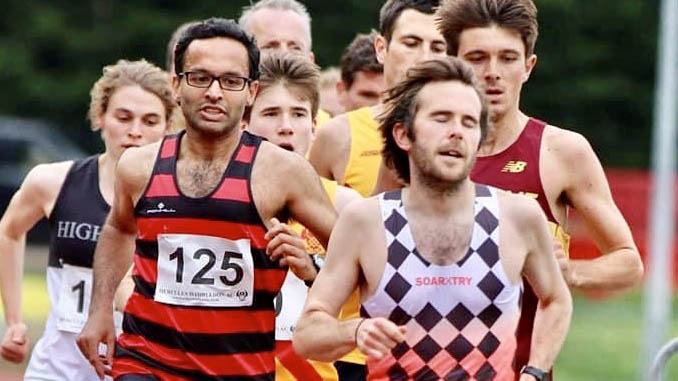 The next men were Ross Brown, also running a PB in 16:09, with Tom Brookes only a couple of tenths of a second behind him.

Sophie Harris was fastest of the Harriers women as she clocked a PB of 16:19, placing third female behind European Indoor 1,500m silver medalist Holly Archer.

Harriers were winners of the U13 girls category with Orla Wright, Sophie Wright and Florence Mills and U13 boys, comprised of Dylan Gillies, Jack McLennan and Caspian Holmes.

The U15 boys and U15 girls both placed second. The boys were Fabian Whitelock, Keeran Sriskandarajah and Josh Lee Baum and the girls B team, ahead of their A team counterparts, were Rosalie Laban, Eva O’Hanlon and Vivi Marshall. The A team, who placed third, were Sophia Sahai, Lucy Wright and Izzy Perry.

The ongoing issues with the competition usage of Tooting Bec track saw this year’s Sri Chinmoy 24 Hours race held at Battersea Park. Ian Jack, 43, took part in this gruelling around the clock run, placing 18th of 45 competitors and completing a distance of over 104 miles in the allotted time.

Fiona de Mauny was second woman at the Reigate Half in 86:41, with husband Chris six seconds behind her and 24th overall in the race.

Jordan Foster ran 88:37 at the Chester Half as she returns to racing fitness less than a year after the birth of her daughter Gracie and now looks forward to the London Marathon with much greater confidence.