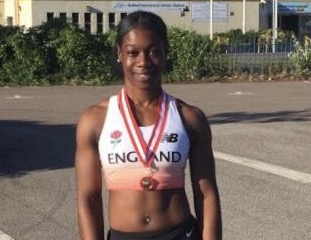 The history of women’s sprinting at Herne Hill Harriers was re-written over the weekend as Kristal Awuah produced a stunning display of 100m and 200m running.

Coming into the English Championships as reigning England under-20 100m and 2017 English Schools champion amongst numerous other accolades, Awuah has proven she is adept at getting into peak shape for the majors.

Despite her stellar record, not many would have expected what must have been at, or very close to, the performance of the weekend by any athlete at these Championships.

Her 11.37 semi-final performance was one of the great pieces of sprinting we have seen amongst British juniors, elevating her to top 10 on the UK under-20 all-time list.

Another measure of the calibre of this performance was that it ranks her fifth in the UK in 2018 for junior and senior women, and just outside the qualifying standard for the senior European Athletics Championships.

After such a stunning semi, the final victory almost seemed like a formality and Awuah duly dominated twith an 11.50 clocking.  Also competing in the under-20 100m was Lakeisha Owusu-Junior, running a legal 12.21 in the semi-final.

Awuah returned for the 200m on Sunday, and removed almost two seconds from her previous PB to win her heat easily in a legal 23.66 which dipped under the World Junior qualifying time.

She opted not to contend the next two rounds, and will look forward to competing at the World Juniors from July 10-15.

Southern under-20 and 2017 English Schools champion Alex Brown ran an excellent 1,500m heat on Saturday to qualify for Sunday’s final.

She ran an excellent tactical race to hit the front hard with 400m remaining and crossed the line in sixth place (4:32.71). It is Brown’s first year in the age group.

Also making a welcome return to top-level competition was Charlotte Alexander, an under-17 athlete running in the under-20 age group.

She finished fourth in 9:38.59, well inside the qualifying time for the European Youth Championship in Gyor, Hungary between July 5-8.

Ore Adamson competed up an age group in the under-20 women’s long jump. She came eighth.