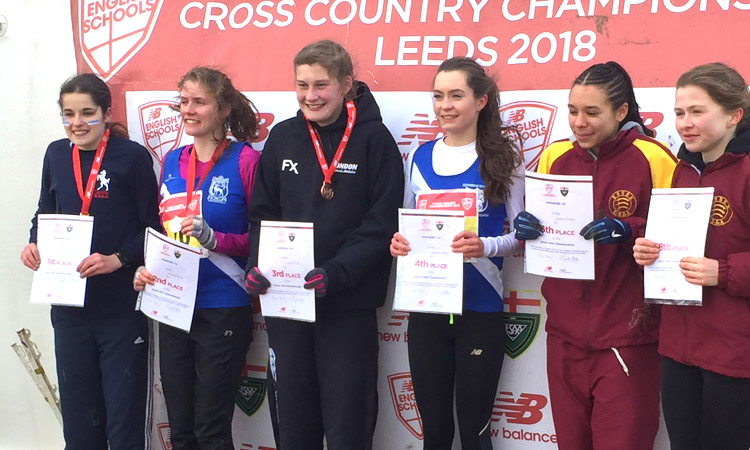 A very chilly day in Temple Newsam in Leeds witnessed an incredible England Schools Senior Girls bronze medal for Saskia Millard, after a long time in the athletics wilderness having been blighted by persistent injury spanning much of the past two or three years.

Millard’s recent win at the London Schools Cross Country championship was her first race of any description since June 2016 and four years have gone by since she claimed the English Schools’ junior girls title at Donington Park.

Her return to top national level performance is a credit to Millard, 17, and coach Wayne Vinton, who oversaw her injury rehab this winter.

Vinton said: “Most athletes would have given up way before she was able to train again. Although she has had dark days this winter and doubted whether she would ever get back, at no point has she given up. As well as being a lovely young woman and an absolute pleasure to coach, she is an inspiration to everyone who knows her story.” Led by Millard, the London Schools team enjoyed tremendous success. The junior girls team came second with strong contributions from Herne Hill scorers Poppy Craig-McFeely in 19th and Phoebe Bowen in 35th. The intermediate girls also placed second and the senior girls were fifth, close behind the third team on the day.

Harriers athletes who scored in the senior girls team were Millard in third place, Zoe Tompkins 59th and Ella Newton 71st.  These performance enabled the London girls to win the overall aggregate trophy, almost 300 points ahead of Hampshire and Vectis.

Chloe Tighe has done her recent racing back home in Australia but is still fully eligible to have become the latest holder of the Herne Hill club senior women’s 3,000m record with a big PB of 9:09.82 after placing fifth in a high quality international field at the Sydney Grand Prix Track Classic meet in her final race of what has been a superb season for her.

Tighe has surprised many observers with her own return to international standard racing, almost a decade after representing her country at the World Junior under-20 championship.

After winning a 1,500m bronze medal at the Australian Athletics Championship on the Gold Coast last month, Tighe has now broken a Harriers record that was held by Herne Hill’s England star Katie Snowden, who herself is now in Australia in preparation for the upcoming Commonwealth Games.

This Sunday sees the rearranged Herne Hill Harriers organised annual Frank Harmer Memorial 10km road race in Brockwell Park. Race entries are still being received online and further additions will be welcomed before the weekend or on the morning of the race.