The U13 boys were closest to medalling with a good opening leg in 11th place from newcomer Lucas Heath, who only joined the club in July and has made a huge improvement in a short space of time. He handed over to Caspian Holmes who shot through the field gaining eight places and moving the team up into third with the 10th fastest time of the day of 13.51.

Dylan Gillies held third place for most of the final leg but the places changed dramatically in the final half mile with several clubs surging through as Harriers finished eighth, still an excellent result for such an inexperienced team. The B team came 28th.

The U13 girls made steady progress with Florence Mills finishing 16th on the first leg before Sophie Jack moved into seventh on leg two. Orla Wright, who had been unwell the night before, maintained that position with the team’s fastest time of 15.13 for another top ten placing. The B team were 31st.

The U15 boys were led off by Freddie Hake, who came in 34th after a very competitive first leg.

Fabian Whitelock gained 20 places to finish leg two in 14th place with the second fastest time on leg two and handed over to English Schools 800m champion Keeran Sriskandarajah, who moved up into ninth place for the clubs third top-ten placing of the day. The B team finished 46th. 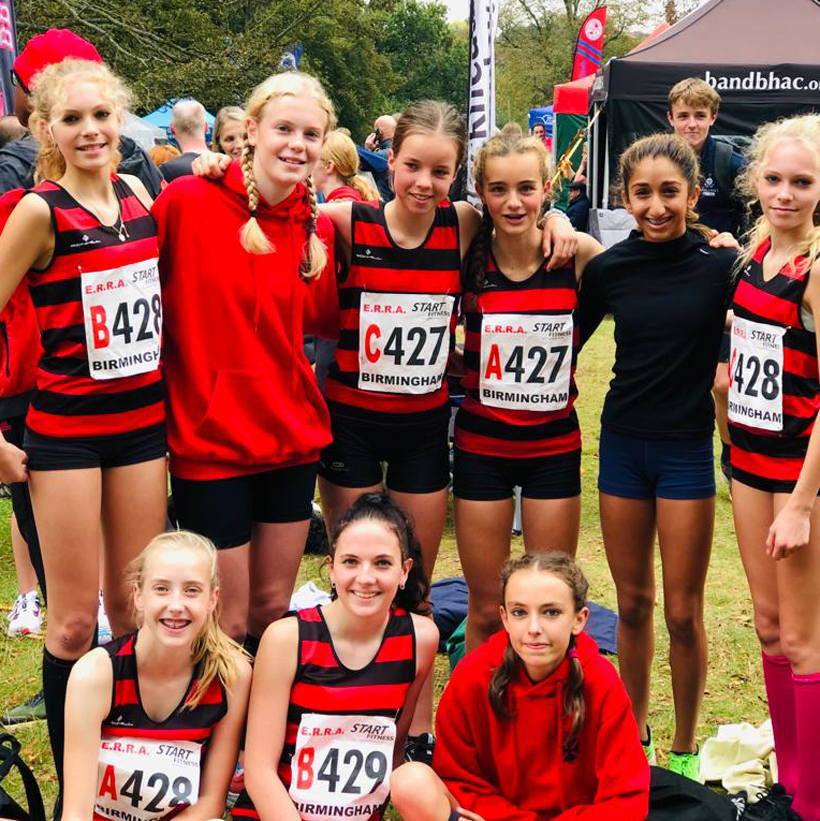 The U15 girls suffered a number of late withdrawls meaning that there were several late changes up until the night before. Harriers were still able to finish three teams in the top 25. Fastest individually were Sophia Sahai (14.47), Orla Carroll (14.49), India Blakey (14.52) and Vivi Marshall (14.53) as they finished 19th, 21st and 25th respectively.

Harriers veteran athletes impressed in the Surrey County Masters Cross Country Championship in Nonsuch Park.in a dry and sunny Nonsuch Park, a venue only secured in the final days before the event following a double booking at the originally planned Morden Park.

Team gold medals were won in the M40 and M60 and the W35 ladies won silver. There were M45 individual medals for Andrew Perfect and Ben Paviour, M60 silver for Mike Boyle and M40 bronze for Ben Millar.

Ross Brown ran a good PB (2:38.44) at Sunday’s Manchester Marathon, followed in by two men who raced the London event seven days earlier. Eriç Dol clocked 2:47.38, only a few seconds slower than his PB the previous weekend, while M50 Jonathan Ratcliffe’s 2:52.31 didn’t quite hit the heights of the week before. He did win the Burnley parkrun on Saturday in 18:40.

The Tooting Common parkrun was dominated by Harriers runners. Andrew Warburton won in 16:39 and Aimee Hargreaves was first female in 19:40. Joe Elliott (17:29) and Sam Camenzuli (17:37) came second and third with Henry Brown clocking 17:45 for fourth spot.