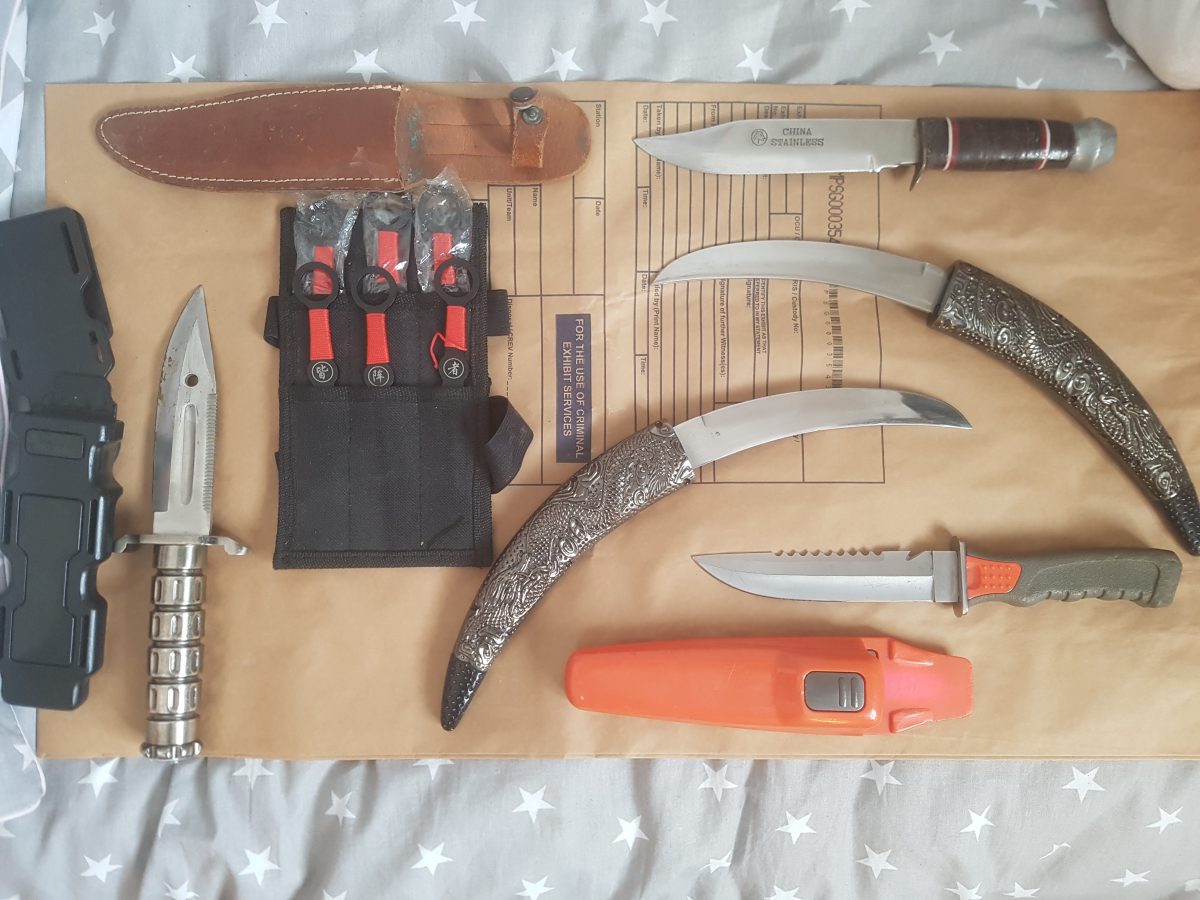 Police recovered a massive haul of blades, a smoke grenade and £50,000 at a premises in Croydon during a series of stings to combat knife crime.

The raid was part of the latest phase of the Met’s Operation Sceptre to fight knife crime has seen nearly 300 arrests and in excess of 250 weapons taken off the streets.

Running from Monday, 12 February, the week of action involved partnership with City of London Police and British Transport Police, as schools broke up for half-term. This activity was carried out in support of a week of national action across all forces.

Throughout the week, officers across the Met recovered a total of 265 knives, six firearms, and 45 other offensive weapons.

A total of 289 arrests were made, including 63 arrests for possession of a knife or offensive weapon.

The Met’s Operation Sceptre Taskforce Team, a group of around 100 officers, were also deployed to work closely with borough officers to target knife crime hotspots.

Examples of some of last week’s activities include:

– Officers conducted an intelligence-led warrant at an address in Croydon and recovered 16 knives, a smoke grenade and more than £50,000;

– 127 knives were recovered from a weapons bin in Islington;

– In Leyton, officers pulled over a vehicle and located a machete under the passenger seat;

– One man was arrested for possession of offensive weapons and a firearm following a warrant executed by officers in Camden. A number of prohibited knives, a knuckle duster, multiple firearms and a crossbow were seized from the property;

– Forensic work carried out by officers following the arrest of a male in Islington linked his fingerprints to a Samurai sword discarded at a scene of disorder in 2013.

The Met continues to call for support from communities across London.

Acting Detective Chief Superintendent Sean Yates said: “This latest week of Sceptre action involved a strong focus on all three local forces coming together to tackle knife crime. Crime does not recognise police boundaries, and neither do we.

“This work is carried out every day across London. There is an ongoing, concerted effort by officers across the Met to tackle this scourge on our streets.

“But such proactive action is only part of the solution as enforcement can only get us so far. This is not just a policing issue, we need everyone to join together to tackle knife crime. The work of our schools officers, communities, partners and the various projects and conferences taking place across the Met are vital in helping to achieve this.

“Today, two families are mourning the loss of loved ones, the two young men murdered in Camden last night. Our thoughts are with them in this incredibly difficult time. At this early stage there have been no arrests, but we are carrying out urgent inquiries to establish the full circumstances.”

British Transport Police Assistant Chief Constable Robin Smith said: “Knife crime takes lives and devastates communities. There is never an acceptable reason for someone to be carrying a knife on the railway network, and we have a range of policing tactics in use to tackle this.

“Throughout the week, we supported our colleagues in police forces around the country and worked with numerous local forces for a shared purpose.”

Inspector Richard Galvin from City of London Police said: “We are committed to working in partnership within Operation Sceptre. As part of this pan-London approach to tackling knife crime, we are determined to deal with this problem wherever it may be found in the capital, including the Square Mile.

“Thanks to this collaborative approach, hundreds of arrests have now been made across London, and knives taken off the streets as a result. Officers from across London will continue working together, on intelligence-led operations with one aim – to root out knife crime and make London a safer place for all.”

Knife bins can be found throughout London as part of the Met’s effort to take knives off the streets. A map showing the location of the bins is available on our website at www.met.police.uk/StopKnifeCrime

If you have information about anyone carrying or using knives please contact your local police via 101 or call Crimestoppers anonymously on 0800 555 111.