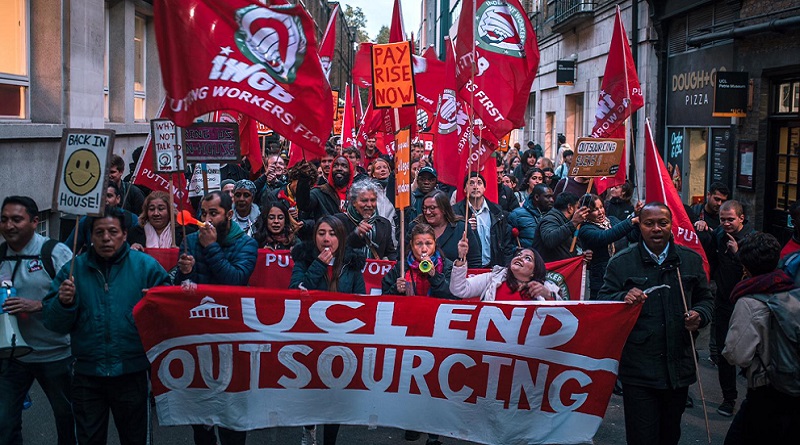 Hundreds of cleaners, porters and security officers at University College London are expected to strike on Tuesday as part of a campaign to end outsourcing and zero hour contracts.

More than 98 per cent of the workers who voted in the ballot backed strike action.

Outsourced workers want the same terms and conditions as directly employed staff, especially when it comes to sick-pay entitlements.

Workers are not being paid anything for the first three days when off sick. The union says they receive worse pensions, holiday pay and parental leave than their in-house colleagues.

They claim they are also more likely to suffer from bullying and discrimination than directly employed workers.

The strike, the university, would be the largest action of outsourced workers in UK higher education history, according to The Independent Workers’ Union of Great Britain (IWGB).

It balloted almost 300 workers about their terms and conditions.

Following the launch of the campaign in October, the IWGB said the university had made only vague statements regarding an improvement of terms and conditions for outsourced workers, without offering any guarantees, nor a clear timeline.

IWGB University of London branch chairman and former UCL cleaner Maritza Castillo Calle said: “Outsourcing forces us to work sick and injured, to work all our lives and still retire in poverty.

“For decades, UCL has treated its majority migrant and BAME outsourced workers like second class citizens, condemning them to a system of bullying and discrimination.

“By voting overwhelmingly in favour of strike action, UCL’s outsourced workers have sent the university a clear message.

They will no longer stand for half measures and endless delays. They want equality and justice, and they want it now.”

The strike ballot specifically demands that the facilities management companies that manage the security and cleaning contracts, Axis and Sodexo, give the outsourced workers the same terms and conditions as UCL’s direct employees.

The IWGB has launched an appeal to raise money for the strike fund.

While direct employees of UCL can receive up to 26 weeks of pay when they are off sick, outsourced workers are on the statutory minimum.

This means they receive no pay on the first three days they are off sick, after which they are entitled to just £94.25 a week.

Over the past year the IWGB has also documented what it says are a number of severe management failures and discriminatory practices by the outsourcing companies.

The IWGB brought complaints on behalf of 30 Axis security officers who were owed more than £15,000, when the company allegedly failed to properly pay their holiday pay over a period of three months, between December and February.

Following these formal complaints by the University of London branch secretary, the money was paid, but they say there have been other instances of non-payment of holiday pay since.

Part of the problem is that no talks have not taken place with the IWGB because UCL only recognises Unison.

A UCL spokesman: “UCL has committed to ensuring that security, cleaning and catering staff will receive the same or equivalent pay and benefits as directly employed staff, following constructive negotiations with our recognised trade union Unison.

“Our colleagues working in security, cleaning and catering fulfil essential roles at UCL, on which we all depend. We have listened carefully to their concerns and we are acting.

We will continue to listen and respond to concerns raised by our community.”

Axis was approached for a comment, but had not responded at the time of going to press.