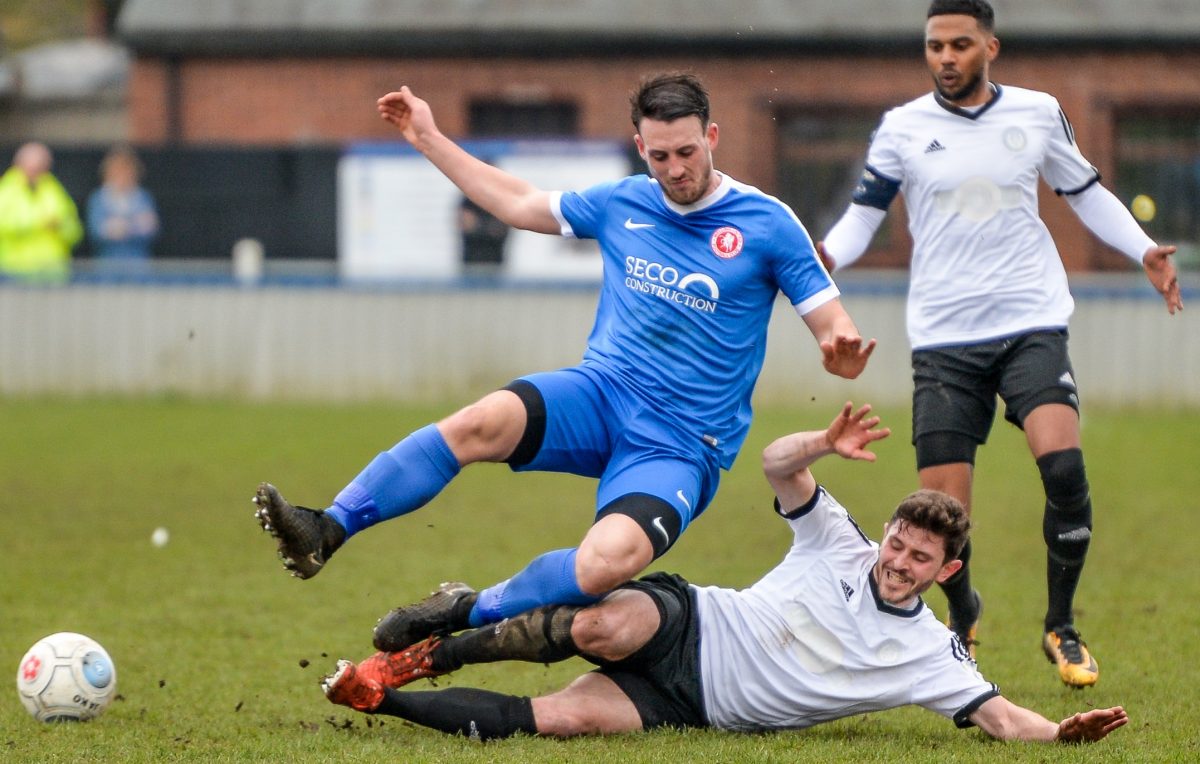 Two away victories in a week have banished the disappointment of their last home defeat and propelled Welling United into sixth place in National League South.

Following their 3-1 victory at Bognor Regis Town on Tuesday night, they went one better with a 4-1 win at Hungerford Town.

They also showed their adaptability to different playing surfaces as the Bognor pitch was an excellent one whilst Hungerford’s slope and the boggy conditions resulted in a different type of game altogether.

Due to injuries to Ben Jefford, who failed a late fitness test, and Jack Parkinson, Welling manager Jamie Coyle was only able to name three substitutes but as only three can come on during a match it was not disastrous.

Only six minutes were on the clock when Hungerford went ahead. Louis Soares sent in an excellent near post corner that player-manager Ian Herring met with a solid header that gave Bailey Vose no chance.

Jack Jebb came close to equalising with a volley that flashed just over after Coyle had headed back Callum Driver’s free-kick.

Using the slope well, Hungerford enjoyed a good spell but were restricted to shots from outside the area on the whole. Rhys Tyler and Louis Soares were both well off target before Lewis Leigh-Gilchrist had a shot saved by Vose. Richie Whittingham also fired wide as Hungerford looked to increase their lead.

It was not one-way traffic though and Adam Coombes went for a stumbling header from Jebb’s cross but failed to get a good connection and it went wide.

Herring again lost his man from a near-post corner from the other side but Vose was able to save his flicked volley.

As the half drew on Welling came to terms with the conditions and started to ask questions that the Crusaders struggled to answer and they drew level 10 minutes before half time. Jamie Philpot controlled a long pass before executing a perfect long range lob over debutant goalkeeper Oliver Davies.

Soon after he saved well from a Coombes’ free-kick but the last piece of first half action was when Whittingham fired well over.

Early in the second half Coombes had another shot saved before Welling went ahead. Olumide Durojaiye sent over an excellent cross and Coombes’ booming header went in off the post and then Davies.

He almost added a further goal with a goal that would have been an internet sensation had it gone in. Coombes chested down well before his bicycle kick from 20 yards beat Davies all ends up but flew back out off the crossbar.

The game was as good as finished as a contest when Welling scored their third. Coyle, not wanting to be outdone by his player-manager counterpart, collected a half-cleared free-kick on the edge of the area and fired into the bottom corner with Davies again helpless.

After that, Welling went close on several occasions. Philpot put Bradley Goldberg away but he shot straight at Davies then Coombes broke away down the left wing before cutting in and firing just beyond the far post.

Eventually, Welling scored the fourth goal that they deserved when Philpot rose to float a header under the bar from Jebb’s free-kick.

Nicholas Bignall might have pulled one back for Hungerford but Welling continued to press and Goldberg knew it was not to be when Davies did well to keep him out  by blocking a shot with his out-stretched leg.

If it wasn’t to be Goldberg’s day as an individual, it was an excellent team performance as they now prepare for the Easter period and run-in with plenty of confidence.