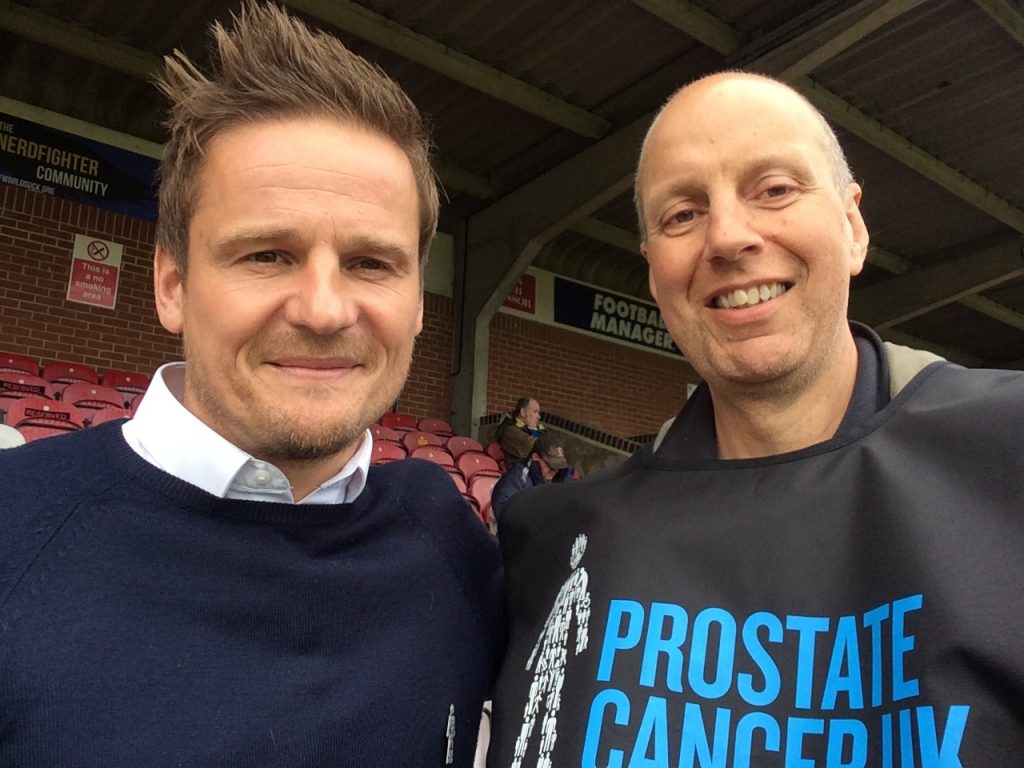 AFC Wimbledon fan Kevin Webber, while in the middle of his chemotherapy walked 15 marathons in 15 days in 2016 and 2017 alongside Sky Sports presenter Jeff Stelling, to encourage men to get checked for prostate cancer.

Prostate Cancer UK  made him its ambassador at the League Cup Final at Wembley in 2016.

His next challenge in four weeks’ time is the 6633 Arctic Ultra, which involves pulling a sledge for 350 miles across the Arctic in -50C temperatures.

He said: “My doctor said I could not do marathons – that no one doing my sort of chemotherapy can. But I have run two marathons since then. And I can raise money for Prostate Cancer UK at the same time.

“I see every day as a gift. If someone gives you a present, you don’t put it in the cupboard and refuse to use it.

“People’s husbands or wives leave them, they lose their jobs – lots of things can go wrong.

“You can give up, say life is terrible, woe is me. Or you can find a way to do something worthwhile.

“People who give up, when they have it, give me the hump. I want to make the most of every day.”

His charity work has now led to him receiving a Points Of Light award from Prime Minister Theresa May. The award recognises outstanding volunteers making a change in their community.

In a personal letter to Kevin, the Prime Minister said: “You have responded to tremendously difficult personal circumstances with enormous courage and strength.

“Your inspiring fundraising work for Prostate Cancer UK demonstrates your dedication to ensuring that men seek early diagnosis and I wish you every success in your extreme fundraising challenge in the Arctic later this year.”

The citation on the website for the Prime Minister’s Office at 10 Downing Street, said: “Kevin
Webber, from London, has spent the last three years raising over £200,000 for Prostate Cancer UK, despite being told in 2014 that he only had two years to live.”

Kevin, who became a Dons fan when his family were living in Motspur Park in the late 1970s, said: “It has become my mission to raise awareness and funds for Prostate Cancer UK while I am still here.

“My legacy is to try to ensure that other families will not have to go through what mine are right now and in years to come when I am no longer here.

“By undertaking gruelling ultra-marathons and inspiring friends and colleagues to do their own challenges, we have raised more than  £200,000 in those three years.

“I feel quite emotional and humbled that people think what I have done is in anyway special so to be honoured in this manner is unbelievable and a memory that my family and I will have forever, although much of the thanks must go to those who have supported me in so many ways.”

Kevin was diagnosed in November 2014, three months after he started having symptoms.

He was told it had already spread and that he would might have two years to live – and would be lucky if he had more than three years.

But the relationship director for RBS decided not to mope. He was soon doing marathons and ultra-marathons.

“I used to run a lot – in my 20s I did the Marathon Des Sables – running across the Sahara,” said the father-of-three children, all in their teens.

“I was doing two or three big races a year in a very amateurish way.

“The week before my first chemotherapy session, I had run 20 miles. The day after, I thought I could give up or go again.

“I could only run three miles. It was very painful.

“Cancer will take away lots of things but I am determined it cannot take away running.

“This way, I can prove to people in a rubbish situation that you should not give up.

“I was told I would not live 10 years – I know I won’t ever be a grandad. But I focus on what I can do. I can still talk, go to work and see my friends. Little things make a massive difference.”

“His drive, determination, and passion to raise awareness of a disease – which kills one man every 45 minutes – is incredible.

“Kevin is an extraordinary man who, despite his own prognosis, continues to take on extraordinary challenges and wholeheartedly deserves this award.”

One thought on “‘I find a way to do something useful’”