“I’ve always loved that part of the game – smashing people.” That admission by Daniel Ballard suggests he is going to be a very big favourite with Millwall fans.

The defender, 21, has signed up on a season-long loan from Arsenal.

And the physical challenge of the Championship is unlikely to faze the combative centre-back, who got stronger and stronger during a loan at Blackpool which ended with League One play-off victory at Wembley in May.

The Seasiders were keen on Ballard signing up again but he admits that Ben Knapper, Arsenal’s loans manager, helped in the decision-making process – as well as a positive reference from Northern Ireland international team-mate Shane Ferguson.

“We saw this as the next step up,” Ballard told the South London Press. “It’s a new challenge, but hopefully one that will benefit me in the long run. The goal for Millwall is to go and get promoted, which will be extremely tough.

“It was better that I was going to be at a team that is hopefully going to be pushing for the upper half of the table rather than just trying to stay in the league.

“I’d say there were three Championship clubs who were very keen. It was about trying to decide on the best one.

“They [Arsenal] advise me as best as they can, for my benefit. It’s a call made by both of us, together. They do it with my best interests.

“It is about trying to gain that experience. I had a good year at Blackpool, I probably couldn’t have asked for anything better. This year it is about doing the same. It’s a much bigger task – playing in the Championship – and that will bring it’s own challenges.

“Being in a stable, ambitious team – with a lot of experienced and good players around me – will help me.

“I sent him [Ferguson] a message to see what it was like [at Millwall]. He said it was one of the best changing rooms he’d been a part of – that the lads and staff were great. He definitely helped with the move.”

Ballard has had to overcome adversity. He was released by the Gunners at the age of 16 but returned to score twice as an ever-present in their side which reached the FA Youth Cup final. His first professional contract came two years after being let go.

“I was never really the best player at Arsenal,” said Ballard. “Especially at those younger ages. At U16 they didn’t offer me a scholarship. I was a lot smaller and I wasn’t very strong or fast. I left, and ended up breaking my ankle.

“It was a really low period. I didn’t know what I’d be doing next year.

“I saw all my mates at Arsenal go off to digs. They had started their journey and I was still club-less. I had to sign up for A levels.”

But the then Arsenal academy manager Andries Jonker, who had just replaced Liam Brady, asked Ballard to fly out to Germany to play in a friendly against Bayern Munich.

“I was about to sign at Stevenage and he called me – they needed a spare player,” recalls Ballard. “I went along and played the second half. It went really well.

“On the plane journey home they offered me a scholarship. It was a crazy four or five months.

“To get back and get an offer from Arsenal was a big turnaround.”

The Gunners allowed him to complete his A level – in maths – as well as kicking on with his football career.

“I put my head down and really grafted hard for the next two years, when I knew I’d either get released again or given a pro,” said Ballard.

“I was fortunate enough to get given a pro and then the next year I signed another one. It’s been upwards since I was given that chance.”

Blackpool kept 15 clean sheets in the 30 matches that Ballard featured in. He played the full 90 minutes in 17 of the final 21 matches before the play-offs.

Ballard got an assist in the semi-final second leg 3-3 draw with Oxford United before coming off with a groin injury at half-time.

But he was fit just in time to return to the starting line-up and play the entire tie at Wembley, a 2-1 victory over Lincoln as Neil Critchley’s side  returned to England’s second tier for the first time since 2015.

“It took me probably the first half of the season to get that bit of consistency,” said Ballard. “It’s a massive step up, from youth football to regular men’s football.

“It took my body a few months to adapt to it. But once I did, I was flying towards the end of the season.

“We put together that massive winning streak and I was playing every game, a run of maybe 20 games Saturday-Tuesday in a row – which I didn’t think I’d be able to do.

“I always had in my mind I would be fit to play in the final. But when I think back to it, if it had maybe been even a day earlier then potentially I might not have been ready. It was probably more touch and go than I thought.

“Along with my first international game that was up there as one of my best days of my life – my biggest achievement.

“There is no better feeling of winning something like that. I never dreamt of being able to win a trophy at Wembley. It was a really, really special day.

“I did really enjoy my time there. It was a big decision not to go back there this year, which shows the pull that Millwall have.” 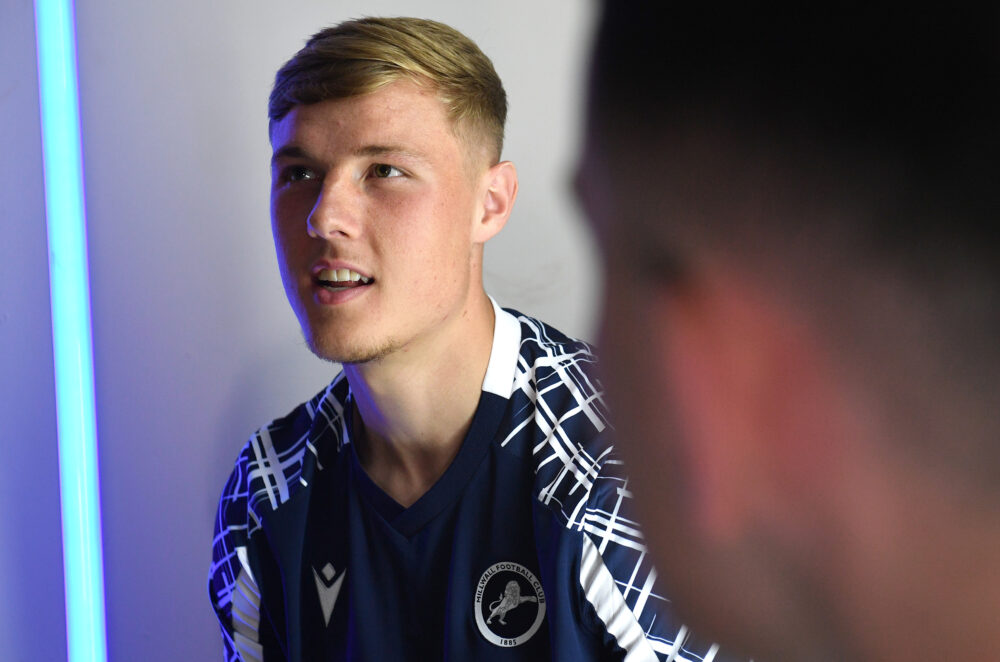 Ballard made his international debut against Romania and also started their 5-1 defeat to Norway in the Nations League. Borussia Dortmund’s Erling Haaland – one of the hottest properties in world football – scored twice.

Ballard said: “It’s strange. You see these people on the telly and the news all the time, then I’m looking at him across a tunnel.

“It was a big realisation that there has been a lot of hard work to get here, and now you’re not watching these guys – they are your opponents. It’s a nice feeling.

“It’s tough playing against the best but really enjoyable.

“You get to test yourself, that’s what you want – to achieve as much as you can.”

Ballard has certainly come a long way from the defender at Fairlands Youth, a Stevenage-based club, who was snapped up by Arsenal at the age of eight.

It’s when talking about those formative years that he makes the admisson about “smashing people”.

“I used to hate losing, so that was the best way of winning,” he said.

“It doesn’t happen as much nowadays, especially at centre-back, you don’t get those big tackles. But it’s something I enjoy.”

The Den can be a challenge for some players, but one attribute that is always likely to ensure a good reception is not shirking away from a challenge.
Ballard admits that playing in such vociferous surroundings was “one of the driving factors” in choosing the Lions.

“Millwall have some of the most famous fans in the world,” he added. “It will be a huge advantage to be able to play with that.

“Even if it is just a loan spell, it will be nice to say I’ve played at The Den and had those fans behind me.