Streatham player-coach Michael Farn admitted that it’s happy days in the High Road after they extended their lead at the top of National Ice Hockey League South 1 with another four-point weekend.

On a weekend of contrasting opposition, the South Londoners faced bottom team Milton Keynes Thunder and then second placed Invicta Dynamos in the space of 48 hours.

On Saturday evening in front of another healthy crowd, Streatham extended their 100 per cent home record with a 11-4 win over MK Thunder.

A hat-trick from Vanya Antonov, two each from man of the match Ziggy Beesley and Josh Ealey-Newman, plus lone goals from Milique Martelly, Ben Ealey-Newman, Danny Ingoldsby and Ben Paynter sealed a convincing win. 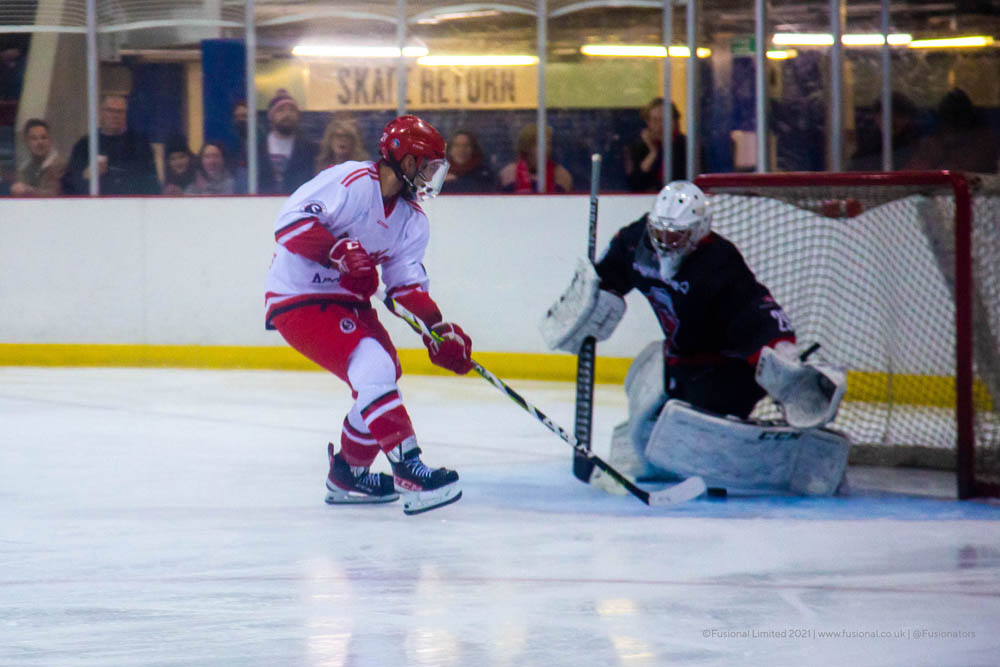 Youngster Jack Hoppes also got his first point for the team with an assist on his debut.

“We fell back into bad habits and went behind quite early in Saturday’s game,” explained Farn.

“But we pulled it back before the end of the first, and then turned on the style. It was important for us to keep good habits given how big the game 24 hours later against Invicta was, so I was pleased with the way the lads kept going.

“It was especially good to give teenagers Stanley Ratcliffe and Jack Hoppes some ice time and they held their own on a night lots of the lads picked up points.”

Streatham travelled to old rivals Invicta on Sunday. The Dynamos have strengthened considerably this season and, along with Solent Devils, appear to be the strongest challengers to the RedHawks for silverware.

Backed by a noisy contingent of travelling supporters, the South Londoners came from behind twice to seal another memorable victory with a 7-4 scoreline perhaps masking how close the encounter was.

Antonov bagged his second hat-trick of the weekend with a superb individual performance, adding to goals from Ben Ealey-Newman, Josh Ealey-Newman, Ingoldsby and man of the match Martelly.

“It was never going to be a game full of finesse and was always going to be about hard work and desire, especially in front of a big crowd making lots of noise.” said Farn.

“They edged the first period and deserved to lead, but were playing two lines mostly, so as the game went on we rolled our three lines and it gave us an edge with our depth.

“We made it quite comfortable once we got our noses in front. The points give us a nice gap both in the league and in the cup group.”

Streatham host Chelmsford Chieftains in the round robin group of the London Cup on Sunday (6.45pm).