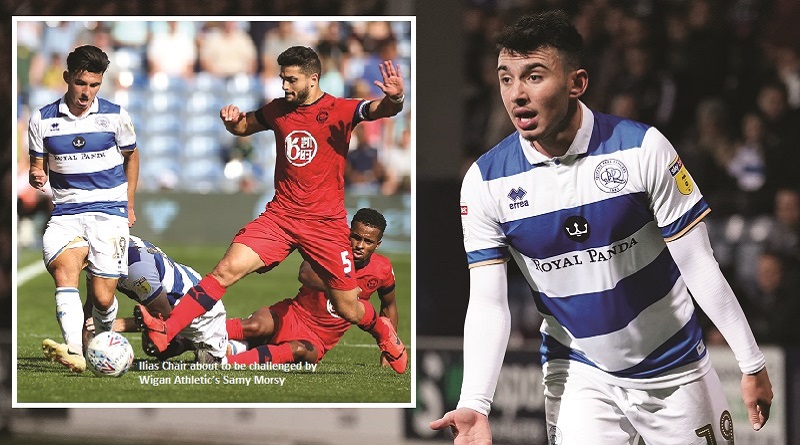 Ambitious Ilias Chair says he is determined to play in the Premier League – even if it means having to leave QPR to do it.

The 22-year-old, who recently signed a new three-year contract, has looked a class act at times this season and appears to be very much in Mark Warburton’s plans after being frozen out during Steve McClaren’s reign.

And the Moroccan, who arrived from Belgian club Lierse in 2017, is convinced QPR have what it takes to mount a credible promotion challenge this season to regain their Premier League status.

But he admits he will consider jumping ship if he is unable to emulate another former Moroccan star, Adel Taraabt, in leading the Hoops back to the promised land.

“I think there isn’t a single team whose goal it isn’t to be in the Premier League. Every hierarchy, manager and every player wants to play in the world’s best league,” he said.

“For now, it’s just a dream and a hope but we as a team take it game by game, and the Championship is so open this year and anything can happen. Why not being that team that surprises everyone?”

“We have a young talented squad with the likes of Ebe Eze, bright Osayi-Samuel and myself and the bigger picture is getting this club back where they belong, the Premier League.

That’s our aim and the dream we have that we want to give to the QPR fans.

“Right now, QPR is definitely the right club for me to develop, a good stepping stone but who knows what the future is holding?

“We all have dreams and aspirations of playing in the Premier League and hopefully I can do that with QPR, but if it isn’t with QPR then it will be elsewhere.

It’s a big dream that I want and will fulfil.”

Rangers got off to a flying start this season but a poor run of results last month triggered a downward spiral as their defensive frailties were punished.

They went into last night’s home game against Nottingham Forest looking for a first win in six.

But Chair is confident of an upturn.

“We are just suffering a lack of confidence right now, which comes only if you win games,” he said.

“But we have a good opportunity in the next few games to get our confidence back. All we want is to be back in the mix for promotion.”

Comparisons with Taraabt are perhaps inevitable, given the similarity in position on the pitch and nationality, although Chair will do well to spark the levels of adulation fans bestowed on the outrageously gifted Taraabt.

Chair says he feels honoured by comparisons but wants to be his own man.

He said: “Being compared to Adel is a dream for me because he is a big player who did massive things for the club, so hopefully I can achieve what he achieved with QPR.

“But I don’t want to be the ‘new Taarabt’, I want to create my own history here and be the ‘first Ilias Chair’ at QPR.

It would be nice however to succeed where he succeeded with this club.”

Taarabt scored 19 goals in 44 appearances in the promotion-winning 2010-2011 campaign, as he won the Championship Player of the Year award.

The stakes are high but Chair appears to have the personality to emulate his compatriot.

He puts it down to decisive action at the start of the year when he handed in a transfer request after growing tired of being overlooked McClaren.

He was farmed out to Stevenage on a six-month loan deal, a move he admitted to ruing initially, but which he now believes has paid dividends.

“Without disrespecting the club but when I joined Stevenage the first thought that crossed my mind was: “Are you really going to Stevenage, Ilias?

“In hindsight I believe that it’s the best decision I ever made in my career as the club gave me the opportunity to play week-in week-out and to show to everyone that I am a good player. I proved there that I belong at a higher level and now I am back at QPR.

“Football goes so quick. I think that I have become much more mature and experienced as I learned how to play in men’s football. Playing for the first team of Stevenage is not the same as playing for QPR’s under 23s. Playing against grown men really helped me a lot.

“The QPR players knew that I was a good player because they saw me in training every time but maybe [since I came back] I have gone up in their estimation now because I play week-in week-out. So they are more careful in training with me in the way they defend against me.

“I am very grateful that experienced players such as Nakhi Wells and Angel Rangel help and mentor me every day”.