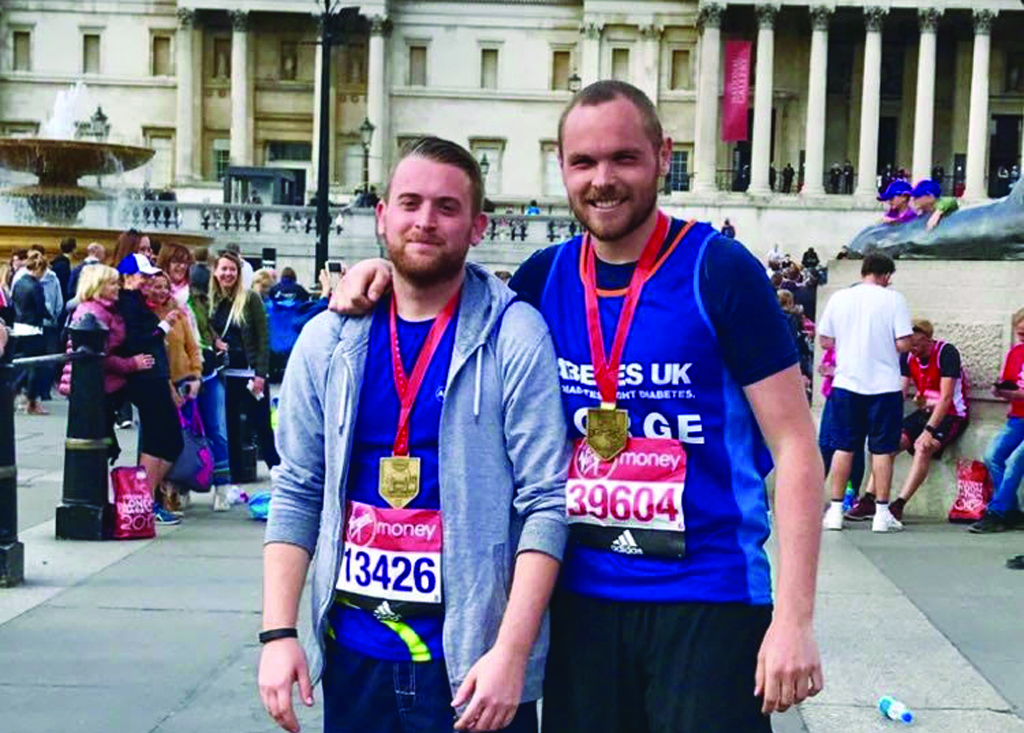 A policeman who took on knife-wielding terrorists in the London Bridge terror attack is to repay the hospital that saved him by running the London Marathon.

Charlie Guenigault, 26, was on his way home from work in Peckham last June when he was the first policeman on the scene, helping victims of the killers, who turned on him during the rampage, which left eight people dead and another 48 injured last June.

He was stabbed five times, but is now preparing to run the 26.2 miles of home turf on April 22, watched by the people he almost died protecting.

The 26-year-old, from Bexley, will be fundraising for the King’s College Hospital Charity, which raises funds for the hospital where he spent 70 days, undergoing five operations.

“I want to give something back for all the help they gave me – but also for what they did for the families of Grenfell and all the work they do every day,” he said.

Charlie has been told he would have died if his colleagues had not taken him in an unmarked cop car to the emergency ward – the ambulances were not allowed to approach as the bloodshed continued.

He was alert for 90 minutes, during which a mate from training school, Sergeant Steve Simpson, kept talking to him to keep him conscious. Charlie was then put into an induced coma. When he woke up he had 17 stitches in his head and neck and still more in his back. His lower stomach had to be opened up so surgeons could staple his back wounds from the front.

He had just left the Duke of York Pub in Borough with colleagues watching the Champions League game between Juventus and Real Madrid, and was heading for London Bridge railway station, when, seconds into the start of the attack – he later found out – he heard someone shout: “Help – I’ve been stabbed!”

“Someone had got hold of his arm and he fell to the floor,” said Charlie. “I went over expecting to give him first aid and wait for an ambulance to arrive. I saw a fight between six or seven people and Wayne [Marques] getting beaten up. I knew I had to give him the chance to get away.

“It turned out they were the people with knives. I went in and don’t remember what happened in the flurry. There were three people standing in front of me not looking too happy. They went for me. I did what I could to protect my body with my arms. They got my back then my head, another in the back and the back of my neck. I started to feel a bit tired – that I might need to get on the ground. I fell to the floor and was looking up. But I was worried they would finish me off in the chest. So I pretended to die – I looked to the left in the hope they would think they had done enough.

“After a few seconds, nothing else happened so I rolled onto my chest to allow someone to stop the bleeding from my back. I asked one member of the public to put his knee on my back. I asked another to keep me calm, talk to me and keep me awake. Then other policemen put me in an unmarked car and rushed me to hospital. If we had waited for an ambulance I would not have made it.

“I don’t remember feeling much pain. I felt the knife going into my back and head. But there was so much adrenaline – I was just focused on staying alive. I am not sure how much blood I lost – but I remember feeling it coming out of my head and pouring down my face and seeping through my clothes.

“It was touch and go for a time. I didn’t think I was going to die but there was a couple of days’ anxious wait for my family. I can’t remember much about waking up. It wasn’t until a day later that I was more alert. There were some sad faces then.”

Charlie has to take penicillin twice daily since his spleen was removed in the first operation. “The return of the Premier League season helped get me up and about,” he said. “But I am a Chelsea fan, so I was soon wishing it hadn’t.”

He was invited to Stamford Bridge’s Platinum Suit for the Champions League game against FK Qarabag of Azerbaijan on September 12. The Blues won 6-0.

He returned to running days after the end of a second two-month stint in hospital, where he had his lungs re-inflated and a hole in his stomach sealed.

It will be the second time he has run the capital’s biggest running event – last year he raised £800 for the Alzheimer’s Society, completing the course in 4hrs 26mins. His next big training step is the Big Half, also largely on home turf, on March 4.

“I still think I can do it after everything that’s happened,” he said. “I didn’t get a place in the public ballot but someone made some calls to the organisers and I was given a place. It will be good to get back to fitness and raise awareness of the NHS’s amazing work at the same time. I am already up to 10 mile runs.

“There are so many people I want to thank. The list could go on for ages. But I wouldn’t want to miss anyone out. This is a way of showing how grateful I am.

“I would like to go back to work in Southwark – and doing what I do. It is good for my family and friends and work colleagues to see me back on the mend – that if something bad happens, it is not the end. I am challenging myself. Any money I raise won’t make a massive difference to the hospital but it recognises the huge amount of work put in by doctors, surgeons, nurses, canteen staff and everyone there. They all make it work together, doing their best on the resources they have got.”

Last October Met Police’s deputy commissioner, Craig Mackey, said at the Pride of Britain Awards: “For PC Charlie Guenigault there was no such thing as ‘off duty’. That summer night in Borough Market, Charlie ran towards the terrorists, putting himself in danger to protect the public. Without thought for himself, his bravery undoubtedly helped others.”

To contribute to Charlie’s total, which is already past £1,000, go to https://uk.virginmoneygiving.com/fundraiser-display/showROFundraiserPage?userUrl=charlieguenigault&pageUrl=4